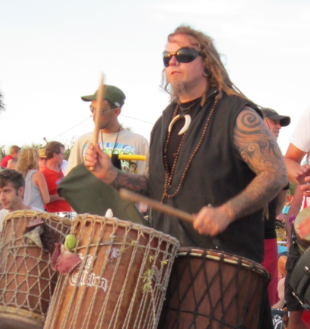 Shawn Bowen, is a familiar attendee of Siesta Key’s Sunday night drum circle. I met him at his workspace retreat, conceived by one of

the original Selby Garden landscapers and hidden at the end of a canopy road, landscaped with lush exotic Florida trees and plants.

WPT: How long have you been playing at the drum circle?

Shawn: Since 1996. It was at access #8. There were only about 10 people there. I don’t know how long they had been playing before that. By the next year, it really started building up until the police, responding to noise complaints, told us to move it down to the public beach, where it still is today.

WPT: How did you hear about it?

Shawn: I was in a band named, “Neurotica”. We did pretty well. Brian Johnson of AC/DC, discovered us. We got signed and went on the OzzFest tour with Ozzy and Rob Zombie. The bass player from my band, Miguel, was really into drum circles. He’d travel to attend festivals. I was a metal player who didn’t even know what a djembe was, but he introduced me to djembe playing and the drum circle on the Key, so we started going to it whenever we were in town. We liked playing music in such a disorganized fashion, which was such a contrast to the tour, where everything had to be tightly rehearsed and very precise, in order to deliver the best caliber show, in the arenas.

WPT: What makes the drum circle inviting to professionals and beginners, is that everyone just meets where they feel the music. What all takes place?

Shawn: Drumming, dancing, hula hoops, I’ve seen a drum set, djembes, hand drums there’s rain sticks and didgeridoos and guitars. At the Siesta Key Drum Circle, its really just anything goes. I started playing the djun djun, because no one was playing it out there when I started. It adds a nice bass to the drum circle, so I enjoy playing it.

WPT: How long have you been playing guitar?

WPT: How did you get here?

Shawn: I was playing in heavy metal bands in Ohio and made friends with members of a band named, “Havoc”, who were based out of Sarasota, and had won a contest at a music store. Their prize was to come to the sister store, in Ohio, and record. Their bus broke down, they became kinda stranded in town for about a year, and we all became friends, partying and jamming at their band house. When they broke up, and returned to Sarasota, I moved down too, and started working with their former bass player. I don’t like the cold and have never looked back.

WPT: So, from that band you went on to Neurotica?

Shawn: Yes, it was a great time. Brian Johnson, worked with us, produced our first album, gave us a song he’d written and even sang back-up vocals on it. When he came to the studio to work with us, he brought a guitar that had been used for the Everly Brothers’ “Wake up Little Susie”.

WPT: What did you do when Neurotica finished touring?

Shawn: I sublet a space in a head shop, where I’d work when I was home, and started dealing in drum circle type, exotic world music instruments.

WPT: What are you up to now?

Shawn: In my band, “Digi-Christ Super Drum”, I play electronic drums, guitar and some flute. I am a graphic artist and I do audio and video production. I have a recording studio in the house, where I do film scores…and I blow glass, as well.

Shawn: Digi-Christ Super Drum just got two songs in an upcoming feature length horror film called, “Evangeline”, being shot in Vancouver BC, and directed by Karen Lam. I’m looking forward to getting more into film scores, because I enjoy working here, in the studio.

WPT: Do you still plan to play live?

Shawn: Yes, I’m in a band made up of members from Neurotica. We plan to play out soon, but of course, I’m always out at the beach, playing in the drum circle.

WPT: What is your advice to beginners at the drum circle?

Shawn: Relax, and enjoy yourself, but be aware and respectful. Many people come to let loose and even party, and that’s fine, but I’ve seen people go too far and start hitting other peoples’ drums and generally being obnoxious. Many people observe the drum circle on a spiritual level. It’s there for everyone to enjoy their own experience, and it’s important to preserve that. We want everyone to feel welcome.

The circle begins about an hour before sunset and continues until after dark.

The restaurant at the Public beach now features weekly live music. See the calendar for their schedule.