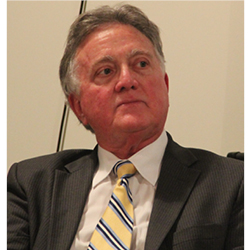 From term limits to websites to third-degree felonies, the 2017 Florida Legislature enacted a number of “bizarre laws” affecting condominium associations, a Sarasota attorney who has specialized in condominium law since 1980 told about 60 people during the Jan. 23 meeting of the Siesta Key Condominium Council.

For many years, Dan Lobeck said, “I thought the condominium associations were probably the second most highly regulated industry in the state of Florida, second only to nuclear power.” In the aftermath of the 2017 legislative session, he added, he believes the associations have taken the top spot.

Lobeck explained that a number of facets played into why the Legislature “did what it did to make laws so burdensome and complicated on condo boards.” A key factor, however, was a Miami Herald expose about unethical and illegal actions involving condo boards and managers, he pointed out. After the paper published its findings, the state attorney in Miami-Dade County convened a grand jury, which offered recommendations that ended up in bills that were enacted.

The laws Lobeck focused on went into effect on July 1, 2017, he noted.

First, directors who serve two-year terms may not be elected more than four consecutive times. The idea behind that, he said, was that “if you’re serving your community for an extensive period, you must be abusive … even though some of the best directors that I have seen … have really devoted themselves to the community over the long haul, and the community appreciates that.”

The term limit can be waived by a vote of two-thirds of the membership, he added, and in circumstances when not enough eligible candidates are available to fill the vacancies at the time in question.

Fortunately, he said, both the state and condo association attorneys in Florida have taken the position that the four consecutive terms would have to start after July 1, 2017.

That law does not apply to directors who serve one-year terms, Lobeck noted, and case law in the state effectively has prohibited terms of three years or longer.

Another new law makes it illegal for use of a debit card issued in the name of an association or billed directly to an association. “Credit cards — you can steal money with [them],” Lobeck joked, eliciting laughter from audience members.

A management company could use a debit card to draw on association funds, he continued, as long as the association name is not on the card.

Then Lobeck addressed new criminal penalties, “as if there wasn’t enough discouragement to volunteer to serve on your board.”

Moreover, “[Legislators] made at least half a dozen mistakes in the law,” he pointed out, as many of the crimes are not listed as such in other parts of the Florida Statutes. “You have to amend the criminal statutes to create a new crime.”

For example, he said, one new provision makes it a third-degree felony to forge a ballot envelope or voting certificate used in an election. “But they didn’t make forgery of the outer envelope a crime,” Lobeck noted.

Yet another action that results in a third-degree felony charge, he continued, is the destruction or refusal to allow inspection or copying of an official record of a condominium association that is accessible to unit owners, in the furtherance of any crime. For example, Lobeck explained, if someone stole money from an association, and a cancelled check would prove that, “it’s a felony to destroy [the check].”

Any director or officer charged or indicted for any of the crimes related to forgery, theft or embezzlement, or the destruction or withholding of records, is barred from serving as an officer or director of another association,” he continued.

If an officer or director is charged with a crime, Lobeck continued, that person is to be removed from the board and a temporary replacement put in the person’s place. “So much for the presumption of innocence.”

If the accused later is cleared of the crime, Lobeck said, the person can go back on the board.

Lobeck then talked of new financial reports, including the necessity for associations to file a form naming every institution where it maintains accounts. That makes it possible, he noted, for “an aggrieved owner [to] find out where you keep your money.”

In response to a question, he said that document should be filed at the same address where the association provides its annual report.

For associations with 150 or more units, he continued, the Legislature has required “a huge complicated website” by July 1 of this year. “This is totally insane as to what has to be on this.”

Among the material that has to be posted, he pointed out, is not only the agenda of any board meeting and documents to be voted on, but also “any other document required for the meeting,” and the latter has to be put on the website at least 48 hours before the meeting. That means any issue that will come up at the session should be posted on the website, he said.

The website also has to contain a password-protected section including not only all the board materials, Lobeck continued, but also the recorded association declaration and bylaws; the filed articles of incorporation, with all amendments; the association rules; bid summaries, which must be available for a year; the annual financial report; the annual budget; and “any proposed financial report to be considered at a meeting.”

When asked whether a management company can operate the website, Lobeck replied that it could. He added that the website “just has to be capable of access by the board without management.”

Finally, in response to another question, Lobeck said “a fairly recent law” makes it legal for board members to “communicate very freely by email,” as long as they do not take an official vote on an issue via email.