Transportation on and around Siesta Key

The city of Sarasota began work May 29 on resurfacing a 1.4-mile stretch of Osprey Avenue between Siesta Drive and Bahia Vista Street. The resurfacing will be done in phased segments. The first segment of Osprey Avenue, from South Drive to Boyce Street, is expected to be completed by the end of July. To minimize disruptions at nearby Southside Elementary School, work was coordinated to begin shortly after the school year ends.

Osprey will remain open to two-way traffic throughout the duration of the project, with construction anticipated to take place between the hours of 6 a.m. and 9 p.m. Monday through Friday at this time. No detours are expected, and businesses along Osprey Avenue will remain accessible throughout construction. Future segments, and their tentative schedules, include: Boyce Street to Arlington Street (August-October), Siesta Drive to South Drive (November-January), Arlington Street to Bahia Vista Street (January-March). The entire project is expected to be completed by spring 2019.

Rumors continue to fly about the proposed Sarasota County/FDOT road swap involving River Road in South County and the roads that traverse the Key. In response to News Leader questions, Zachary Burch, government affairs and communications manager for FDOT, reported in an email that he was able to confirm that the segment of Stickney Point Road west of U.S. 41 — which is included in the proposed deal — was an FDOT recommendation.

In a telephone discussion last week, Burch emphasized what L.K. Nandam, FDOT’s District One secretary, had written county staff in a May 2 letter: The goal was to match miles for miles as much as possible in the swap. Burch added in his email, “We take a number of factors into account when looking for road swap options, including lane miles, maintenance responsibilities, regional significance, and many others. Sarasota [County leaders] did express their unwillingness to take over the Stickney Point Bridge, which was originally part of our offer, and we removed it.”

Further, Burch explained the process to achieve the swap. “[O]nce both the County and State agree on the road transfer limits and terms, [the initiative] includes a legal review by both the County and State [and] the County must pass a resolution supporting the transfer,” he wrote. A public hearing will be conducted, he continued, and a Cultural Resource Assessment Survey [will be undertaken] by the Florida Division of Historical Resources, which assesses if there are any culturally significant areas that need to be preserved and/or that all sides are aware of them prior to the transfer.”

After all of those steps have been completed, Burch pointed out, “both the State and County would sign the agreement to finalize the transfer.”

More money for the trolley 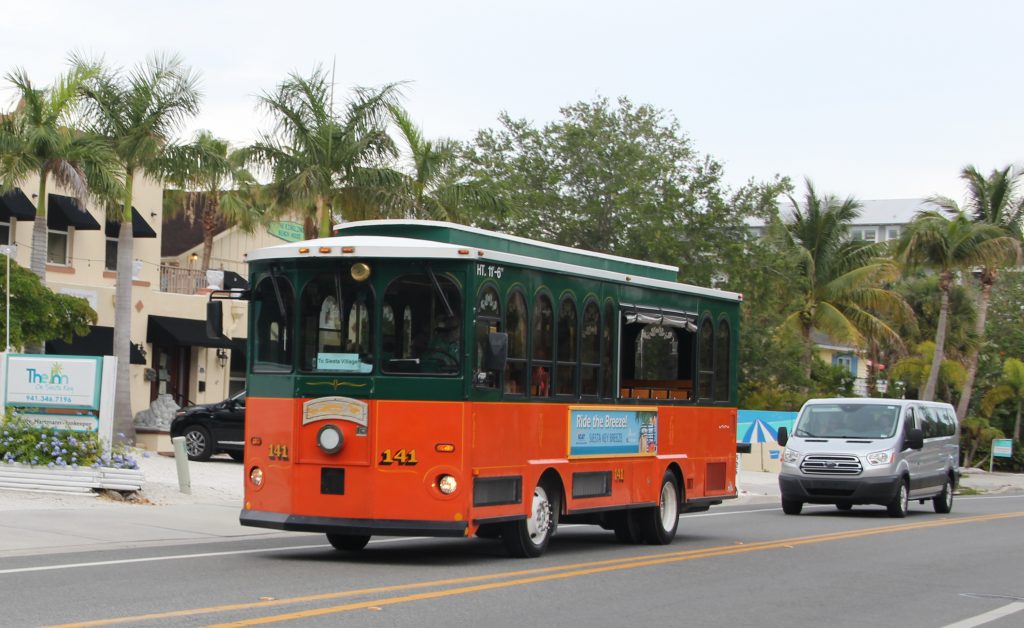 Thanks to a unanimous County Commission vote on May 8, the Florida Department of Transportation (FDOT) will contribute $431,876 to the Siesta Key Breeze open-air trolley through the rest of the state’s current fiscal year, as well as FY19.

Additionally, a staff memo provided to the board says the Breeze in March recorded its highest ridership mark since it began operating in March 2017: 36,195.

Officially, the board last week approved the execution of an agreement with FDOT for Public Transit Block Grant program funding. The action came as part of the vote on the May 8 Consent Agenda of routine business items.

A county staff memo explained that Sarasota County Area Transit (SCAT) began a new Route 10 on Siesta Key in July 2014 with grant funding through an FDOT joint participation agreement. In March 2017, SCAT launched the Breeze, replacing the buses. To continue operating the trolley, the memo continued, the new joint participation agreement was necessary so FDOT financial support could be secured through Dec. 31, 2019.

The total amount covered in the agreement is $863,752 for each of two years, the memo noted. FDOT is covering 25% of the expense of operating the Breeze, the memo explained, while a Federal Transit Administration grant will pay 50% of the expense and the county will pick up the remaining 25% as a match for the federal funds.

As a result of keeping ridership records, the memo pointed out, SCAT has found the peak period is February through April. “The lowest ridership occurred in September and October 2017,” the memo added.

A fact about crosswalks

In working on a variety of crosswalk issues on the island, SKA President Gene Kusekoski has become much more educated about all sorts of facets of those safety measures, as he indicated during the May SKA meeting.

Among his findings, he said, is that state law does not give the right of way to a pedestrian crossing a street unless the pedestrian is in a crosswalk. In fact, Kusekoski pointed out, “You could actually be cited” for impeding the progress of a vehicle.

He was referring to Florida Statute 316.130. Section 10 of that law says, “Every pedestrian crossing a roadway at any point other than within a marked crosswalk or within an unmarked crosswalk at an intersection shall yield the right-of-way to all vehicles upon the roadway.”

Even Commissioner Alan Maio, who represents Siesta, did not know that fact until Kusekoski told him, Kusekoski added.

“So we’re going to use that to try to put some pressure” on local leaders, he said, so they will agree to help the Make Siesta Drive Safer (MSDS) Committee.

MSDS has been working for more than a year, meeting with local law enforcement officers, elected officials and representatives of the Florida Department of Transportation (FDOT) to implement measures on Siesta Drive and Higel Avenue to slow down traffic. One big hope MSDS members have is that, if the route becomes a county road under the terms of a proposed county road swap with FDOT, then the speed limit can be lowered from 40 mph on parts of the segments. At the behest of MSDS, FDOT already has erected signs on Siesta Drive and Higel Avenue to make the speed limit 30 mph through the nearly 90-degree curve where the two roads intersect. The department also has modified electronic signs to warn drivers if they are exceeding 25 mph as they approach the curve, as that is the recommended speed for that intersection.

Getting at least a couple of crosswalks installed is another one of the MSDS goals.

Another issue that arose during the May SKA meeting focused on the waiting time of drivers whenever the two drawbridges to the Key open for boats.

SKA Director Joe Volpe presented statistics for December 2017 and January and February of this year regarding the number of times each bridge went up.

For December, he said, the Stickney Point bridge had 190 openings, while the one on Siesta Drive opened 159 times.

The bridge tenders also reported, Volpe said, that 99% of the time, it took only 5 minutes from when the gates went down to when they went back up, allowing traffic flow to resume.

“Does anyone else believe that one?” he asked. “So we’re continuing working on this.”

Siesta architect Mark Smith, past chair of the Siesta Chamber of Commerce, has timed the gate-to-gate operation as he sat in lines of vehicles at the bridges, and he has found the gate-down-to-gate-up operation to take 5 minutes.

This reporter has sat in lines at the bridges, too, during season. Occasionally, when a sailboat has halted further out in the bay than usual to await the bridge opening, and then maneuvered at slow speed into the Intracoastal Waterway, the waiting time for motorists probably has been a bit more than 5 minutes. This reporter observed such a situation earlier this year.