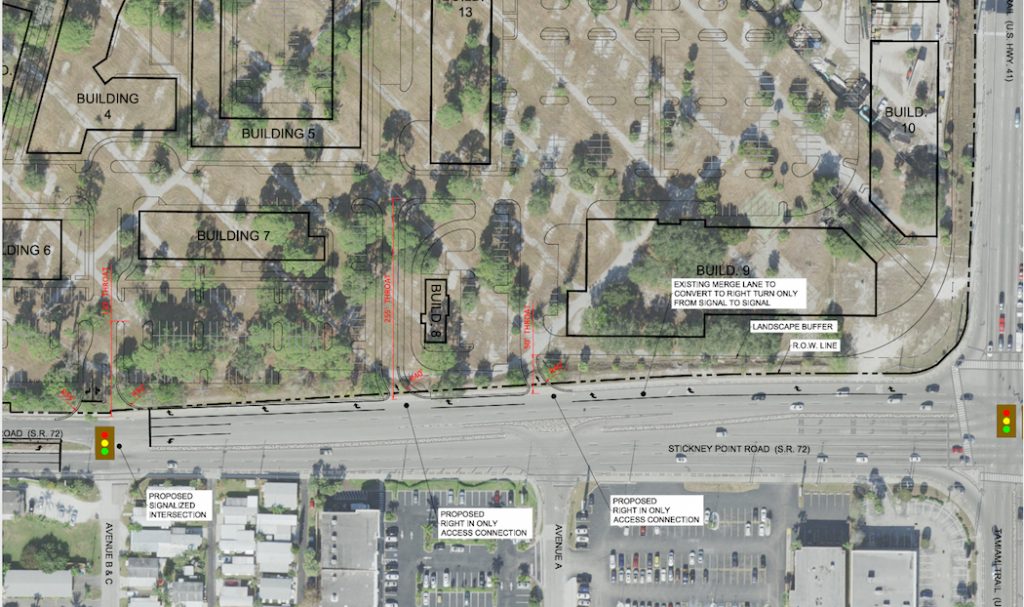 As the Sarasota County Planning Commission and County Commission prepare for public hearings on Siesta Promenade, the potential for the mixed-use development to exacerbate traffic congestion continues to be the primary focus of public consternation.

The County Commission has reserved both its morning and afternoon sessions on Dec. 12 for that hearing. The morning session will begin at 9 a.m., as usual, he noted, so the hearing will start sometime after that hour.

Siesta Promenade has been proposed as a residential/retail/office/hotel project at the northwest corner of U.S. 41 and Stickney Point Road.

A look back at the fiery workshop

Over a three-hour Neighborhood Workshop took place on Aug. 23, many of the approximately 400 attendees expressed exasperation about it to Todd Mathes, the director of development for Benderson Development.

After Todd Dary, manager of the Sarasota County Planning Department, opened the workshop with comments about how people can participate in the upcoming public hearing process on the Siesta Promenade application, the first question a member of the audience asked was, “What do we do to stop this thing?”

“All land use decisions, all land use changes, rest in the power of the County Commission,” Dary said. “The ultimate decision is by the elected officials …”

One woman told Dary, “You’re going to add 400-some houses [to the area]. … What about getting to the hospital? What about fire [and other types of emergences]? This is ridiculous, what you guys are trying to do. What you want to do is outrageous!”

“This is not my project,” Dary replied.

A woman representing the Gulf Gate Community Association expressed concern that “the volume of traffic that this will generate will back up into Gulf Gate Drive.”

Another man told Dary, “I live on Siesta Key. It is 1.3 miles down Stickney Point Road from [U.S.] 41 to my home. Last month, it took me one hour; the [Stickney Point Road] bridge did not go up once. And I don’t understand … how the county or whoever could even think about making [the road] busier.”

More applause rang out in the sanctuary.

A woman asked why staff was holding the Neighborhood Workshop on Aug. 23, “not when everybody is here. Do you know how many part-time residents we have, because it will affect their lives [too]?”

“We cannot hold up petitions when they are ready to go to public hearing,” Dary explained. “We schedule them. That is the policy for all land use changes, petitions, in the county.”

Mathes of Benderson Development, explained that the Siesta Promenade proposal comprises 414 condominiums/apartments, a 130-room hotel that will be 80 feet tall, up to 133,000 square feet of retail space and up to 7,000 square feet of office space.

Access to the site will be provided via three points on Crestwood Avenue, two on Glencoe Avenue and three on Stickney Point Road, Mathes noted.

One recommendation Benderson has for improving traffic flow, Mathes said, is for the Florida Department of Transportation (FDOT) to re-time all the signals on the U.S. 41 corridor. He estimated the number to be between 30 and 50. The department does periodic re-timing, he explained.

FDOT has advised county and Benderson staff that it would not adjust traffic signal timing just to facilitate the flow of vehicles associated with Siesta Promenade, if the project is approved and constructed.

Yet another aspect of the project that has riled residents of Pine Shores Estates — which is adjacent to the Siesta Promenade site — is the prospect of vehicles pouring into the neighborhood to avoid the heavier traffic flow on Stickney Point Road and around that road’s intersection with U.S. 41.

Sura Kochman, a leader of the Pine Shores Neighborhood Alliance, confronted Mathes about that issue.

For four years, Kochman stressed, that was Mathes’ promise, as he and Benderson Development staff worked on the proposal.

The initial application filed with the county did not include access to Siesta Promenade from Glencoe Avenue, Mathes responded, “and we worked at that for quite a while.” Later, he pointed out, consultants and county staff reviewing the plans “all said the neighborhood roads would be … important, so people don’t have to go to [U.S.] 41 to get to the development.”

“You’re twisting it,” Kochman replied. “You’re saying the people from the neighborhood would want access to your development, and that is why you’re making the access points. It’s the reverse. It’s the people leaving your development. They’ll be traipsing up and down Glencoe. … You promised me personally … ‘There won’t be any traffic on Glencoe.’”

“You’re opening up a nightmare for Pine Shores,” she told him, drawing another round of applause.

How is it possible for the public to believe anything he says, Kochman asked Mathes, “because you’ll change it on the fly.”

“We’re not changing it on the fly,” he replied, adding that the county’s Planning Commission could recommend — and the County Commission could agree — to stipulations designed to keep Siesta Promenade traffic out of Pine Shores.

Yet another facet of Siesta Promenade to which people cited objections are the heights of the residential structures, especially the hotel.

When Barbara Jensen asked if the hotel would comprise eight stories, Mathes told her, “It would probably be more like six or seven stories.”

However, he conceded, “It could be [eight stories].”

Mathes also explained that Block 1 of the five blocks proposed on the site plan has been designed with a maximum height of 65 feet for residential structures. Nonetheless, the buildings within 100 feet of the Glencoe Avenue boundary would be a maximum of 40 feet, he said.