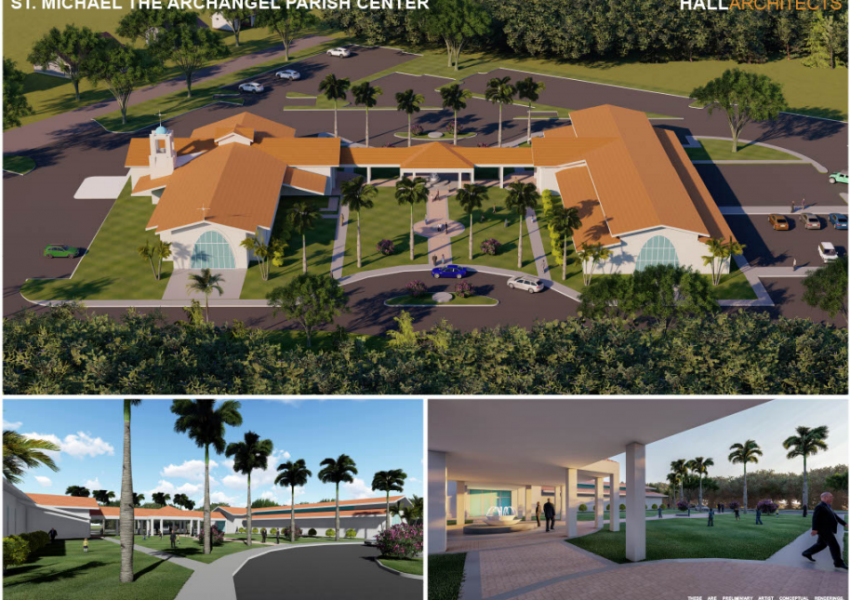 Publishers Note: The parish is seeking help from all residents, businesses and visitors as it takes on this monumental endeavor. No monetary donation is too small with all funds raised staying with the parish for the building project.

The problem began innocently enough in June of 2018.

There was a clogged toilet in the Parish Hall restroom during a Vacation Bible School session at St. Michael the Archangel Catholic Church. By the time the issue was discovered several days later, contaminated water had done extensive damage to the interior of the 44-year-old building.

Almost immediately, the church decided to get a professional evaluation to see what it would take to repair the destruction. The news was not good.

“We sought the expertise of several engineers and architects, who then discovered that the building has foundational, structural and mechanical issues,” said Father Michael Cannon, St. Michael pastor. “We also found out that both the Parish Center and the Parish offices are now below FEMA flood plain levels.”

According to FEMA regulations, when the rehabilitation cost of an existing structure that has sustained substantial damage is estimated to cost more than 50 percent of the value of the building, it’s required that the existing structure be elevated to be compliant with current FEMA code.

In the case of the Parish Hall at St. Michael, the building’s foundation would have to be raised more than two feet before any renovations could even begin. Plus, during the inspections, it was found that there were multiple problematic issues with the building.

“We discovered that there were further problems, like mold from the flooding and termite damage in the attic,” said Jim Holt, St. Michael parishioner and head of the Building Committee. “It was determined that we would need to build a new Parish Center, because we just didn’t think that putting any more money into the existing one would be prudent.”

The proposed project will prove to be an ambitious undertaking. The yet-to-be-named Capital Campaign will run up until 2021, with the goal of funding a 10,000+ square-foot construction project. Included will be not only the new Parish Center, but also a daily chapel, a commercial kitchen and new parish offices.

With the enhanced construction, St. Michael is hoping to better meet the needs of its parishioners and visitors of all ages, by providing them with multiple warm, inviting places where they can gather, pray and socialize.

Holt says that one of the planned areas he’s most looking forward to completing is actually outside the proposed building, in a lovely courtyard.

“It’s meant to be an outdoor working space, and we’re also talking about a water feature, where we will have people send us water from their favorite bodies of water; whether the Jordan River or their favorite local lake and we’ll add it in,” he said. “No matter what faith tradition they are, visitors can come up here from the beach and reflect on their relationship with God. We want to make it a Siesta Key destination spot to help deepen people’s faith.”

Besides the Parish Center building, the larger plan includes also tearing down the Rectory building, which now houses the church’s offices. It was built at the same time as the Parish Center, and was not intended to be office space and also is not compliant with FEMA code.

At the recommendation of the Diocese of Venice, Sarasota architect Greg Hall, of Hall Architects, submitted an artist rendering that includes the new building, as well as the central courtyard and a reworking of the parking lot layout, to allow for more spaces.

In addition to the Capital Campaign donor opportunities which will soon be announced, there will also be areas where donors will be able to memorialize people who are close to them. In the past, the church has sold brick pavers alongside the Chapel, and Holt said he is working on developing a touch-screen program where parishioners and visitors will be able to quickly locate where specific bricks are, based on names, hometowns and other parameters.

Since St. Michael first opened its doors to its founding families back in 1960, it has maintained a steady growth in parishioners, and in the past two years alone, has welcomed more than 300 new members into its fold. During season, that number swells substantially—Holt says that last Easter Sunday weekend, more than 8,000 worshipers attended Mass at the church, and that number didn’t even include the vigil service.

Father Michael said that he realizes that the funds the church needs to raise for the upcoming project will be an ambitious undertaking.

“To reach this goal, we’re asking every parish family and every visitor family to make a gift—a sacrificial gift, if they can,” he said. “This is a once-in-a-generation opportunity to dramatically enhance and secure the mission of our beloved St. Michaels. We are asking everyone to participate in whatever ways are possible for you. But most importantly, we are asking God’s guidance and direction similar to that given to the pioneers of this community 60 years ago.”