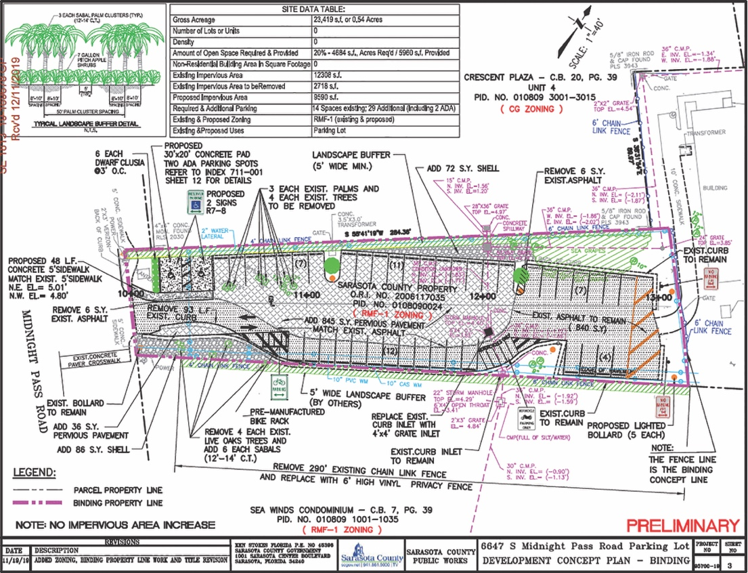 Sarasota County staff’s plans for a public parking lot on the former site of a Sheriff’s Office training building — located at 6647 S. Midnight Pass Road — remain under review, according to the county’s Planning and Development Department’s records.

In late January, a notation on an interactive county map showing the site of each proposed project in the county said no dates had been set yet for the Planning Commission or the County Commission to address the Special Exception petition on which staff has been working since 2018.

A staff document submitted to Planning and Development on Dec. 11, 2019 explained that the Special Exception petition “involves changing the existing land use” of the property by “retrofitting the front parking lot area … to public parking lot use only.”

The facility would be free for public use, the document noted.

The 1.83-acre site fronts on South Midnight Pass Road, the document pointed out. The parking lot would involve “only the western 0.54 acres,” the document added. A structure on the site contains a water tank; it is property of the county’s Public Utilities Department. The document said that a chain link fence, with gate, surrounds the area where that building stands.

During a Sept. 26, 2019 public workshop, county staff explained that the proposed design would add 29 parking spaces to the 14 already on the site; two of the new spaces would meet Americans with Disabilities Act (ADA) requirements. Spaces also would be provided for bicycles and motorcycles.

“Potential users of the facility include the general public, beach visitors, [employees of area businesses and] local commercial patrons,” the December 2019 document said. The hours of use would be unrestricted, it continues; however, it points out that, as with the municipal lot in Siesta Village, no overnight parking of recreational vehicles would be allowed.

During a Sept. 26, 2019 Neighborhood Workshop, the document added, “several neighboring citizens” suggested the parking lot be open only from dawn to dusk, or a similar time frame.

Part of staff’s plan is to add “internal parking signage,” including possible wayfinding signs directing visitors to the two nearest public beach access points — Access 12, which is slightly north of the site, and Access 13, which is south of the property.

Further, staff proposes a pickup/drop-off point for the Siesta Key Breeze trolley “at or near the parking lot entrance.”

Commissioner Alan Maio has suggested that in discussions of the potential uses of the parcel.