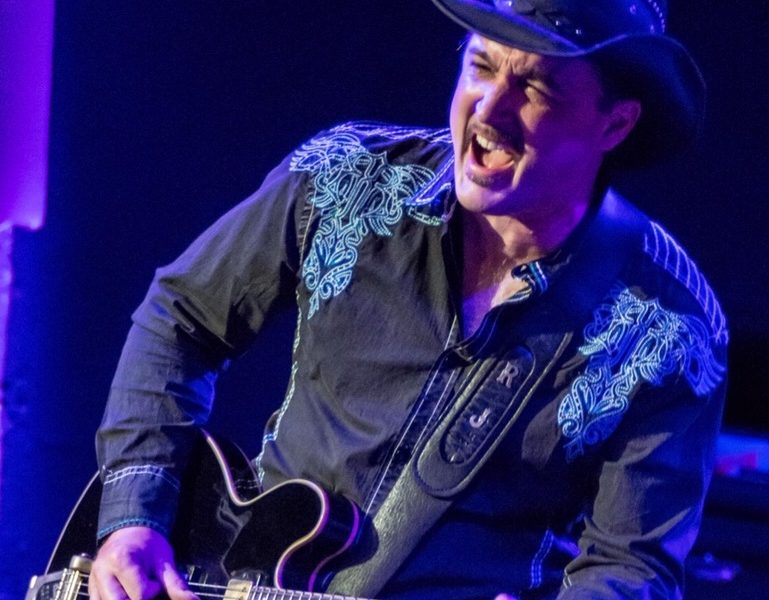 As the son of a military man, bluesman R.J. Howson grew up all over the world. While that lifestyle affects everyone differently, R.J. found it stimulating and educational, exposing him to a wide variety of people, places and musical styles. The family was always somewhat musical, offering the Howson kids a variety of beginner-level instruments from a young age, allowing them to find the ones that spoke to them by experiencing a wide variety. R.J. also had the good fortune to attend a California school that taught students how to read music and encouraged them to all play at once together, somewhat like the Suzuki method but instead of just violins, it was a melding of all different instruments. The first to really catch R.J’s ear was a somewhat unusual choice: the recorder.

“I liked the tone of it,” he explains, “and the single line melody. I found it more appealing than horns … until I was about 12 and started playing sax; I had decided that I wanted to get into the school band.”

Sax was a favorite, but soon after mastering that, R.J. picked up a guitar and thoroughly enjoyed both the emotional and physical sensation of playing a string instrument. It soon topped the favorites list.

“It was something about the feeling of finger picking … I don’t use a pick … and the bending techniques,” R.J. explains. As to any further formal musical education, he feels he “got a PhD in blues by playing on tour with the old bluesmen and at Buddy Guy’s blues club; I’ve even shared a stage with him.”

Settling in Chicago (as a result of a job offer) brought him to a complete change of consciousness. Though the job was excellent by most standards, R.J. had discovered music as his true calling, and living in Chicago furthered his love and knowledge of blues. The city itself was a wealth of music exposure and information, and R.J. came to think of music as a healing art. The combination of his musical talent, his spiritual immersion in sound, and his business acumen were all coming together now and R.J. was learning how to balance those aspects to their best advantage. Just as researchers have, of late, questioned if the old “right brain/left brain” designations of thought process might not be a myth, R.J. says he’s always felt that categorizations were “for librarians and marketers.” He had a long history of what might have been regarded as impressive left brain careers …15 years as a robotics engineer, 10 years working with a human genomes project “on the scope of the Manhattan Project,” … but at the same time always embracing and absorbing more and more feeling and knowledge of music.

What resulted was the realization that while music was his love, it could also be his life if he applied himself both as a player/singer/composer on the art side and a keen businessman who controlled his own exposure and destiny on the music business side. Most music lovers are aware of the music business’s tendency to exploit players and creators who are not protected or knowledgeable on the business side of music. Paul Simon even expressed it lyrically when he sang “… the music suffers while the music business thrives…”

But this is a new day. Thanks to technology, savvy musicians are no longer at the mercy of “the system” and can get their own exposure, audience, creative control, product sales and reward by maintaining control of their own image and intellectual property. This is enormously satisfying for those both talented and educated enough in both the artistic and business sides of the musical coin to have the freedom of complete control. R.J., coming from an unusual mix of both the music and business worlds, has the satisfaction of performing what he wants with whom he wants where and when he wants on his own terms. He’s protected this existence for himself by owning his own record label and publishing company. He’s further built his brand by always billing himself and his bands as “The R.J. Howson Band,” not some currently-cool fad phrase or movement word or expression. Just the soul of his business: Himself. While he may have walked away from the corporate world, he certainly didn’t waste the valuable lessons learned there.

He threw himself into the music world by working on the road with established blues people playing seven to10 gigs a week, occasionally even 10 to 15 … a breakneck pace for anyone. Following this initial energetic burst of determination and enthusiasm, his business sense tapped him on his artistic shoulder to remind him that quality was more important than quantity. It was that common-sense realization that made him pull back and devote himself to play fewer shows of higher quality, allowing him to perform as his best self with his best co-players in a smaller number of shows. At last the balance was established, and it worked.

R.J. recently released a new CD titled Set it Free, available through iTunes, Amazon, and other online outlets or from the artist himself at his live gigs. You can hear some of it, as well as captured live performances, on YouTube listed under (of course) R.J. Howson.

Live gigs coming soon in the Sarasota/Siesta Key area include first-Sunday (March 3)  afternoon favorite at Siesta Key’s famous Blase Cafe in the Village: classic car show starts at noon and the R.J. Howson Band performs from 2 – 5 p.m. You can go to https://artistecard.com/rjhowson for additional band information.