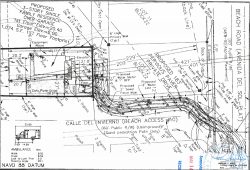 Almost exactly 10 months after he submitted the original application to Sarasota County’s Environmental Permitting Division, the attorney for a Siesta Key property owner has provided new material maintaining his assertion that construction of a three-story house should be allowed fully seaward of the county’s Gulf Beach Setback Line. 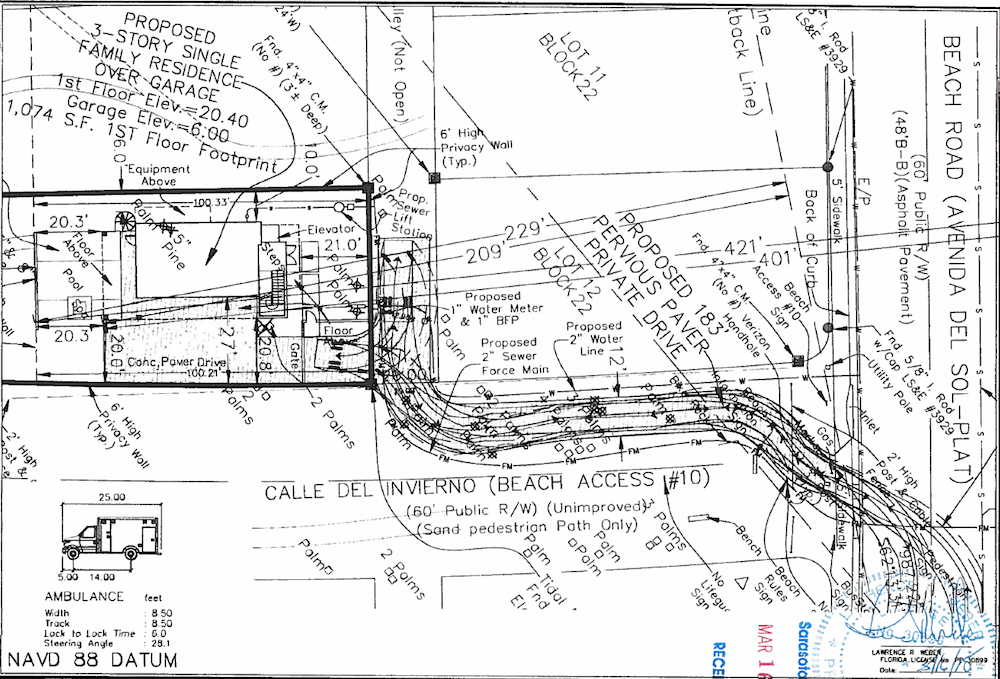 The application also seeks to use Beach Access 10 as the means of reaching the house. That access is the extension of Calle de Invierno west of Beach Road, the attorney, Robert Lincoln of Sarasota, pointed out. It was platted in 1926, and the county never has vacated the portion used for Access 10, Lincoln said in a recent interview.

The delay between the original submission of the application in May 2017 and his providing responses to county staff comments — which he filed on March 16 — was rooted in “a lot of confusion,” Lincoln added during the interview.

“We’ve been trying to work with staff,” he said. “It’s a little bit of a chicken and the egg [situation] with them.”

On Feb. 27, Weiqi Lin, a technical specialist in the county’s Environmental Permitting Division, had provided notice to the Saba Sands II project team that the application submitted on May 18, 2017 would be deactivated if county staff received nothing from the team by March 16.

The manager for Saba Sands II is attorney William A. Saba of Sarasota.

The new material is under Environmental Permitting Division staff review to determine whether it is complete, county Media Relations Officer Drew Winchester said in an interview.

Acting as the agent for the limited liability company, Lincoln acknowledged in his March 16 responses that the land west of the house at 654 Beach Road was purchased in 2012, “about 33 years after the Coastal Setback Code was adopted in 1979,” as county staff had put it.

That code, staff noted, restricts and limits development seaward of the county’s Gulf Beach Setback Line (GBSL). County staff also had pointed out that, in 1999, the County Commission denied a request of the previous owner of the property for a Coastal Setback Variance for construction of a house.

“Furthermore,” staff continued, “[Saba Sands II] should be aware that the [commission] has denied all variance requests for any new residential structures westward of Tenacity Lane in that neighborhood since 1979.

“[T]he Coastal Setback Code does not prohibit a landowner from obtaining a variance [for construction] simply because the property is purchased after the Code was adopted,” Lincoln responded. Citing a 1980 3rd District Court of Appeal decision in Florida, Lincoln made it clear that the “[m]ere purchase of a property subject to a regulation related to standards such as setbacks does not convert a hardship imposed by the regulation into one that is ‘self-created.’”

Additionally, Lincoln pointed out, “A prior denial of a variance does not establish that a later denial is not an undue hardship on the land. … If that were the case, the first denial would eliminate all economic use of the property and constitute a taking.” Lincoln cited a 1992 judicial ruling to support that view.

The total living area of the Saba Sands II house would be 3,496 square feet; a deck would encompass 277 square feet; and a 20-foot-wide paver driveway, privacy fence and related landscaping “would preempt approximately 4,300 [square feet] of viable dune areas and would have significant, permanent, adverse impacts on vegetation, sand dunes and other beach stabilizing features, and on the coastal system,” county staff wrote.

In the Saba Sands II case, Lincoln noted, such a transfer is not possible, because the property is not under common ownership with lands to the east that front Beach Road, nor has it been for at least 50 years.

Continuing opposition to the project

Victoria Ochoa, who manages property on Siesta Key, has urged Siesta Key Association (SKA) members to fight the proposal for the Saba Sands II project. She is among creators of a Facebook page, Save Siesta Key Beach Access 10, designed for that purpose, she announced last fall.

One major reason Siesta Key’s beach is so beautiful, she told SKA members on Oct. 5, 2017, is because of all its marshes. Those areas also are a primary habitat for wildlife, she pointed out.

If Saba Sands II is successful in winning County Commission approval, Ochoa said, that will open the door to even more construction along the Gulf of Mexico, which will reduce the area of the beach.

Original opposition to the plans began last June, led primarily by Sherrill Mills, who has lived for more than 40 years at 560 Beach Road.

In a document she distributed, Mills wrote, “IF SABA SANDS IS GRANTED THESE VARIANCES THE PRECEDENT ESTABLISHED BY THAT ACTION WILL OPEN WIDE AN ENTIRELY NEW ROW OF DEVELOPMENT ON SIESTA BEACH SEAWARD OF THE GULF BEACH SETBACK LINE AND SEAWARD OF ALL EXISTING BUILDINGS!!!”