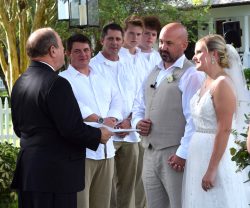 Siesta Key residents, Lauren Richard of Atlanta, Georgia and Justin Estes of Double Springs, Alabama were married during an intimate wedding ceremony at Palmetto Riverside Bed and Breakfast alongside the Manatee River. This fabulous couple were surrounded by family members and great friends as they committed their lives to each other while a classical guitar player gently played love songs on a beautiful Southwest Florida afternoon. 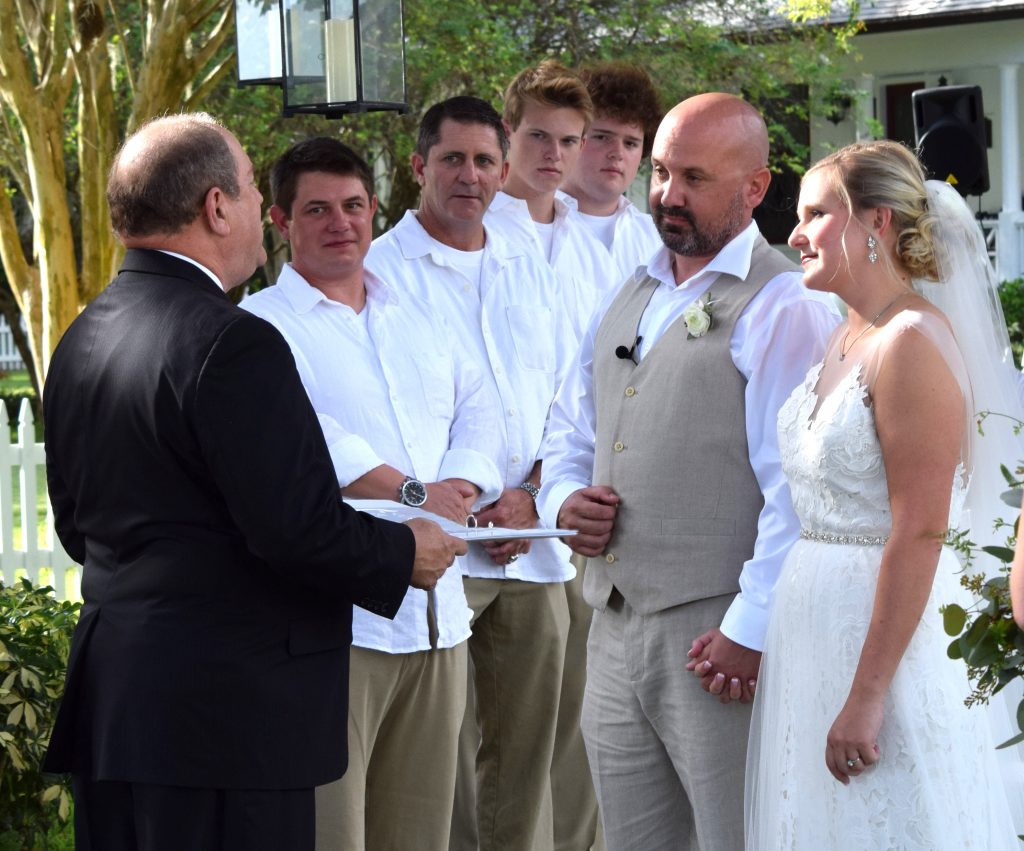 Lauren and Justin worked for athenahealth for two years before ever meeting.

Was it by design, a coincidence, or fate? You decide. A co-worker’s family emergency would change their lives forever. Because of the emergency, Justin was asked to fill-in for Lauren’s coworker at an important healthcare conference. Lauren fondly recalls, “I was the only person directly from athenahealth and honestly terrified with not a lot of experience. I was in no position to show a demo, let alone pitch a sales presentation. And then it happened—in walked my hero of the hour (little did I know he’d be my hero for life) with a warm smile and the humble kind of confidence—like he could own the room if he needed to, but he wasn’t there to steal the show.

My first thought was, I need to be friends with this handsome man. Later that afternoon, I found out that he was more than good looks with a sexy confidence—”he was so genuinely kind and patient.” The two of them really connected and after working together for a few days, Justin asked Lauren if you could take her to dinner the following week. Greeting her at the door with a beautiful bouquet of flowers in hand, they enjoyed a romantic dinner at a quaint restaurant in Roswell, Georgia called Salt a little more than four years ago. Although Justin planned to take them to a few different places that night, they ended up staying at Salt, talking nearly all night.

Even though they inconveniently lived a few hours away from each other they decided after dating just a few weeks they would make their relationship exclusive. A few months later, Justin would verbalize to Lauren the three word phrase that nearly every guy resists, “I love you,“ Justin commented, “I realized she was the one not long after we started dating.”

A weekend trip to Bridal Veil Falls in Asheville, North Carolina will be forever etched in their memories. Justin vividly remembers the trip and the day he popped the question. “She said yes to my proposal three times before she even looked down to see the ring.  We were sitting by a waterfall, and I was waiting for the right moment.  There were way too many people around, and I wanted it to be special.  The moment was finally right, and she said yes, very enthusiastically, three times.  It made me smile, inside and out.” Only their family and close friends can imagine the way they celebrated the rest of the weekend, but all the jubilation didn’t stop in North Carolina. Once they returned home, they continued to celebrate with multiple champagne toasts surrounded by their family.

Lauren was this great couple’s connection to Southwest Florida. She grew up in the Bradenton area and although she left the state at a young age, she never stopped visiting the area regularly. Justin and Lauren’s parents were able to fulfill her dream of being married near the water in beautiful sunny Florida when they discovered the incredible Palmetto Riverside Bed and Breakfast off the Manatee River.
While making several visits to the area to plan the wedding, Justin continually joked about moving to Florida and in the middle of planning their destination wedding, Lauren and Justin discovered a perfect house located on a winding canopy road not far from America’s number one beach on Siesta Key. Six weeks after closing they made the long move from Georgia to the sunshine state.

Lauren has worked as a digital marketing manager at Paymetric, an Atlanta based FinTech business for three years. Justin is a Solution Consultant Senior Manager for athenahealth, an Electronic Medical Record and Practice management company.

This amazing couple spent an incredible seven days in Santorini, Greece on their honeymoon enjoying spectacular sunsets, interesting people and delicious food and wine. It was the kind of honeymoon they will never forget. 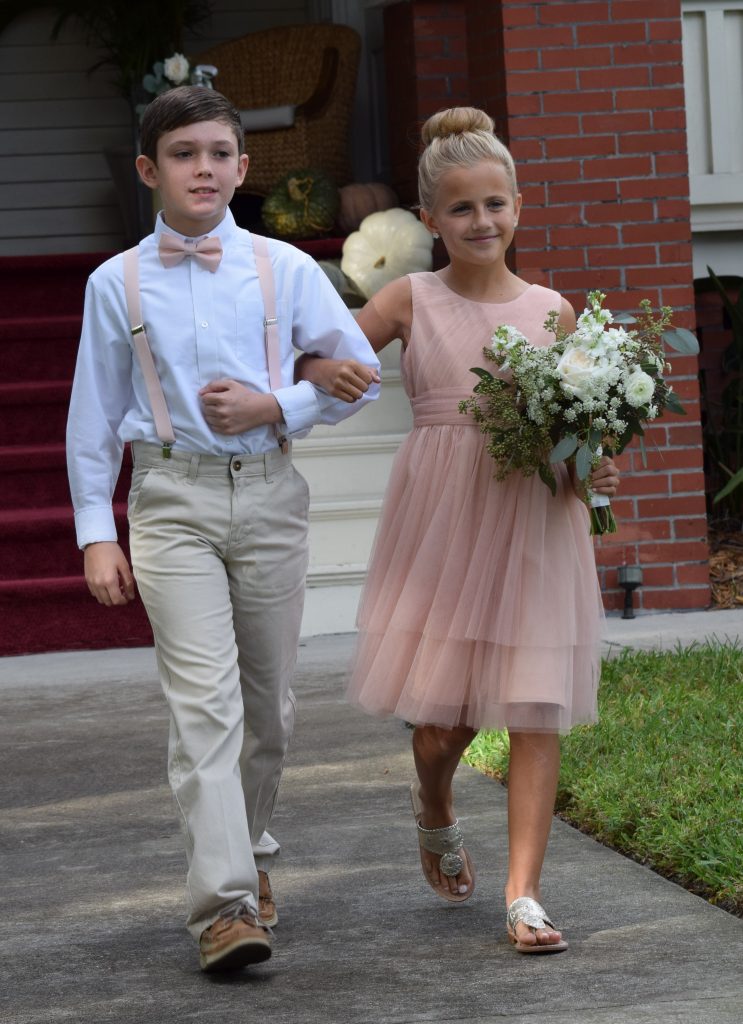 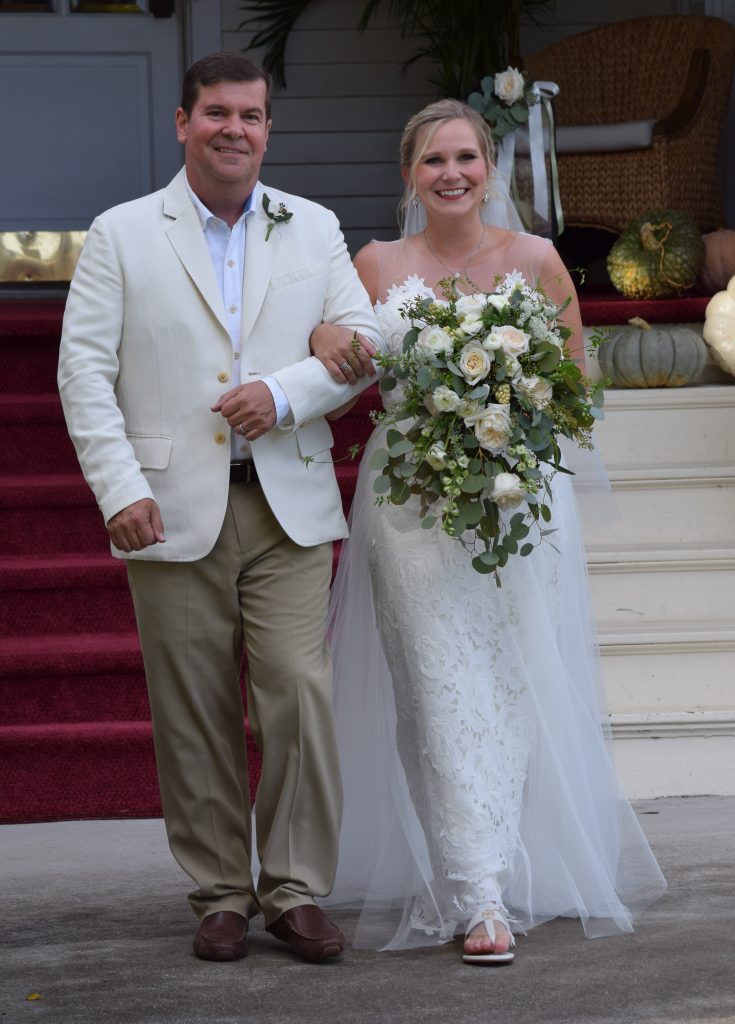