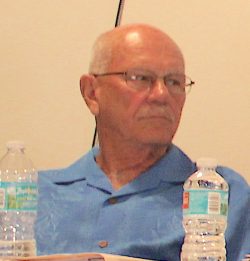 In the wake of the Sarasota County Commission’s 3-2 vote on April 11 to allow an amendment to the Siesta Key Overlay District zoning (SKOD) regulations, the Siesta Key Condominium Council (SKCC) expressed its dismay to its members.

In an April 13 email blast, SKCC President Frank Jurenka wrote that it was obvious that, for the three commissioners who approved the amendment, “the wishes of the voters/property owners took second fiddle to their particular priorities. The crowd at the hearing [and] the presentations and data within the presentations made the wishes of the voters/[owners] crystal clear.”

The vast majority of the 33 speakers — one of whom made his own comments after reading those of a person who could not attend the session — supported keeping the SKOD setbacks for commercial structures as they have been since the SKOD was approved in 2001. Even though a special exception process will be necessary for any applicant who wants a smaller street setback than 25 feet for a new commercial structure, opponents fear the amendment figuratively will open the door to undesirable changes on the Key.

In the email blast, Jurenka also explained a remark that Charles D. Bailey III, the attorney for the petitioners, had made about trying to talk with Jurenka before the hearing. The focus of that comment was an alternative the SKCC had proposed to the SKOD amendment Bailey presented to the commission on Jan. 30. (Bailey officially was representing Clayton and Diane Thompson, owners of Clayton’s Siesta Grille, as the petitioners for the amendment. However, Dr. Gary Kompothecras — in his public remarks on April 11 — made it absolutely clear that Kompothecras’ desire to build a hotel on Old Stickney Point Road was the crux of the drive to amend the SKOD. The April 11 hearing was a continuation of the Jan. 30 hearing.)

Regarding Bailey’s remarks, Jurenka wrote that he felt they were intended as “provide political cover,” indicating that Bailey and Commissioner Alan Maio — who represents Siesta Key — were trying to work out a compromise with the SKCC.

“The problem with this is they called just two days before the meeting,” Jurenka continued in the email blast, and he told Bailey “to talk to Malcolm Lazin,” president of the Gulf & Bay Club, who was the SKCC’s spokesman on the issue. Lazin did not return their phone message, Jurenka added in the email blast, “as he was out of the area.”

Bailey left a voicemail for Lazin, Bailey told the commissioners on April 11, but had not heard back from him.

Jurenka said on April 11 that he declined to talk with Bailey on the phone “because I’m an engineer; I’m not a lawyer.”

During the hearing, Maio brought up the fact that the SKCC board members had “proffered what they thought was a solution” to the setback situation.

The SKCC’s Option B said that in the three commercial zoning districts on the Key, the minimum setback “shall be two feet for buildings or structures not exceeding 35 feet in height. If a special exception is granted in any of those districts for structures or buildings exceeding 35 ft in height, the minimum street yard setback shall be two feet plus one additional foot for every additional foot in height above 35 feet.” Thus, a 36-foot structure would have a minimum setback of 3 feet from the street.

That option added that if a building is taller than 66 feet, the minimum setback should be one-half the height of the structure.

Under county zoning regulations, no building may be taller than 85 feet on any of the barrier islands.

Bailey told the board members on April 11 that Zoning Administrator Donna Thompson had provided him a copy of Option B.

Jurenka also noted in the email blast that the SKCC had proposed the two alternatives to the SKOD amendment three weeks ago, indicating that Bailey had had ample time to approach the organization prior to the April 11 hearing.

In the email blast, Jurenka further pointed out to all the 90 associations that are members of the SKCC that “three events are on the horizon that have a potential impact on this hotel issue.”

First, he wrote, a neighborhood workshop and public hearing before the Planning Commission and the County Commission will have to be conducted after Kompothecras formally submits a proposal for the hotel to county staff.

The other two events, Jurenka noted, are “the Primary Election in August and the General Election in November.”

Maio’s term as the District 4 County Commission representative is up this year. He is running for re-election, and he has one opponent in the Republican primary — Lourdes Ramirez of Siesta Key, who has fought against the SKOD amendment. Two Democrats also have filed for the District 4 seat.

Jurenka added that Kompothecras’ project team members may turn in their petition to county staff soon if they feel the current make-up of the County Commission will be favorable to their plans.

“In closing,” he wrote, “the SKCC mission statement does not allow for political messages but you can be assured that the SKCC will be on the [forefront] for the hearings [after] a project is submitted for vetting. We will certainly … support the position of the Condo voters and owners on the Key.”

During his April 11 statement to the County Commission, Jurenka explained that the SKCC represents 90% of the 100 condo associations on the Key, totaling about 7,000 of the 10,000 units.

One topic that arose during the April 11 public hearing on the SKOD amendment was the potential for the property where Clayton’s Siesta Grille stands on Old Stickney Point Road to be combined with two other parcels Dr. Gary Kompothecras owns on that street, so more space would be available for the hotel without amending the SKOD.

Combining the three parcels “for a bigger piece of land … would be a little closer to qualifying to do what you’re asking to do,” she said.

Kompothecras probably has put more thought into that than he has, Thompson responded.

“I was thinking more about tearing down your restaurant,” Detert told him, and having it recreated inside the hotel.

“That clearly is an option,” Thomson responded, but it was not his desire. Then he turned to Kompothecras in the audience and joked, “Gary, if you’ve got a really big check … come talk to me after the meeting.”

Before she called up the first group of speakers during the April 11 public hearing on the SKOD amendment, County Commission Chair Nancy Detert told the audience that she had 25 cards. It was 2:30 at that time, she added, so that meant two hours’ worth of testimony, as each speaker is allotted 5 minutes.

“So if you want to live long enough to see the vote,” she added, “I would suggest … you be succinct.”

At 4:22 p.m., she said she had four cards left. The board then took a break that lasted about 10 minutes.

When Detert reconvened the hearing, she announced, “I will personally ask you to stop sending up cards …” She had received three more during the break, she noted. “We’ll deal with that, but, you know, I think we’re done accepting any more input, unless you have something extremely startling to say, which I sincerely doubt.”

Later, after rebuttal from Charles D. Bailey III, the attorney for the petitioners, Detert and Commissioner Paul Caragiulo exchanged comments about whether the commissioners should try to write new zoning regulations themselves for the “South Bridge” area of the Key, which encompasses Old Stickney Point Road.

Then Commissioner Michael Moran asked whether Detert ever had closed the public hearing.

“The public hearing is definitely closed,” she replied, eliciting some chuckles among her colleagues and audience members.