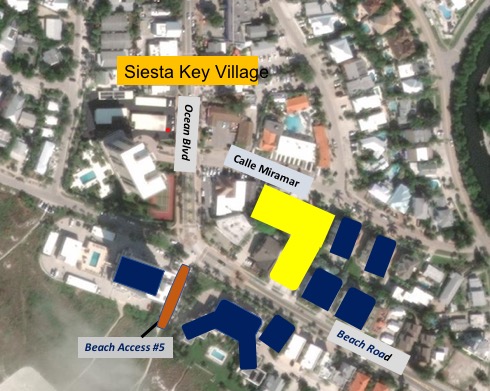 In June, RE/MAX real estate agent Robert T. Anderson Jr. began reaching out to Siesta Key homeowners, asking to show them a presentation about a proposed 170-room hotel that would stand more than 80 feet tall between Beach Road and Calle Miramar.

“It was a fancy presentation with a lot of renderings of the hotel,” said Calle Miramar resident, Mark Spiegel.

His reaction, though, Spiegel added, was shock. Perhaps Anderson took his silence for approval, Spiegel said. Yet, it was not long before Spiegel learned many people shared his reaction.

In August, a Siesta Sand article quoted Anderson as saying “the majority of the feedback [about the project] has been very positive …”

“We were all kind of scratching our heads,” said Siesta Key Association (SKA) President, Catherine Luckner.
People who had seen the presentation began reaching out to each other, Spiegel said. “We found a lot of common ground,” he added, and, indeed, it was not positive.

Siesta Key, Spiegel said, has “a great local flavor.” He talked of the “very delicate balance” between permanent homeownership and seasonal visitors.

Taller commercial buildings with more density, Spiegel said, are “not what attracts people to Siesta Key, and that’s not why we have the No. 1 beach.”

Luckner pointed out that county leaders “really [have] done a good job” of maintaining diverse areas. “We don’t all want to be cookie-cutter beach communities.”

With approximately 220,000 square feet on 0.96 acres, Spiegel added, the hotel would have the highest density per acre on the island of any construction in the past 30 years.

Those reasons — and others — are why a group called the SK Coalition has been organizing to fight the hotel proposal and a related issue involving density on all the barrier islands within the county’s jurisdiction.

Before purchasing a condominium about five years ago in a Calle Miramar complex, Spiegel said, he researched the zoning restrictions. As a developer himself, he added, he knew the potential existed for someone to undertake the transformation of the neighboring land, which was zoned Commercial General (CG) and had single-story office buildings on it. However, he was satisfied that the restrictions for that area, as detailed in the Siesta Key Overlay District (SKOD), would not allow anything too intense. “I learned what was allowed by right,” he pointed out. “Ironically, not hotels.”
For example, Spiegel continued, the maximum height for development in the CG/SCKOD zoning district is 35 feet above the ground-floor elevation specified by the Federal Emergency Management Agency (FEMA). Recent construction plans the Sarasota County Commission has considered have put that first level of construction just above the 18-foot mark.

“I’ve never opposed a development my entire life,” Spiegel added, emphasizing that he would not object to what someone has the right to build.

Steve Blaising, who represents the owners at the 222 Beach Road condominium complex, across Beach Road from the hotel parcels, agreed with Spiegel. “I always assumed that [the site] would be developed.”

Yet, Blaising added, “The magnitude of [the hotel project] is a challenge.”

One other, “deeply concerning” factor, Spiegel told the SNL is the project team’s desire to eliminate the density regulation for accommodations on all the county’s barrier islands.

Attorney Matthew Brockway of the Icard Merrill firm in Sarasota explained in the preliminary application for the project that his clients plan to request an amendment to Future Land Use Policy 2.9.1 in the county’s Comprehensive Plan, as well as an amendment to the county’s Unified Development Code (UDC), which combines all the county’s zoning and land-development regulations.

In the materials he submitted to county staff, Brockway added, “These text amendments will eliminate residential density and residential density calculations for Transient Accommodations, and instead rely on existing height, bulk, setback and other commercial development standards and requirements.”

Diane Erne, vice president of the Siesta Key Condominium Council, pointed out to the SNL that if the County Commission were to get rid of the density requirement for transient accommodations, the Calle Miramar hotel no doubt would be the first of many.

Spiegel referred to that potential as “the slippery slope,” noting “how dangerous those precedents can be.”

About 44 more acres on Siesta have the same CG/SKOD zoning as the hotel site, he said. For one example: Through his research, Spiegel noted, he learned that Louise Khaghan of New York City, owner of the land slated for the hotel, also owns the 27,850-square-foot parcel that is home to Blasé Café. That is across Calle Miramar from the proposed hotel site.

The goal with organizing the coalition now — even before the formal application has been filed with county staff — is to “get ahead of it,” Erne pointed out. The group’s core members are working hard to educate Siesta residents about the multiple facets of the proposal.

“What we aren’t,” Spiegel emphasized, “is a bunch of cranky neighbors that hate development.”

Spiegel has put together his own presentation to highlight coalition members’ concerns.

He emphasizes what he calls the Key’s “death by 1,000 cuts” if the hotel project and Comprehensive Plan amendment ultimately win approval.

“Pretty soon,” he said, “we’re on a path to be a very dense and congested area overall.”

For more information about the group, email SKCoalition@gmail.com. The SKA also has created an SK Coalition page on its website: https://siestakeyassociation.com/projects/sk-coalition/