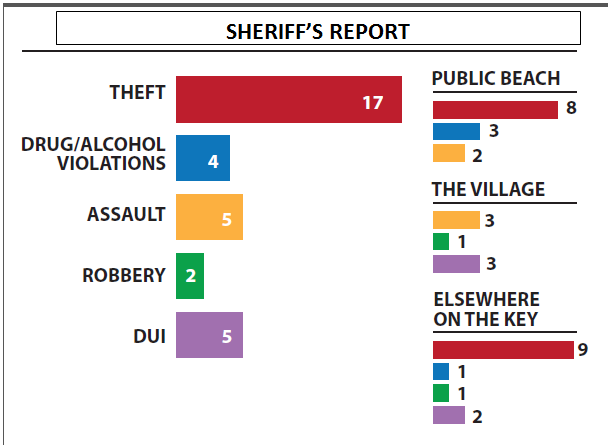 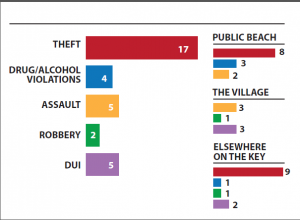 There were a total of 33 crimes committed on the Key from 6/30/13 – 7/22/13
Most notable this month: thefts occurring at the Beach.Beach-goers are reminded to lock their car doors before hitting the sand and to secure their valuables before leaving them unattended on the shore!

OVERVIEW OF SOME OF THE VIOLATIONS:

CRIMINAL OF THE MONTH: Man Robs Store After Applying For Job (7/11/2013)
One Florida job applicant found a bold new way to stand out from the competition.  Police say Anthony Thomas, 33, filled out a job application at a gas station in Ocala, Fla., immediately before robbing the place, CF News 13 reported. Apparently he was very thorough in the application, though, because police were able to use the details he provided to track him down after the robbery. Thomas filled out the form at around 10 a.m. Tuesday, and shortly thereafter, he allegedly reached into the cash drawer and grabbed about $130, according to the Ocala Star Banner. Investigators say the theft was caught on surveillance video. Police say Thomas tried to fight them off, but failed, WFTV reported. They added he told them, "I didn't rob no store." No word on whether he got the job.(Story courtesy of Huffington Post –Weird News)