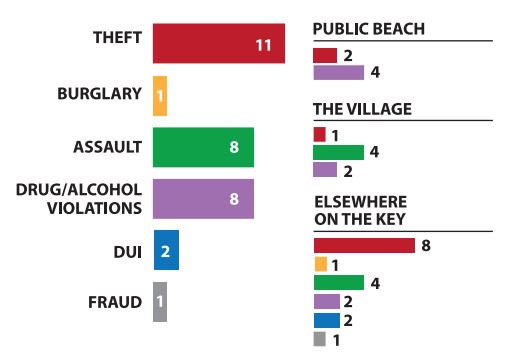 A deputy responded to a report of an unknown person removing four metal posts from the asphalt at Beach Access 2. The posts each had one square reflective sign attached. Estimated value of each post and sign was $100. The holes where the posts were attached were filled with sand. No video surveillance of the area was discovered. The complainant later called to say that the posts were removed by an employee, and that they were not stolen.

A 17-year-old girl was arrested for possession at the public beach. A deputy on night shift patrol noticed the girl carrying a Crown Royal bag that appeared to contain a glass bottle with a Crown Royal logo on the top. Due to County Ordinance 90-33(a)(1) which prohibits “Holding, drinking from, possessing, or disposing of glass containers of any kind “on the beach, the girl was approached by the deputy. When advised to walk away from the crowd with the deputy, she became verbally defensive and uncooperative. The deputy removed the half empty bottle from the bag which also contained two plastic bags containing marijuana. Additionally, the defendant possessed two marijuana blunts protruding from her waistband. An attempt was made to issue a juvenile civil citation regarding the incident, but the girl continued a pattern of disrespectful behavior and gave inconsistent information when asked about her age. She was placed under arrest and taken to the Juvenile assessment facility at the County Jail.

A deputy radioed for backup at a Village bar in reference to a fight. A deputy arrived and found the deputy on the ground with a male who seemed to be calm at the time. The deputy told the subject to turn onto his stomach. The responding officer grabbed the subject’s arm and placed it behind his back to be handcuffed. He was then escorted outside. Upon further investigation it was determined that the subject had punched another man on the club floor. The victim signed a waiver of prosecution and the subject is not allowed back at the club.

A man came into the Sheriff’s office to turn in a completed identity theft affidavit. He reported that on or around 3/31/19, an unknown suspect exploited his name, date of birth and social security number in order to receive Comcast services in Louisiana. The complainant was alerted to the crime after being notified by LifeLock. The Comcast account currently has a balance of approximately $791.

An officer was on patrol in reference to the large group of juveniles that gather on the beach. He observed the group separate and witnessed the defendant pick up a vape pen from the sand and someone yell,” Oh he got it! “The officer made contact with the defendant and asked him what was in the pen he picked up, due to his knowledge that the pens are used to smoke THC” wax/dab. He initially stated the vape pen was not his and that he wasn’t sure what was inside it. When asked his age the defendant said 18 and gave his identification which advised “Under 18 until 5/23/19”. When asked again the defendant admitted he was 17 and admitted to having a dab pen in his bag although, he said, the one he dropped was not his. Located in his backpack was a vape pen which contained a thick, green substance. A marijuana field test confirmed a positive result. The defendant was cooperative and his father was contacted to take custody of the defendant. The defendant and his family advised they would be interested in a diversion program.

A woman reported the theft of her rental bike. She had rented two bikes and left them unattended/unlocked at a bike rack on Midnight Pass Rd.

One of the bikes was recovered at a nearby construction site and returned to the business. The other bike was still missing. The missing bike was a teal Sun beach cruiser with a bike basket, valued at $450.

A man reported approximately nine days prior he noticed various items missing from his residence. He stated there was a delay in reporting the crime because he had been feeling ill. The victim was able to provide limited information and reported he believed he knew the suspect due to the lack of forced entry. The victim advised the suspect had recently moved out of the residence. The items missing included a gold ring ($150), computer ($540), Gold watch ($300), 4 boxes of fentanyl pads ($100), and one bottle of prescription medication ($100).