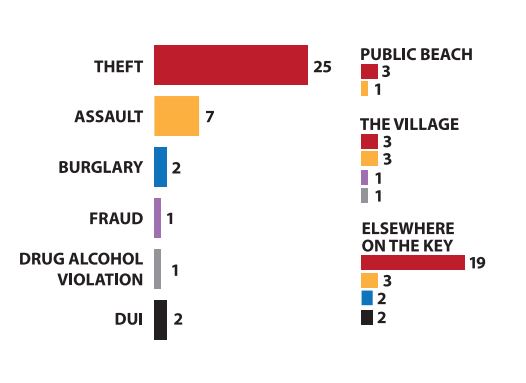 A burglary was recorded on a residential security system. At approximately 2:47 a.m., a vehicle was seen driving down the short, dead-end road, turning the headlights off shortly after passing the victim's residence. A suspect is seen walking up the victim’s driveway. The longhaired female disappears for 3 minutes into what is assumed to be the garage and emerges with a large bag, which presumably contains the victim’s missing snorkel gear ($600). She is then seen entering the victim’s car where she took a pair of ear buds ($40), and rummaged through the center console. At the time of the burglary, the garage door was left open and vehicles were unlocked. According to the victim, nothing else appeared to be missing. The vehicle was processed for DNA.

Deputies responded to an alleged battery. A man stated he was sitting at the bar with his fiancé when another man walked in holding the dog that they had left in their car. The man explained that he had left the dog with the windows down and the sunroof open. According to the complainant, a verbal altercation took place and ended with the suspect grabbing him by the throat and throwing him to the ground. The deputy did not see any marks or indications of injury on the victim and he refused medical treatment. According to an employee, a patron had asked her for a cup of water to give to a dog that had been left in a car. When he opened the door to the vehicle, the dog jumped out. At that time, the man picked up the dog and brought it inside to ask whom it belonged to. She stated that she saw the complainant spit in the patron’s face at which time the patron grabbed him by the neck and pulled him down. The complainant explained that he had been yelling and might have unintentionally spit in the man’s face. He and his fiancé were enraged that someone would think their dog was in harms way and would remove him from their car. The victim did not wish to press charges and signed a waiver of prosecution.

A Village restaurant employee reported a couple had walked out on their bar tab. He stated he attempted to follow them but lost sight of them at Canal Rd. and Ocean Blvd. A search of the area yielded negative results. The complainant stated they ordered 7 Long Island Iced Teas and did not pay for them, totaling $56. The complainant called back on 7/26 and stated he was able to identify the subjects. A deputy made contact via phone with the woman who claimed she was unaware that she had left the open tab and agreed to pay it in full.

A man reported a couple he had invited to share a condo rental with had stolen some of his belongings. He advised that the couple was fighting and he asked them to leave. They left; taking a golf cart that was rented. The next morning the cart was recovered, abandoned in the 6600 Block of Midnight Pass Rd. The man later discovered that the couple had also taken his laptop, shoes and a clothing bag. He received a text message from the couple stating that they were on their way back to Tennessee and had his belongings. They said they would return them when the complainant paid them back the money from the condo rental. The complainant advised he did not wish to press charges but would talk to the suspects when he returned home. A waiver of prosecution was signed.

A woman reported her car was burglarized while it was parked in her driveway. The car had been left unlocked. An unknown person removed the items that were in the rear of the vehicle. The items were recently purchased and were still packaged. There were no witnesses. The items stolen include a personal air conditioner ($64), pet water fountain ($19.99), and an inflatable bed ($240).

The victim of a theft called to update information on his original report. He had found the serial number for his revolver, which had been reported stolen earlier in the week. The Ruger .357, 6-shot revolver had been stolen from his house. It was valued at $650.

An officer met with a man who said his vehicle was taken from the parking lot. He said he was loading his car in a parking space located in front of the playground. He explained that he had kept the car running in order to cool it down for his kids who would be riding in the vehicle. He saw two possible suspects nearby the vehicle; a short time later he noticed the car was gone. His cell phone ($100) his wallet, drivers license and a bankcard were in the car. The car was a 2007 Maroon Chevy Impala with Star Wars stickers on the rear window. There were no available witnesses and no cameras nearby. Deputies canvassed the Key and were posted at both the island bridges. Deputies were in place within 10 minutes from the time of occurrence and posted there for one hour with negative results. A BOLO was issued.

A man reported his Glock-17 handgun was stolen from his vehicle. The last time he had seen the gun was on 8/1/17. He frequently travels to Tampa, but explained that his car is parked in a private garage while he is traveling. The gun was stored in a black paddle-style holster, with a loaded magazine. Both items had been stored in the center console of his Ford Raptor. No signs of forced entry were observed and the vehicle was likely unlocked, according to the victim. Due to the delay in reporting and an unknown time frame, the vehicle had no forensic value.