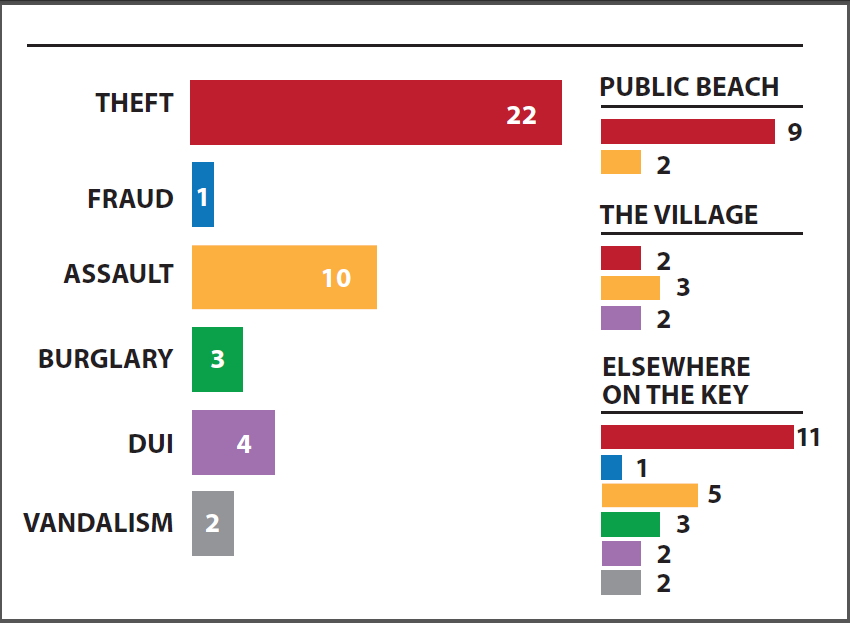 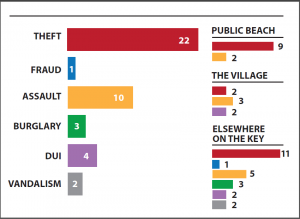 There were a total of 42 crimes reported on the Key during the period from July 25, 2013 through August 23,2013.  Below is an overview of some of the violations.

7/25  Theft/ Misdemeanor   Siesta Beach
A bicycle was stolen from the public beach. The owner stated that it had been next to her parked vehicle in the lot.

7/31  Theft/ Misdemeanor   Siesta Beach
A wallet containing a driver’s license and other cards was stolen when it was left unattended at the public beach.

8/9  Theft/ Misdemeanor   5000 Block Ocean Blvd.
A woman reported that she had left her wallet in the bathroom of a village bar. When she returned for it, it was gone.

8/10  Grand Theft/ Felony   Siesta Beach
A Movado watch was stolen out of a beach bag after a woman left her bag on a towel to go into the water.

8/11  Theft/ Misdemeanor   Siesta Beach
Two teenagers reported their backpack stolen from the beach while they were at the drum circle. They had walked away from it for a few minutes and found it missing when they returned.

8/12  Burglary/ Felony  6500 Block Midnight Pass
An unknown person unlawfully entered an unlocked condominium and removed two laptops, some cash, and a pair of sunglasses. It appears that the suspect accessed the unit by entering the secured pool area, which enabled him to climb up a staircase and enter the unit through the unlocked sliding glass doors. The entire condominium complex has video surveillance.  The manager was contacted regarding obtaining video.

8/13  Assault/ Misdemeanor   Siesta Beach
A man did not wish to press charges against a teenager who attacked him with closed fists. The teenager was not happy with his sister’s choice of friends, as he felt the man was too old to be hanging out with his underage sister. The teenager attacked the man at the beach pavilion after they had walked up to use the restrooms. The man defended himself by blocking the blows, as he did not want to fight with a juvenile. The man stated that he had been invited to the beach by the boy’s sister and was only there to hang out and nothing further. He also stated that he did not wish to press battery charges against the teenager.

8/15   Burglary/ Felony  Sandy Hook Rd.
A victim reported a bike and a tackle box stolen from the garage of his residence. The incident occurred while the victim was home. A screen had been cut on the door that leads to the garage. The suspect was then able to reach through the window to unlock the door from the inside. The bike was later found with a flat tire down the street from the victim’s house.

8/20 Grand Theft/ Felony   5200 Block Ocean Blvd.
The owner of a gift shop in the Village reported several items stolen from the store. Two suspicious women had been shopping in the store on the day the thefts occurred. They had been in the store twice and each had bought items separately with credit cards. According to the owner, both of the women had appeared nervous while in the store. At one point, one of the women was found to be loading two large wooden carvings into the trunk of her car. When questioned, the woman claimed she had planned to buy them although she had never mentioned that to the owner.  The woman eventually paid $500 in cash for the carvings and left.  The next morning, the women returned to the store and asked for a refund, claiming that the carvings were damaged. They were informed of the store’s no refund policy and offered store credit. The woman left the carving at the store and said she would be back later that evening to deal with the return. The owner was advised to contact the sheriff’s office when the women return.

8/20 Grand Theft/ Felony   6500 Block Midnight Pass
The Manager of a gift shop on the south end of the key reported several items stolen from the store. She believes the thefts took place sometime between 8/17 and 8/19 while employees of the business were distracted while helping other customers.

8/20  Burglary/ Felony  Island Circle
A man reported two paddleboards stolen from a boat. The boat was on a lift over the canal. There was no forced entry. It is not known if the subjects came by water or land.

8/23   Burglary/Felony   900 Block Midnight Pass Rd
An NSP paddleboard was reported stolen from a fenced maintenance area attached to an office building. The fence was kept locked at night but not during normal business hours.

Crime of the Month

James Patrick Andrews allegedly robbed a bank after he discovered there was no money in his account.

Almost everyone has had a negative bank balance, but it's doubtful most people would react the way James Patrick Andrews did when he discovered he was out of dough.

Andrews, 43, was arrested Friday for allegedly robbing a Bank of America in St. Petersburg, Fla., after he tried to withdraw money from an ATM machine and saw that there was none in his account.

Andrews then approached a teller to ask why the account was empty. He allegedly slipped her a note demanding $1,000, and told her not to walk away from her window or press any alarm button, or people in the lobby would be hurt.

Although police said no weapon was implied or seen, the teller gave Andrews an undisclosed amount of money, after which he left the building, according to the Tampa Tribune.

Officers then tracked Andrews to a gas station, where he was arrested and charged with strong-arm robbery, and possession of crack cocaine and drug paraphernalia.

Police said Andrews admitted committing the robbery and told investigators he needed the money to pay a drug debt, according to Bay News 9.