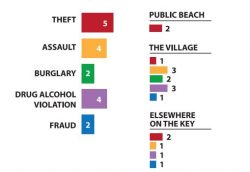 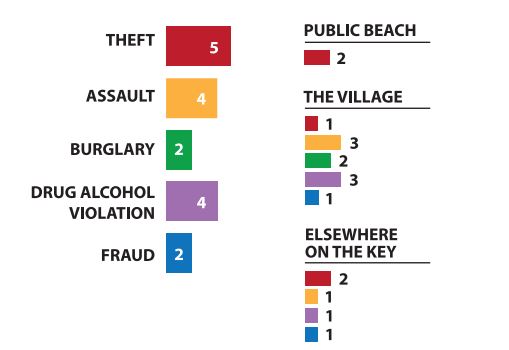 A man was riding his skim board on the beach near Access 2. He eventually left the area and forgot his board on the beach. When he returned approximately 30 minutes later, it was gone. He did not see anyone in the area who could have taken it. The board was described as a “Zapp, Pufferfish”board with orange on the top and orange and black tiger stripes on the bottom. It was only one day old and valued at $600.

A man reported 2 unknown males approached him near a Village bar and battered him.  He was intoxicated and disorientated and was unsure of the exact location of the battery. The victim explained that he was out with friends drinking while visiting Sarasota for a Frisbee tournament.  He did not know why he was attacked, nor did he know the suspects. He sustained scrapes along his shoulder, cheek and side. He also appeared to have injured his shoulder. After the battery, the victim realized he had lost his phone and was unable to call for help or get directions to locate his hotel. A passerby eventually helped him.

A man was arrested for breaking into a Village restaurant and stealing approximately $150 in dollar bills. The suspect entered by ripping open a deadbolt locked door on the patio. This caused the doorframe to break off and fall to the ground. The suspect entered the business and stole the patron signed dollar bills that decorated the walls and ceiling. Video was obtained of the suspect in action and a deputy identified him. He was later located at the Bealls Outlet in Gulf Gate with numerous dollar bills from the burglary still in his pockets. The bills were identifiable by the signatures on them.

Three televisions were stolen from three separate units of a Village motel. The units were not locked due to them being under construction.  For this reason the security cameras had been disabled. The approximate value of the televisions was $1169.

Deputies responded to a Village bar after two men caused a disturbance. Employees of the establishment held down the subjects who had originally been removed without incident. The subjects returned shortly thereafter and when security attempted to remove them, both punched the employee multiple times. The employees subsequently held down the men until deputies arrived. The defendants were both secured and placed into the back of the patrol car. One of the men was extremely intoxicated and was not taken to jail. The other man was also accused by an employee of a ride service of punching the window of the golf cart she was driving. The driver positively identified him and cracks were observed on the rear window of the golf cart, causing approximately $200 in damages. Based on these offenses the second suspect was transported to jail. Both men are not allowed to return to the establishment.

A Village bar employee reported a fight had occurred inside the establishment. An unknown suspect had battered another patron. A witness who was dancing with the suspect at the time of the altercation said the victim approached them through the crowd and bumped into the suspect. She explained a verbal altercation took place and the unknown suspect pushed the victim to get him away. According to the woman, the victim then appeared to attempt to hit the suspect who hit back at that time. Video surveillance showed the same scenario. The victim was contacted at the hospital where he explained he had bumped into the subject but didn’t remember arguing with the subject or moving his arms aggressively towards him. He could not remember anything after being hit. The victim’s wife stated they were walking through the club and did nothing wrong. The victim sustained a large abrasion on one eye and a laceration on the other. He was highly intoxicated and could not remember much before being hit. His wife was also highly intoxicated and became upset during the interview.

A man pulled over for a passing violation was cited for possession of marijuana. After attempting to elude the deputy, the defendant was stopped and a colorful glass pipe was seen in plain view in the center console. The deputy also found a bag of marijuana, a grinder and several empty baggies and jars.

A woman reported she had left her bag by the north side concession area and was unable to locate it a short time later. The bag was described as a black leather fanny pack ($10). The pack contained a UK drivers license, ($10), a pair of glasses ($30). $343 in cash, and a set of UK train tickets ($10). No one had turned in any items to the lifeguards or concession stand.