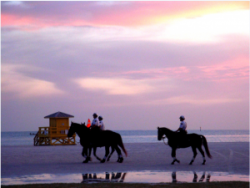 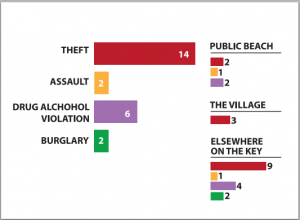 9/20/15 Burglary –Vehicle / Public Beach
A man who left a drawstring bag unattended while he exercised on the beach had the bag taken as well as his car burglarized. The bag containing a t-shirt, ball cap, a bottle of puppy shampoo and his car keys were stolen from in front of the yellow lifeguard stand. The unknown suspect apparently used the victim’s key fob to locate the vehicle in the parking lot. He then unlocked the car and stole the man’s hip pack that was located under the front seat. The hip pack contained his wallet, checkbook, credit cards, driver’s license and social security card. Nothing else in the car appeared to have been tampered with. The man had hidden a spare key on the outside of the vehicle and was able to drive the car home.

9/21/15 Burglary- Vehicle / 5000 Block Tremont Place
An employee of the Siesta Key Utility reported a burglary. Three fishing rods, worth approximately $750, had been stolen from the open bed of his truck while it was parked at the Utility. There are no suspects.

9/24/15 Burglary- Residence / 5000 Block Midnight Pass Rd
The superintendent of a construction company that is completely renovating an unoccupied condo reported that an unknown person entered the unit and maliciously damaged and cut several electrical wires, drain pipes, shower pan, and air conditioning duct lines. The damage is estimated at approximately $2000. A pair of pliers that was possibly used to commit the damage was left inside the unit. The unit was on a lockbox. As there were no signs of forced entry, it is assumed that the suspect knew the access code. The scene was processed for fingerprints.

9/29/15 Burglary – Business / 100 Block Avenida Messina
The Sheriff’s Office was contacted after a man allegedly made statements to other transient subjects in the area of the Village that he had stolen alcohol from a Village bar while wearing a Wal-Mart bag over his head. The bar was contacted to inquire about a possible theft. The staff confirmed that they did have some beer missing from the taps of the outside bar area. This was based on the fact that when they turned the taps back on that morning, they had to purge some of the lines, which happens if the taps are used when they are turned off. They estimated about $50 in beer was gone. Attempts to locate the suspect in the area or in the SCAT Depot in the Gulf Gate area were unsuccessful. The suspect had been seen on the Key frequently over the last few days, but has since disappeared from the area. Management will be viewing the security cameras for evidence.

10/1/15 Burglary- Vehicle / 60 Block Avenida Veniccia
A man reported his wallet stolen from inside his car. He said he thought he had locked the vehicle, but there were no signs of forced entry.  The wallet contained multiple credit cards, a driver’s license, a debit card and $120 in cash. The victim cancelled all of his credit cards and said there appeared to be no fraudulent activity on his accounts.

10/7/15 Burglary- Vehicle / 5000 Block Ocean Blvd.
An officer was dispatched to a Village restaurant in reference to a vehicle burglary. A musician who was playing music at the restaurant for the night finished his set and started to load his equipment into his vehicle. He first loaded his guitar into the car and went back inside to get more items. He left the car unlocked for approximately 15 minutes, returned to the car and headed home. He noticed the guitar missing after arriving home to unload. The victim immediately returned to the restaurant and reported the incident. The officer was able to view the security footage from where the car had been parked. An unidentified male is seen in the video removing an object from the car and leaving. However, due to the poor quality of the video, the man’s race or clothing type could not be identified. There were no witnesses. The items taken consisted of a gold colored acoustic- electric guitar, guitar case and iPad.

10/17/15 Stolen Vehicle / 5000 Block Siesta Estates Court
A man came out of the house where he was staying with friends and discovered his rental car was missing from the driveway. He had last seen the car on the previous night. The house is located in a gated community and the house is located at the end of a cul-de-sac. According to the complainant, the vehicle was locked and the key fob was inside the house on the counter. No evidence was present to suggest the residence had been burglarized. The complainant could not think of anyone who would have taken the vehicle and his friends had no additional information.

10/18/15 Burglary- Vehicle / 1200 Block Old Stickney Pt. Rd
A patron of a south siesta restaurant parked his car in the parking lot around lunchtime. The car was not locked and the windows were rolled about halfway down. Upon returning to the car approximately four hours later, he saw that his newly filled prescription medication, contained in a paper pharmacy bag, had been stolen from the front passenger seat. It is believed that the unknown suspect reached inside the vehicle and stole the medications.