Historic April has been a month of vintage airplanes, fall-over trains, and the roar of car engines along the fledgling Tamami Trail.April was definitely a planes, trains, and automobiles month for Sarasota.

If you pictured a devil-may-care young aviation pioneer, a pioneer of the flying machine who created the first commercial airline in the world between St. Petersburg and Tampa with a branch to Sarasota, a ladies man with impeccable manners and dark good looks, you’re looking at a picture of Tony Jannus.

Jannus, born Antony Habersack Jannus in Washington, D.C., was of American, British, and Hungarian descent. He arrived at age 25 in Tampa Bay, a principal stockholder of Benoist Aircraft Co. in St. Louis.

His history seemed larger than life. According to TampaPix, “He had gained fame in exhibition flying, long distance flying planes and airb

oats, testing military planes and weapons, as well as piloting the first flight for a parachute jump, all by 1913. By virtue of his technical education, he was involved in the experimental and design aspects of aviation and became one of the foremost designers of aircraft.”

Tony and brother Roger, his mechanic, arrived in St. Petersburg in 1913 with a goal of piloting Thomas Benoist’s “Flying Boat” No. 43 as a commercial passenger airline service, the “St. Petersburg-Tampa Airboat Line.” It was the world’s first scheduled passenger airline service using heavier-than-air planes, running between the yacht basin in St. Pete and the Hillsborough River in Downtown Tampa.

The airline expanded its flight plan to include Bradenton and Sarasota in April. Jannus and a passenger flew from Bradenton to Sarasota

on April 9, flying along the Manatee River and then Sarasota Bay to Sarasota in 27 minutes. According to former Sarasota archivist Mark D. Smith with the Sarasota County History Center, “During the long weekend he spent in Sarasota, Jannus entertained the crowds with exhibition flights and offered rides to adventuresome passengers for $15.”

Apparently the first Sarasota airplane ride was made by developer/landowner/entrepreneur Owen Burns. Mrs. I.R. Burns was the first woman passenger.

Speaking of women, Jannus had quite the way with the ladies. According to TampaPix, “His personality, good looks, and talent as a speaker made him a highly desired individual; he often dated movie actresses, and women idolized him, having become the epitome of the romantic flyer. Jannus became the bay area's most well-known celebrity. At age 25, he was a bachelor in demand; not wealthy, but well-off financially. He was handsome, with dark, brooding good looks and twinkling eyes. He was certainly capable of turning feminine heads. The whole crew of the St. Pete-Tampa Airboat line, especially Tony, was treated royally in the bay area, especially in St. Pete.”

The St. Petersburg-Tampa Airboat Line eventually carried 1,205 passengers without injury and with only two forced landings.

Business leaders from Sarasota and Manatee Counties began to create what is now the Sarasota-Bradenton International Airport in 1939 on 630 acres on the county line. Work was completed, at a cost of $1 million, in 1942, and the airport leased to the Army Air Corps until 1947. Improvements, more land acquisition, commercial flights, international flights and more enhancements continued and still are taking place today.

On April 12, 1890, Col. John Hamilton Gillespie was named president of the Manatee and Sarasota Railway and Drainage Co. “

"Sarasota's earliest rail line was built in 1892 and nicknamed the ‘Slow and Wobbly,’” according to Lorrie Muldowney with the Sarasota County History Center.

“The Slow and Wobbly was a financial failure even though it could cut two hours off the three-hour wagon trip over sandy roads between Sarasota and Bradenton,” she continued. “Its susceptibility to overturn, an irregular schedule and unpleasant conditions kept away all but the most adventurous.  ”

Muldowney writes, “Less than three years after the Slow and Wobbly arrived in Sarasota, the tracks were pulled up and sold to help overcome some of the venture's debts. It would be more than 10 years until Sarasota had a successful railroad.

“It was 1903 when the United States and West Indies Railroad and Steamship Company, later absorbed by the Seaboard Air Line Railway, brought its first train into Sarasota. The wood-burning engine pulled a day coach, Pullman and baggage car. The first station, built in a pine thicket on what is now First Street, served both passengers and freight. A separate passenger station was built along 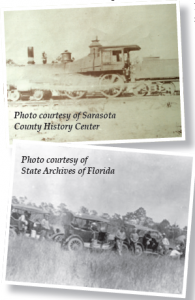 “The Atlantic Coast Line railroad was the second successful railroad to lay tracks into Sarasota. The $100,000 passenger station at the eastern end of Main Street opened in October 1925.

“Demand for passenger and freight rail service diminished after World War II. The SAL and ACL merged in 1967 to form the Seaboard Coastline Railroad, and the last passenger train left the depot four years later. The depot later became a restaurant, Brewmaster’s Steakhouse, but was finally demolished in January 1986.”

You could get there from here in Florida around 1900, but steamer or mule was about the only transportation. It took a Tampa businessman, E.P. Dickey to dream the dream of a east-west connection between Tampa and Miami, and the Tamiami Trail was began.

According to the Sarasota County History Center, “Surveying and preliminary work began through alligator infested swamps with the help of Seminole guides. Work progressed slowly. Drilling machines often sank in the muck. Ox teams hauled dynamite that was used to loosen the limestone, which was used for the foundation of the roadway.

“After 13 years, the Trail was completed. In Sarasota County the route followed earlier roads from Sarasota to Venice. South of Venice the Trail followed Old Englewood Road and Dearborn Street through Englewood. The official opening was celebrated on April 25, 1928, with the governor and his huge entourage traveling the length of the new road.

The Tamiami Trail cost $8 million, took 13 years to complete, and 2.6 million sticks of dynamite were used in its construction.