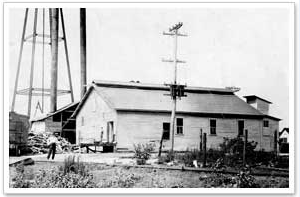 Power to people in Sarasota had flickering history

As summer temperatures surge and Sarasota’s residents and visitors start to wilt in the heat, air-conditioners and the electricity needed to run them today is a foregone conclusion.

It wasn’t always that way. Not by a long shot.

Several years passed before Porter flipped the switch to the Sarasota Ice & Power Co., located at State Street and Lemon Avenue. It wasn’t greeted with huge cheers by residents.

This is how Karl Grismer put it in his book “The Story of Sarasota.”

“The electric service couldn’t be depended upon. Hardly a night passed without at least one breakdown at the light plant. Moreover, the current was turned on only from dusk to midnight. On moonlit nights, there were no street lights at all. During the daytime, no current was available for electrical appliances.

“Not until Dec. 7, 1911, did the company graciously condescend to provide ‘breakfast’ current, from 4 a.m. to 6 a.m. During the winter, it’s still dark at 6 a.m. — but that made no difference. The company insisted it couldn’t give any more ‘concessions.’”

June marked a highlight that probably did more to get the Sarasota Ice & Power Co.’s switch thrown. Grismer described it this way.

“It announced with pride on June 8, 1916, that beginning the following day it would inaugurate an ‘ironing service’ from 7 to 11 a.m. on Tuesday and Friday. ‘We trust,’ said the company, ‘that the women of Sarasota will make the fullest use of this innovation.’ They did. But they weren’t satisfied. They couldn’t understand why the company couldn’t let the current on all day long so they could iron whenever they cared to. But that was too much to expect.”

Voters got fed up and approved purchase of the plant a few years later. On Jan. 15, 1920, the city’s new electric company finished the long-awaited improvements. Power was provided to the business and residential areas of the city — day and night! — and there were even street lights on Main Street.

Things went smoothly for years. Then, in the 1940s, all decided that Sarasota needed a deepwater port facility. They sold the power plant to Florida Power and Light Co. for $1 million. FPL built a new plant near Payne Terminal at 10th Street on U.S. 41 and turned on the juice Jan. 18, 1946.

The plant added and added its capacity until it was decommissioned in 1965.

The “port” at Payne Terminal had one deepwater ship arrive and depart. There was some good to come of the port fiasco, though: all the dredged material was used to create City Island, home of the Sarasota Sailing Squadron and Mote Marine Laboratory, among other entities.

The man generally regarded as the father of air conditioning was Dr. John Gorrie of Apalachicola, Fla. He determined that cooling his patients aided in their recovery of various ailments and eventually patented the first ice-making machine on May 6, 1851.

His work in the world of ice eventually led to those cool summer days we enjoy compliments of our air conditioners.