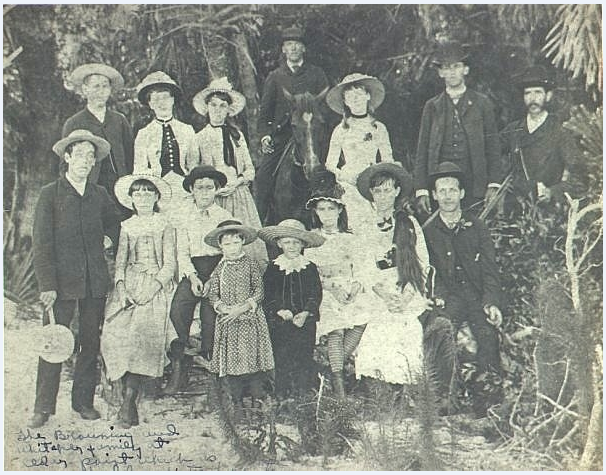 Bill Whitaker embarked on a great adventure throughout his life. Much of his Tom Sawyer-esque experiences took place in Sarasota as the eventual town’s first white settler.

He first made ends meet through the bounty of the bays. Cuban traders plied the Southwest coast of Florida buying dried, salted fish, paying upwards of a penny apiece. It was easy money.

As Karl Grismer’s “The Story of Sarasota” chronicles, mullet were everywhere.

“During the winter months the bay literally churned with them. They came in immense schools, more than a mile long and hundreds of yards wide — so dense it seemed as though a person could walk upon them. Whitaker could take a cast net and fill his boat in a few minutes.”

But from his idyllic landfall in December 1842 was followed in October 1846 with some grief in the form of a massive hurricane. The storm pretty much blew most of the water out of Tampa Bay with its northeasterly winds.

The Rev. Edward Franklin Gates, eldest son of Manatee’ first white settler, said only “a few holes or basins of water here and there with a channel down the center” was the shape of Tampa Bay.

Sarasota Bay and Whitaker fared well in ’46. The “granddaddy of all hurricanes” in 1848 changed that feeling of complacency regarding storms.

The Sept. 22, 1848, storm came from the southwest and pushed water and waves from the Gulf of Mexico onto shore and into the bays. After the blow came what some say is one of Bill Whitaker’s greatest contributions to Sarasota history. Again, from Grismer:

“After the wind had subsided, Whitaker looked out across the bay to see whether his nets [on Longboat Key] were safe. Not a trace of them could be seen. The sandy beach where Whitaker had kept his nets disappeared in the hurricane. A new pass through the key had been formed and that’s what Whitaker named it — New Pass. It has borne that name ever since.”

Stormy weather apparently stirred up more than the waters of the bays and Gulf. Bill Whitaker shortly thereafter fell in love with what at the time amounted to a Florida princess.

Mary Jane Wyatt was daughter of one of the wealthiest of Floridians, Col. William Wyatt, gubernatorial candidate who lost by a single vote and later lost much of his wealth during bank crashes.

But the Colonel squirreled some funds away and retired to his plantation on the Manatee River, wife Mary and daughter Mary Jane in tow.

Grismer’s description of Mary Jane is of “a little, black-haired, blue-eyed girl, a wisp of a lass, barely five feet tall, who tipped the scales at exactly 80 pounds. But pretty as all get out — and full of spirit.”

Whitaker courted her for two years before their marriage in June 1851, the first wedding recorded in the region. Their daughter Nancy Catherine Stuart Whitaker was born 10 months later, the first of 11 children in the next 14 years.

Mary Jane Whitaker obviously loved children. She also enjoyed the company of her sparse neighbors, one of whom was Seminole Chief Billy Bowlegs. Although a resident of the Everglades, Bowlegs liked the coast and liked the settlers, both to trade and occasionally cage a free meal.

Harmony was disrupted just before Christmas 1856, when a band of soldiers came upon Bowlegs camp, trampled his banana plants and pumpkin fields, and dug up his potatoes. Bowlegs retaliated and attacked the army camp, injuring four. War began between the Seminoles and settler, a war that lasted more than a year.

Bowlegs and 139 other Seminoles were captured and deported.

Mary Jane and her daughter and son took refuge at Braden Castle in Manatee County. Whitaker, captain of a group of volunteers, fought the Seminoles. His home on Yellow Bluffs was burned to the ground during the skirmishes, and a houseguest of the Whitakers, George Owen, was killed by the Seminoles. He has the distinction of being the only person killed by the Native Americans in the Sarasota region.

After the war, Whitaker and Mary Jane built a new home just east of their former cedar house so she could better cultivate a garden. Whitaker devoted his efforts to raising cattle.

The couple both took part in the War Between the States. Mary Jane successfully drove off a band of marauding Union soldiers. Bill sold cattle to the Confederacy and was an active blockade runner.

After the war the family devoted themselves to their crops, fishing, cattle, and sometimes politics. Bill was a sheriff of Manatee County for a brief period of time. He died after a fall from his horse Nov. 18, 1888. Mary Jane later moved to Tampa and died March 6, 1908. Both, and many of their offspring, are buried at the Whitaker Cemetery at 11th Street and Cocoanut Avenue in North Sarasota, part of their one-time homestead.