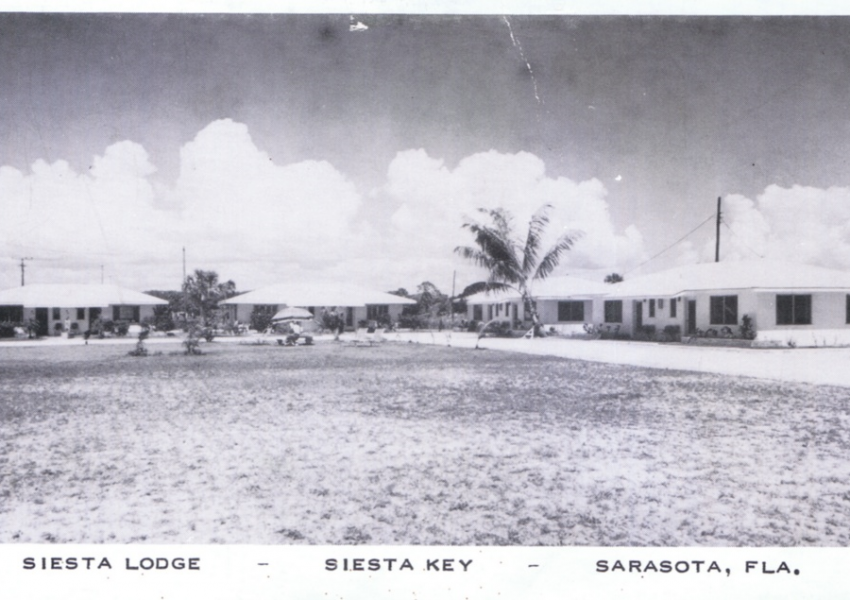 One of the original names for Siesta Key was Clam Island during a time when shell fishing was superb on the bayside. Clams, oysters, and scallops could be harvested almost as easily as catching a week’s worth of fish in an action-packed morning.

As Florida became famous for seafood, one of its many delicious dishes became associated with the original development and later expansion of Siesta Key— clam chowder.

Clams are nutritious and one of the healthiest of all sea foods, especially with regard to their fat and protein quality. Their fat content is especially nutritious because they have relatively low cholesterol levels and provide predominately omega-3 fatty acids.

The names of the streets and waterways around Siesta Key provide historical clues to the pioneers who settled and developed this barrier island.  Arguably, the most successful pioneers were a fisherman for whom Roberts Bay was named, Captain Lewis Roberts and his wife Ocean Deep Hansen.

After sailing annually from Key West to Sarasota Bay for a decade to take advantage of the fabulous fishing, he settled in the area permanently during 1878 as the Captain’s success in commercial fishing was superseded by his romantic discovery.  In fact, he fell head over heels for Ocean Deep Hansen, who was memorialized when her husband named Ocean Boulevard.  She was born on 12 July 1860 to Peter and Mary Hansen while they were sailing as Danish immigrants across the Atlantic Ocean, so they named their daughter Ocean Deep.

Captain Lewis was smitten by this tall young lady while selling fish to the Hansen family, resulting in their marriage during 1881. Soon thereafter, they filed a claim for homestead land across the Bay from Ocean’s parents.

This choice property, known as Roberts Point, is located along present-day Roberts Circle, and is accessed today by Roberts Point Road. Big Daddy built a home for his expanding family and also cleared the land for Ocean’s large garden.  As Lewis enlarged their dwelling, it became a hospitable boarding house for fishermen. In 1906, Big Daddy enlarged the house again and transformed it into Roberts Hotel.  This marks the beginning of the hospitality industry on the island and is a milestone for Siesta Key.

Ocean and Lewis became famous for the delicious meals they served to guests and Sarasota residents who ferried across Sarasota Bay just for dinner.  Naturally, fresh fish was the usual entrée.  But the most spectacular meal was the clam chowder – a delectable comfort food that became known up and down the Gulf Coast.

Big Daddy, likely with help from his many children, dug up the fresh clams, while Ocean adjusted her recipe for whatever ingredients were available. The two of them next assembled everything together in a huge iron kettle.  Lewis then stirred the soup with a wooden oar while it acquired a fabulous flavor simmering for hours. At the beginning of the 20th century, the fishing, food and lodging began attracting winter guests from the north who spread the word about Ocean’s great chowder.

Fast forward one hundred years and we see that the evolution of Siesta Key proves again that “history repeats itself” as Captain Curt’s chowder has had a similar impact in attracting national attention. Thus, the history of the Stewart brothers’ achievement in 2007 winning the Great Chowder Cook-Off with their special, carefully developed recipe for New England style clam chowder is a fascinating story of entrepreneurism.

The creation of an award-winning clam chowder was the culmination of a most interesting sequence of events initiated by another kind of captain— not a boat captain as many have assumed.  In 1979, Curt Marsh retired from his position as a Captain in the Indiana State Police and moved to Siesta Key.  There, he opened Captain Curt’ Crab and Oyster Bar near Turtle Bay.

Among the seafood he served, clam chowder became a favorite.  But the location was not ideal, nor did the demanding role of a restauranteur suit a retired policeman either because Marsh sold the restaurant in 1981.

A better location was found at the intersection of Old Stickney Point Road and Midnight Pass Road at the site of the 1940s Siesta Lodge. Thus, the new Captain Curt’s Clam and Oyster Bar was established there in 1982 by another owner who improved the business over the next decade but also decided to sell out.

Winning the Great Chowder Cook-Off in 2007

In 1994, the Stewart family bought the restaurant and upgraded both the food and the atmosphere.

Soon thereafter, a new recipe for clam chowder was developed by Brad and Brett Stewart.  It was as extraordinary as the Roberts’ recipe but more standardized and loaded with clams that are carefully selected from Maine to Maryland. The most significant achievement of the Stewarts was winning the Great Chowder Cook-Off in Newport, Rhode Island during 2007.  This coveted national award confirmed what Siesta Key residents and visitors suspected about the legendary clam chowder they had been enjoying as arguably the best seafood dish on Siesta Key.

Many restaurants claim to have award-winning clam chowder but the basis of their claims is often dubious. On the other hand, Great Chowder Cook-Off of Newport is a challenging and meaningful competition. It is a wide-open international event that attracts chefs from all regions of the USA and some from Europe.

Approximately 25,000 people attend the event in Fort Adams State Park RI, and there may be up to 100,000 samplings consumed. Every ticket-purchasing attendee is given a ballot, and any time during the noon to 6 PM tastings, voters may drop their tickets into the bins of the station whose chowder they enjoyed the most. Then, the top vote getters are announced at 6 PM all around the park and on the Newport Waterfront Events website.

Departing Siesta Key after a Spring Break or snowbird season used to mean leaving Captain Curt’s clam chowder behind and settling for an inferior recipe elsewhere— often a fish chowder or a predominately potato soup masquerading as clam chowder.

The Stewart family, however, resolved the problem of chowder withdrawal symptoms in 2012 when they developed an ingenious and very successful kit with a fifteen ounce can of chopped, preserved clams and a second can containing all the other “base ingredients” but butter and cream. These kits are now being shipped from Siesta Key to countries around the world.