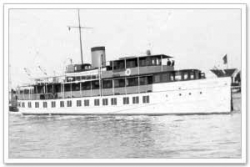 “One exploded and burned. Another ran into an uncharted object and sank. Small or large, John Ringling’s yachts were a signal to local residents that he had a presence in Sarasota.”

The “presence” element — horrible circus fire that killed more than 160 people in Hartford, Conn., failed real estate projects, an abandoned hotel left crumbling for decades on Longboat Key, bankruptcies — set aside, his boating problems and the cast of characters involved read like a mystery novel.

And anyone who has ever owned a boat will recognize this cacophony of catastrophes as being even beyond the kin of the joys of boat ownership.

Circa 1910, Ringling owned a small yacht named Wethea. He used the vessel to entertain dignitaries as they tooled around Sarasota Bay and other Southwest Florida ports.

Ringling exchanged the Wethea for the Vidoffner II in 1917. His latest 110-foot yacht began Ringling’s spate of bad boat luck Feb. 13, 1920, when it exploded. The boat was getting new engines and receiving other repairs at port in Tampa when it blew up.

Crewmember Ben Olson died in the explosion. Chief Engineer Erwin Gremli suffered serious burns. Boaters may question why a boat needs new engines after three years, but the record is mum on the need or rationale.

Ringling was undeterred in his need for yachting and purchased the “Zalophus” for $200,000 in January 1923. She was 125 feet long, had six staterooms, and held smaller cabins for what could only be described as housing for myriad servants.

As historian Shank put it, “The Zalophus was well suited to the kind of hospitality Ringling hoped would impress potential investors and buyers, especially those whose name and fortune attracted attention.”

Attention did indeed strike the yacht at 3 a.m. Feb. 4, 1930. Reports indicate that the vessel struck an uncharted rock and sank.

Two crew members were injured, but the four passengers escaped without injury. Then the mystery began and lasted for several years.

As Shank phrased it, “Years later the story emerged that two of the unnamed passengers had been New York Mayor Jimmy Walker, who had several times visited the Ringlings in Sarasota, and actress Betty Compton.”

Also aboard was reportedly Mr. and Mrs. Sam Gumpertz. Oh, and they were all on their way to Useppa Island.

And as an FYI, why was Ringling in New York when all of New York was visiting him in Sarasota?

Jimmy Walker was a songwriter (Will You Love Me in December (as You Do in May)?) and was a New York State Assemblyman and Senator until his election as New York Mayor in 1926. He had no problem with speakeasies during his terms during Prohibition nor chorus girls like Betty Compton, for whom he left his wife.

After intense federal investigation, Walker resigned his office in 1932 and went to Europe, where he married Compton. Walker’s life was featured in a 1957 film “Beau James” starring Bob Hope.

“Dreamland” morphed into Coney Island circa 1911 in New York. Samuel Gumpertz took over management. It was slated to be high-tech, high-class entertainment with what was described as 1 million light bulbs illuminating its buildings.

Just before opening night there were some last-minute repairs to a concession called Hell Gate, a boat trek through dimly lit caverns. There were leaks. There was tar to fix the leaks. The light bulbs began to explode. Fire ensued. Fire hydrants weren’t operational, and the facility was completely engulfed in flames and destroyed.

Useppa Island is located in Lee County northeast of Captiva and Sanibel. It was bought by Barron Collier (Collier County) in 1911 and at various points entertained dignitaries such as Henry Ford, Thomas Edison, the Vanderbilts, President Herbert Hoover, the Rockefellers, the Rothschilds, Gloria Swanson, Shirley Temple, and Zane Grey.

Useppa Island later gained some level of infamy as the staging ground for the ill-fated Central Intelligence Agency’s (whatever) at Bay of Pigs in Cuba in 1961.