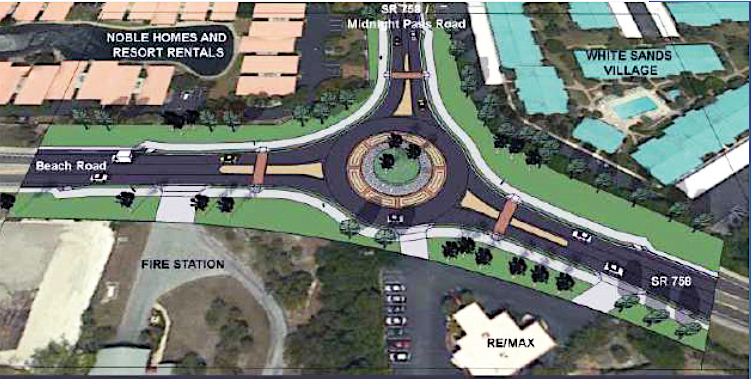 Even though the majority of respondents to a Sarasota County survey conducted in October opposed the idea, the County Commission has voted unanimously to direct staff to proceed with plans for a roundabout at the intersection of Beach Road and Midnight Pass Road.

Public Works Department Director Spencer Anderson recommended the action during a Dec. 8 presentation to the board.

Commissioner Alan Maio made the motion, and newly elected Commissioner Ron Cutsinger of Englewood seconded it.

Maio said he believes the roundabout “will function real well.”

It took less than 18 minutes for Anderson’s presentation and the board vote.

Maio reminded his colleagues that, only about six months after he was elected to his first term, in November 2014, staff of the Florida Department of Transportation (FDOT) began talking about plans to improve the Beach Road/Midnight Pass Road intersection. At that time — in early to mid-2015 — the overwhelming response among Siesta Key residents was opposition to a roundabout, Maio continued. “That [viewpoint] seems to have moved a bit.”

He did ask Anderson about comments in an email the commissioners and Anderson received earlier that day from Siesta Key Association (SKA) President Catherine Luckner. Among those was what Maio characterized as “a pretty strong concern about how the pedestrian and bike traffic will move through this roundabout.”

Sidewalks will be connected outside the roundabout, Anderson replied; those will be “a few car lengths” from the structure.

In regard to bicyclists: Anderson explained that they will be directed away from the traffic flow in the roundabout, “so that they don’t actually interface with the vehicles in the roundabout.”
Further, Anderson noted, the design could incorporate a special type of pedestrian crossing signal, called a HAWK system, which persons activate. Those signals will stop traffic outside the roundabout, he added.

Maio also asked for confirmation about what he called the “standard engineering theory” regarding roundabouts — that “the T-bone accidents at speed, that kill people, are dramatically reduced.”

Anderson responded that that is correct.

Commissioner Christian Ziegler asked whether a roundabout would in any way impede the operations of the firefighters-paramedics at Fire Station No. 13, which is located near the Beach Road/Midnight Pass Road intersection, or the Siesta Key Breeze trolley.

All drivers tend to stop when they see a fire truck with lights on, Anderson told Ziegler, so he did not anticipate any problems. As for the trolley: Anderson explained, “The roundabout will be designed to handle all types of vehicles.”

Ziegler also asked about the potential of the roundabout design to incorporate other safety features, indicating that he would like to ensure that every feasible step is taken in the design to enhance safety for motorists, pedestrians and bicyclists.

“We will evaluate every option that’s possible there and rule them out one by one as the design moves forward,” Anderson said. FDOT has committed to paying for the construction, he continued, “as long as [the design] is reasonable …”

From what he had heard, Anderson told the commissioners, traffic backs up at times all the way from the Stickney Point Road drawbridge to the intersection of Beach Road and Midnight Pass Road. “If that’s the case,” he added, “there’s going to be gridlock regardless of what the intersection improvement is. We can make adjustments in the design,” he pointed out, “for anything that we might feel is appropriate to consider.”

The county must complete the roundabout design by October 2021 for delivery to FDOT, Anderson said. That expense is expected to be about $360,000.

Then FDOT would construct the roundabout starting in the spring of 2022, in conjunction with its plans to resurface Midnight Pass Road from the Stickney Point Road intersection to Shadow Lawn Way.

Anderson also discussed an online county survey that was available to the public from Oct. 5-31.

Of the 552 responses, 32.07% wanted no change at the intersection of Midnight Pass and Beach roads; 33.15% wanted a roundabout; and 29.89% sought an improved signalized intersection.

The majority of the respondents — 68.55% — live on Siesta Key, according to a graph he showed the commissioners.

Responses to the board decision

Responding to a request for comment, Mason Tush, chair of the Siesta Key Chamber of Commerce, told the News Leader in an email, “After reviewing the two options proposed for that intersection (one being the roundabout and a second option of a new traffic signal that would remove the ‘free flowing’ right turn lanes), the Siesta Key Chamber of Commerce Board of Directors supported the roundabout.”

Noting that the Siesta Key Condominium Council (SKCC) represents 95 complexes on the island, the organization’s vice president, Diane Erne, wrote in an email: “I am sorry to hear that, despite the County survey results (61.96% of Everyone and 67.5% of Siesta) indicating the public’s lack of support for a roundabout on Beach and Midnight Pass Road, the County Commission decided they knew best and approved the roundabout.”

She added, “Given the pressure on the County budget at this time, I can only hope that more pressing Siesta Key issues related to traffic congestion, bike and pedestrian safety are fully considered.”

During the Dec. 9 SKA meeting, SKA President Luckner pointed out that the nonprofit “got lots of compliments” from the commissioners for encouraging people to participate in the survey.

What she emphasized in her Dec. 8 email to the commissioners, she continued, “was that we want people to be safe,” as the island has so many people who walk and use bicycles, “and that is not a typical roundabout-friendly area” at the intersection of Beach Road and Midnight Pass Road. Still, she expressed optimism that the final design would allay the SKA’s concerns.