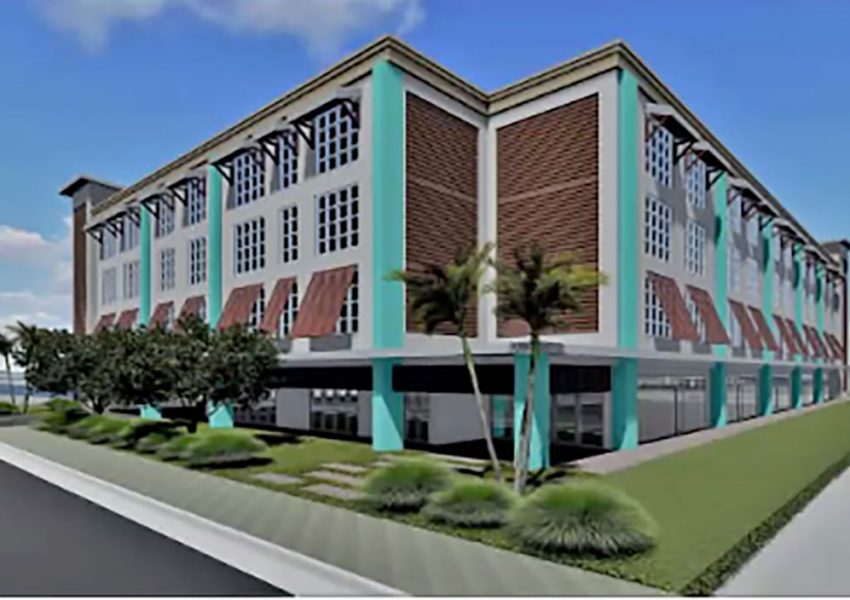 Over about three-and-a-half hours, divided between two events, Siesta Key residents let their feelings be known about a proposed seven-story hotel on Old Stickney Point Road and a five-story parking garage across the street on Stickney Point Road.

Not one participant in the informal Neighborhood Workshop conducted on December 2nd or anyone who spoke during the county-mandated event on December 15th offered compliments.

In fact, the first speaker on December 2nd, Lourdes Ramirez, a long-time community activist, summed up the feelings of the majority toward the project: “We just can’t handle it.”

The island does not have sufficient infrastructure, including the road network, she said, to accommodate the guests who would stay in the hotel’s 120 rooms.

On December 15th, Ramirez took issue with statements that attorney Charles D. Bailey III of the Williams Parker firm in Sarasota made about the residential density permitted on the hotel site, which is zoned Commercial General (CG).

The proposal calls for “four times what is allowed on that [hotel] parcel,” she said.

“We’re not being cutesy or trying to hide anything from anybody,” Bailey responded, adding that he merely had been referencing county metrics for counting hotel rooms.

At the outset of both presentations, Bailey and Medred explained that the concept calls for a boutique hotel comparable to the Marriott hotel company’s signature brands.

The developer is Dr. Gary Kompothecras, the Siesta Key resident known for his 1-800-ASK-GARY medical and legal referral service.

On December 2nd, Ramirez said the proposal is “just going to open up the floodgates on mega hotels.”

If any county commissioner was listening to the December 2nd discussion, Richard Oberdorf told Bailey and Medred, Oberdorf wanted to assert, “There’s too much density on this island. The residents don’t want more density.”

Along with the parking garage and the hotel, Kompothecras’ team has proposed an amendment to the county’s Future Land Use Policy 2.9.1, which would double the density for hotels in what Kompothecras calls the “South Bridge Area” of Siesta Key, referencing the drawbridge on Stickney Point Road. Instead of a hotel room counting as one-half a dwelling unit, it would count as one-fourth in the South Bridge Area.

A companion text amendment would modify Section 124-305 of the county’s Unified Development Code, which contains all the zoning and land development regulations.

“It’s somewhat unusual for residential density to be applied to hotel rooms,” Bailey pointed out during the December 2nd workshop. “The City of Sarasota does not do that,” nor do most other jurisdictions, he added.

During the December 15th workshop, resident Mark Spiegel, leader of an organization called the Siesta Key Coalition — which was organized in early summer to try to fight plans for a 170-room hotel proposed on four parcels between Calle Miramar and Beach Road — asked how many floors would be needed for the hotel if the project team did not seek the extra density.

“It depends on the design,” Bailey replied, “but three or four stories, probably.”

“Did Dr. Gary ever consider actually submitting a plan that complies with the [county’s Future Land Use policy for the barrier islands]?” Spiegel asked.

“An economic analysis was done with consultants from the hospitality industry,” Bailey said. Such a project was “not financially feasible.”

Facets of the Kompothecras plans

During the workshops, Medred explained that the hotel has been designed to stand 83 feet above base flood elevation, which references Federal Emergency Management Agency (FEMA) rules regarding building in flood zones. The garage has been planned to be 54 feet above base flood elevation. On the ground floor of the garage, “a minimum of 6,900 square feet” of commercial space would be provided, he added.

The project team also must gain county approval for the proposed shorter street setbacks for the parking garage, Medred said.

Seventy-two of the garage spaces will be dedicated to hotel guests, Medred added, with 20 set aside for the retail shops.

During the December 15th workshop, Mason Tush, whose family owns CB’s Saltwater Outfitters and the site of the Stickney Point Road Daiquiri Deck, asked why the proposal calls for the extra spaces. If the project team built a structure with just enough spaces for the hotel and shops, Tush said, “You might only need two floors. … Why should we … support a garage that’s five stories high that’s going to tower over the surrounding area when you don’t need the extra parking?”

When the team began working on the proposal, Medred replied, “There was a lot of input that we received about needing additional parking out on Siesta Key. That was kind of the mindset we had.”
Medred added, “We actually can be an asset to those businesses on Old Stickney Point Road …”

“In fairness,” Tush told Medred, “I built the Daiquiri Deck to [County Code stipulations],” including providing the required patron parking spaces. “The businesses don’t really need the extra parking,” he added, because of the two paid parking lots on Old Stickney Point Road.

Medred also has explained that, given the necessary county staff work before the proposal will come before the county’s Planning Commission and then the County Commission, “We’re over a year before we can even think about starting any kind of construction.” In fact, he added, an 18-month-long timeline would be more likely.