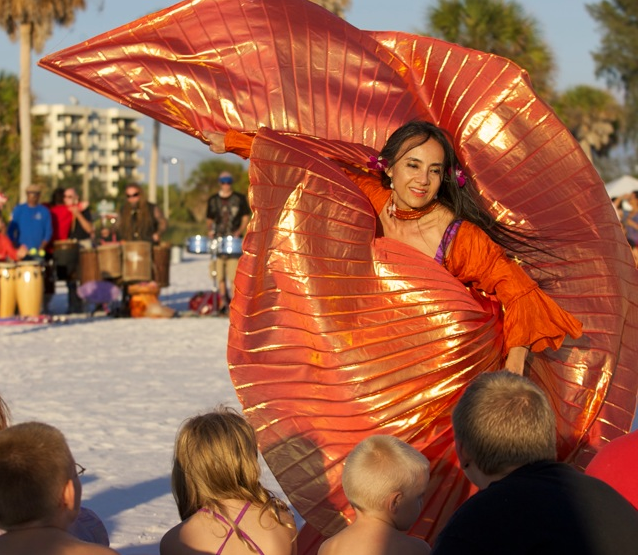 The Siesta Key Drum Circle takes place at the public beach every Sunday, rain or shine. Locals and tourists alike get swept up in pulsating rhythms. Dozens of drums and percussion instruments play, and the sound is mesmerizing. An acoustical zither is hammered into a twanging sound, contrasting sharply to the booming voice of an Aboriginal didgeridoo.

The center of the circle is marked by a LED ball. If the sun hangs low on the horizon, the ball is as pale as the moon. As the evening darkens, however, the ball begins to glow with the lush colors of sunset. A rim of flowers has been placed around this ball, framed by a feathery wreath made from leaves of fern. There is no significance to this arrangement other than to mark the center of the circle, allowing dancers to orbit the light like planets around a sun.

A community of people has gathered at the edges of the circle, people from all backgrounds and ages. The crystal sands of Siesta feel silken against bare feet, and it is a happy place for children, who run and dance and toss twirling sticks into the air. Nearby, an accomplished young woman wearing tall lace-up boots controls a hula hoop with authority and grace. Behind her a voluptuous belly dancer unfurls long ribbons of silk, its tentacles enveloping her in ripples of brilliant color. A magnificently pregnant lady floats past, toddler on one hip and another clutching at her skirt.

As the hypnotic pounding of the drums blends with the cry of seagulls, a white-bearded man in a 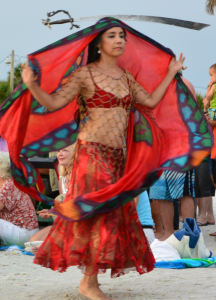 jester’s hat coaxes onlookers to move away from the drummers so dancers can move freely about. A tiny lady glides past. She wears a green sequined top and a gossamer skirt, and the arc of a scimitar is balanced precariously on top of her head. It’s Dr. Marguerite Barnett, for many years a key player at the Siesta Key Drum Circle. She’s a Harvard trained double-board certified cosmetic and reconstructive surgeon, and her passion is dance.

This remarkable woman performs at most of the Sunday night drum circles, sometimes using a lighted hula hoop, and sometimes large fans with scarves attached. (She would use her flaming hula hoop if authorities would allow, but fire is forbidden on Siesta beach.)

Licensed in both Hawaii and Florida, Dr. Barnett is a certified diplomate of the American Board of Surgery and the American Board of Plastic Surgery. She has served as chief of surgery for USAMEDDAC in Bremerhaven, Germany, at Soto Cano Air Base Hospital in Honduras, and at Bon Secours Venice Hospital (now Venice Regional Medical Center) where she is presently on staff. She combines her expertise in the most advanced plastic, reconstructive, hand and micro-surgical techniques with the wisdom of ancient Eastern healing arts to create a new healing vision at Mandala Med-Spa and Yoga Shala located at 1715 Stickney Point Rd. (www.mandalamedspa.com)

At each of Siesta Key’s Sunday night gatherings, Dr. Barnett brings flowers as a gift from the garden, presenting them to drummers and dancers as well as onlookers in the crowd. She is the one who places the lighted globe to mark the center of the circle on the sand. “I like to stay centered,” she says with a smile.

Her back story is unique. Born in Japan, Marguerite was adopted at the age of one by a fundamentalist Chaplain in the U. S .Army, and she grew up on American military bases all over the world. She always wanted to be a doctor and she also loved to dance. Her parents did not approve of dancing, but Marguerite could find nothing negative about it.

After graduation from University of Texas in Austin, Marguerite was accepted to study medicine at Harvard. Surprisingly, her horrified parents promptly disowned her! You see, her adopted father had attended Chaplain’s school at Harvard, and came away thinking of it as a school for heathens. It was the 1970’s, Patty Hearst had been kidnapped, and Harvard looked to this fundamentalist military Chaplain like a place steeped in dangerous thought.

Since she no longer had the support of her family, Marguerite joined the U. S. Army in order to obtain a Health Professions Scholarship. In exchange for completing her medical education, she would be obliged to serve as a doctor in the military for a number of years. This scholarship paid for all her tuition and books at Harvard, but she had to earn her own living expenses. Like most students, she first turned to waitressing, which took long, hard hours away from her studies.

Her roommate was an Algerian girl, who was also a belly dancer. (In Algeria, mothers teach their daughters to belly dance. The women only dance for each other, not in front of men.) In America, however, her Algerian roommate had found a cushy job at a Cambridge restaurant performing as a belly dancer for twenty minutes twice each evening, once at 7:00, and again at 9:00.

When her roommate fell ill, Marguerite went to perform as a substitute. To her amazement, she found that the job not only allowed her to study for 90 minutes between performances, it also generated as much money as being a waitress!

Being slight of figure and not voluptuous like traditional belly dancers, Marguerite distracted her audience by using props and learning to balance the sword. She danced her way through Med School, and then went off to serve for eleven years as a trauma surgeon in the U. S. Army. She continues to steadily expand her dance skills to include Balinese dances and the classical Indian Bharatnayam. She has also studied Sufi dances, pole dancing, aerial silks, hula-hooping, and the Spanish flamenco. “I see music almost like colors,” says this doctor/dancer. “I see movement when I hear music.”

Besides being active with the drum circle, she also performs with drummer Shawn Bowen— a 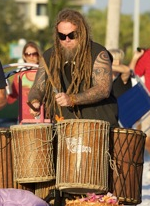 professional musician—as well as other bands. Shawn is a multi-instrumental player and music video director who usually plays guitar with a hard rock, heavy metal band. (He played for years with the band Neurotica, and currently fronts Didges Christ SuperDrum, and plays guitar for Stones of Madness. This extraordinary Renaissance man is also a glass blower and a gifted photographer who creates handsome digital art (www.ShawnBowenArts.com.) At the Siesta Key Drum Circle, however, he’s just the guy with dreadlocks playing the African Djuns (bass drums.)Shawn and Marguerite Barnett met at the circle when he joined the group in 1996, and have been partners for the past seven years. (“He’s very easy going,” says Marguerite. “He doesn’t resent the time-demands of my practice.”) They both have continued to anchor the drum circle group by their strong commitment, but are quick to say that no one is really in charge. A drum circle is an organic thing, and there is no leader.

At the Siesta Key Drum Circle, a few rules of etiquette need to be observed:
The inside of the drum circle is for participants only, not for people standing around.
Feel free to enter the circle, take a picture and dance, but always keep moving.
Never play someone’s drum without getting clearance from the owner.
Always ask before borrowing other people’s property, especially hula hoops.
Flash photography and bright video lights are distracting, so photograph during daylight or use a night vision camera.
And finally, please do not drink alcohol or smoke inside the circle.