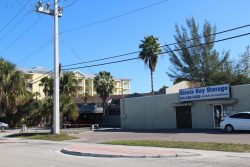 It all came down to a question of the correct interpretation of the Sarasota County Zoning Code involving potential commercial redevelopment on Siesta Key. In a case focused on an application from a Siesta Key resident, the county’s Board of Zoning Appeals voted 3-2 to affirm the county zoning administrator’s determination: Taller buildings need greater setbacks from the street.

During a 90-minute public hearing on June 12, Charles Bailey III— the attorney for Siesta Acquisitions LLC — told the five-member board that Zoning Administrator Donna Thompson was wrong in asserting that another section of the Zoning Code overrules the language in the approximately 15-year-old Siesta Key Overlay District (SKOD) part of the code. The SKOD, he said, was created specifically to encourage commercial redevelopment on Siesta Key.

(According to the Florida Division of Corporations website, the manager of Siesta Acquisitions is Dr. Gary Kompothecras; he is a chiropractor best known for his “1-800-Ask-Gary” advertising for medical referrals to his chain of clinics.)

The zoning determination Thompson issued on April 5 — in response to a letter Bailey had sent her — was that in the districts zoned Commercial General (CG) in the SKOD, the minimum street yard setback for a building is 2 feet. By right, under the Zoning Code, the maximum height of a structure in CG is 35 feet, she wrote; however, an applicant may request a special exception for a building to stand as tall as 85 feet on a barrier island in a CG zone. Once a structure proposed to be higher than 35 feet has been approved, she pointed out in the letter, the street yard setback “shall be 25 feet or one-half of the building height, whichever is greater (bold for emphasis).”

It took two votes before the board ultimately sided with Thompson. The first motion — to overrule Thompson’s interpretation of the Zoning Code — failed 2-3. Made by Vice Chair Frank Malatesta, it won support only from Chair Paul Radauskas.

At one point during the hearing, Arthur acknowledged a struggle with which Zoning Code interpretation was correct. However, he continued, the potential for an 85-foot building with just a 2-foot street setback “is a little excessive in promoting an active pedestrian life.”

Board member James Piatchuk recused himself from the hearing on the basis of ties to Siesta Key, he said.

Assistant County Attorney David Pearce — who serves as adviser to the Board of Zoning Appeals — explained that Siesta Acquisitions has the right to file a Petition for Writ of Certiorari in the 12th Judicial Circuit Court in an effort to overturn the board’s decision. That action must take place within 30 days of June 12, Thompson noted.

SNL asked Bailey for a comment after the hearing, but he did not respond prior to Siesta Sand’s publication deadline.

A voice from the past

During the hearing, Bailey said, “This [SKOD] district was to promote pedestrian life by encouraging new commercial buildings … to build to the sidewalk.”

Jim Ley, who served as the county administrator from 1997 to 2011 — the period when the SKOD was put into effect — also disputed Thompson’s interpretation of how the SKOD should be applied to street setback scenarios. Explaining that he was involved in the “lengthy but well-considered process” to create the SKOD, Ley told the board, “The County Commission knew it was dealing with a limited universe of commercially developable property on Siesta Key.”

Even if the Board of Appeals ruled that Thompson’s interpretation was incorrect, Bailey stressed, that would not guarantee a 2-foot setback for a new building in a CG district: The County Commission could require a greater distance from the sidewalk.

The focus of the discussion

On June 12 — for the first time — Bailey also acknowledged that the focus of his client’s interest is in property zoned CG on Old Stickney Point Road.

During a December 2016 neighborhood workshop, Bailey and Robert “Bo” Medred, a former county planner who heads up his own firm in Bradenton, proposed amending the county’s Comprehensive Plan to allow for property zoned CG on the barrier islands to be redeveloped to provide transient accommodations. At the time, Bailey emphasized that Siesta Acquisitions had not settled on a site for a boutique hotel project it was considering, if the amendment were approved.

However, Kompothecras owns CG property at 1260 Old Stickney Point Road, adjacent to the site of the former Fandango Café, according to the Sarasota County Property Appraiser’s Office.

Bailey stressed on June 12, “To be clear, there’s not a specific project before the Board of Zoning Appeals this evening.”

Nonetheless, board member Hemes asked Bailey, “Do you have a specific address on Siesta Key for the building of a structure?”

Then Bailey explained that on the whole island, only about 30 acres of area zoned CG is available. Siesta Village and Old Stickney Point Road have the majority of that property, Bailey added, noting that a project for his client would “likely not be in the Village. We would likely be down on Old Stickney Point Road.”

(In response to a request for an update on the status of the proposed Comprehensive Plan amendment, Brett A. Harrington, a county planner, reported on June 13 that staff has not received any formal application yet.)

Nine members of the public urged the board on June 12 to uphold Thompson’s interpretation of the Zoning Code. Many of them voiced concerns about increasing population density and intensity of uses on the island. Among the speakers were Joe Volpe, a director of the Siesta Key Association (SKA), and Diane Erne, vice president of the Siesta Key Condominium Council.