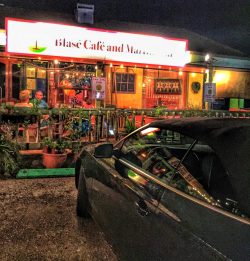 Over 20 years, a bar where Elvis and Mariyn sat, and acclaim came to Blasé Café

When Cynthia Breslin opened Blasé Café twenty years ago, she had only one indoor table and one chef. Over the years, the restaurant has expanded several times, adding a vintage martini bar from a historic hotel and now has five total chefs.

The bar, brought to Blasé about 12 years ago, is the original from the historic Don CeSar Hotel in St Pete Beach. “Elvis and Marilyn Monroe sat there,” Breslin said.

Over two decades, Blasé, located at 5263 Ocean Blvd. in the Village, has also added a loyal following among local residents and seasonal visitors, as well as acclaim for its martinis and food menu. “There is nothing blasé about Siesta Key’s Blasé Café and Martini Bar,” wrote a reviewer in a 2013 post on the Sarasota Foodies website.

Two years ago, Breslin opened Pi 3.14, offering pizza and craft beer, in the space next to Blasé. Then about a year ago, the chef and restaurateur partnered with Kevin Skiest, a Siesta resident and owner of Flip Flop Cottages, 8254 Midnight Pass Road. And the business partners are working to expand entertainment offerings at both Blasé and Pi. They brought back Sunday brunch and just started hosting Drag Queen Bingo with Lindsay Carleton Cline every other Monday at the café. “It’s a blast,” Breslin said of the bingo events. In addition, they are hosting karaoke at Pi every Wednesday. “Twenty years is a great success,” Skiest told Siesta Sand. “She has had some rough times as every business owner has, and she is still here and has an interesting restaurant and great food.”
The restaurant has become known for its hit-the-spot food and intimate, fun atmosphere. Many of the customers have become regulars, and Breslin calls the staff her extended family.

Breslin’s love affair with serving great food begins with her own family. “My mom and grandmother were fabulous cooks,” Breslin said. The kitchen for her was always a “happy place,” and the matriarchs of her family were always cooking up southern style meals with love.

Her mom was thrilled when she opened Blasé because she knew it was what Breslin always wanted to do. “Mom spent a lot of time here, and she would help me cook,” Breslin recalled.

Breslin’s other passion, for art, is showcased throughout Blasé. She is a former student of Ringling College of Art and Design, and many of the paintings in Blasé are her own. Currently, the café is showcasing other works by David Stahl and Deborah Toger.

Although Breslin says at times she never thought she would get past the first year of businesses, she has come to love the regular customers and the energy of the restaurant staff. “I just adore them, they are my extended family,” Breslin said.

Breslin said the partnership with Skiest has allowed the businesses to operate smoothly. Breslin, who has a bad back, said she just “couldn’t do it all myself anymore, and he helped me when I needed it the most.” Skiest, the owner of Flip Flop Cottages, has been a constant presence at the café, and has been spearheading the effort to bring new entertainment offerings.

“We are going to push the envelope to bring new and exciting things out from time to time,” said Skiest, who has a business background.

In the past, the hardest struggle at Blasé was dealing with an incredible peak season and a slow off season. “We do in one week what we do in an entire month in August,” Breslin said, noting the restaurant runs specials to bring in local residents or tourists who happen to be in town during that time.

She continues to see the two restaurants as a work-in-progress—like an evolving piece of art—expanding and improving the businesses whenever she can. And she still cooks at Blasé, though not as frequently as she used to.