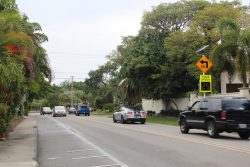 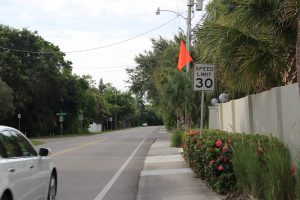 It took a few tries in August, but Florida Department of Transportation (FDOT) crews finally had signage installed to lower the speed limit from 40 mph to 30 mph just in the vicinity of the sharp curve at the intersection of Higel Avenue and Siesta Drive.

At first, Zachary Burch, government affairs & community manager for FDOT, told SNL, crews from the department’s Manatee Operations Office placed the signs in the wrong locations. “They should be located 110 feet south of Ogden Street and 90 feet east of Flamingo Avenue. We apologize for the confusion and will have them corrected very soon.”

Traffic accidents in the sharp curves on the north end of Siesta Key have been common for many years. However, in response to recent resident complaints about speeding — and two incidents with fatalities — FDOT agreed to erect the new signage.

FDOT’s District One communications specialist, Robin Stublen, announced the plan on June 29, but Burch explained that FDOT had to get a formal regulation approved to make the change.

In related news, the Sarasota Police Department (SPD) charged a 39-year-old Bradenton woman with DUI manslaughter and other counts in connection with an April 3 incident in the area of the Higel Avenue/Siesta Drive intersection.

Electronic signs posted on both the north- and southbound approaches to the Higel/Siesta curve already suggested drivers reduce their speed to 25 mph. As staff of the Sarasota County Sheriff’s Office has explained, the existence of a caution sign advising a lower speed limit may be a factor in citing a driver who has an accident in the affected area, but drivers cannot be ticketed simply for driving faster than the suggested speed.

Email exchanges between Sarasota Police Chief Bernadette DiPino and other city staff members in late June indicated the new speed limit would be marked for a longer stretch of road than Stublen and Burch had mentioned. That prompted Siesta Key Association (SKA) officers to question the decision. SKA directors were worried about the potential for residents to start a new initiative to gain local government permission for use of low-speed vehicles if the reduced speed limit were imposed over a longer stretch of Siesta Drive and/or Higel Avenue. Complaints have increased in the past couple of years about people driving low-speed rental vehicles on the Key, leading to long traffic lines with drivers tempted to make illegal passes.

Regarding the SPD charges in the April incident, the department reported that Irana Negrete was the driver of the single vehicle in that crash. She was in a Dodge Journey, traveling northbound on Higel, when she failed to stay on the road as she approached Siesta Drive, the news release added. Her vehicle plowed into a tree, resulting in the death of Christopher Tirado, 29, of Bradenton, the release noted.

Tirado, who was in the backseat, died at the scene, it adds. Both Negrete and a female passenger — also in the backseat — were transported to Sarasota Memorial Hospital with serious injuries, the news release pointed out.

The Probable Cause Affidavit filed in the case said Negrete's blood alcohol results showed readings of 0.116 and 0.117; the legal limit in Florida is 0.08.

Her bond was set at $115,000, and she was released from the Sarasota County Jail, the release added.

Negrete was the only person in the vehicle wearing a seatbelt, the original news release about the crash pointed out.

The most recent crash near the Higel/Siesta curve was reported about 6 p.m. on June 14. Guy Theron, 57, of Sarasota, died at Sarasota Memorial Hospital as a result of injuries sustained in that incident, an SPD news release noted. Theron was driving a 2008 Dodge mini-van that collided with a 2000 Honda and a Scion at the intersection of Higel Avenue and Faubel Street.

“Both speed and a possible medical issue were factors that investigators believe caused the crash,” the SPD release said.

Ian Lee, 18, of Sarasota, was driving the 2000 gold Honda, the release added, noting that he was transported to Sarasota Memorial Hospital with non-life threatening injuries.

Killian Metz, 17, of Sarasota, also was taken to Sarasota Memorial Hospital with serious injuries, the release said, but he is expected to recover. He was the driver of the Scion.

A passenger in the Scion — Darian Callahan, 19, of Sarasota — was transported to Sarasota Memorial Hospital, too, with critical injuries, but he also is expected to recover, the release pointed out.

Investigators believe Theron was driving his Dodge “at a high rate of speed northbound on Higel Avenue and the other two vehicles were driving southbound,” the release added. Early in their investigation, it continued, officers found evidence to indicate that Theron swerved, striking one vehicle, and then he swerved again, colliding with the second one.

In response to a request for information, Genevieve Judge, the partnership policing communications coordinator with the SPD, provided data about crashes since 2006 in the area of the Higel Avenue/Siesta Drive curve. From Jan. 1, 2006 through June 28 of this year, 62 incidents had been reported.

She noted that the only two fatalities recorded during the period staff researched, were the ones in April and June.

When SNL followed up with Judge in mid-August, she reported that no new crashes had been reported in the area of the Siesta Drive/Higel intersection since the one in June.