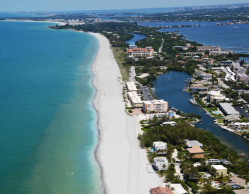 An SNL reader sent an email on Sept. 29, saying, “We have found the proposed south Siesta Key beach assessments in the 2018 Notice of Proposed Property Taxes to be varying from 0 to $1700 for the same units in our complex.”

In the spring of 2016, the county completed its second renourishment of an approximately 2-mile stretch of beach on south Siesta Key, including the area at Turtle Park. As with the first renourishment — in 2007 — property owners in the affected area are being assessed a portion of the expense.

The reader continued, “We have contacted the County and apparently there was a problem in the computer calculation.” County staff assured the reader that the correct assessment figures would be on the property tax bills mailed in November. However, the reader warned that anyone being assessed for the South Siesta Renourishment Project should be vigilant in checking the tax bill.

The reader also pointed out that owners of units on the beach side of one condominium complex on south Siesta are being billed higher assessments than owners on the bay side, even though the residents of that complex share the beach.

The county staff was asked for details about the reader’s comments. On Oct. 3, Laird Wreford, the county’s coastal initiatives manager, responded:

First, he wrote, “Due to a computer sorting error, some of the TRIM [Truth in Millage] notices had inaccurate amounts for the South Siesta Key Beach Restoration assessments. Of the 474 parcels in the assessment district, 195 were inaccurate. Fortunately, this error was discovered prior to the final tax bills [being printed], so those bills will be correct when mailed out in late October. Staff is in the process of sending notifications to the 195 parcel owners, providing them with the correct information.”

Regarding the differences in the assessments for residents of the condo complex, Wreford continued, “The reader is referring to the Bay Tree Club residents. That was a unique situation, where the condo property runs from gulf to bay. There is one building that is gulf front (40 units), and two buildings that are bay front (80 units). It was decided from the first nourishment (and carried forward for the second) that the total assessment for the parcel would be split among the condo owners with the gulf front owners paying twice the assessment of the bay front owners. That split was based on the findings of the property appraisal expert hired by the County to certify the benefits to the assessment district parcels.”