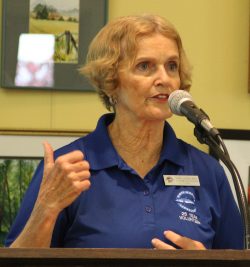 Technological advances — including the use of drones — are among the keys expected to unlock the continuing mysteries of red tide, a 26-year volunteer at Mote Marine Laboratory & Aquarium told about 60 Siesta Key Association members during their May 4 meeting.

Erin Tom “Tommy” Vaughan-Birch, a Florida native who has lived in Sarasota since 1969, explained that while much is known about how the dinoflagellate that causes red tide affects people’s respiratory and gastrointestinal systems, scientists still are working hard to figure out exactly what sparks its quick multiplication at certain times — and how to stop such events without triggering a different type of environmental havoc.

Ozone and a larger type of algae have been shown to inhibit and even kill the red tide algae, she pointed out, but more research is underway.

“How many of you have experienced red tide?” Birch asked as she began her remarks in the Parish Hall of St. Boniface Episcopal Church. One hand of almost every person shot into the air.

Dinoflagellates, such as Karenia brevis — which causes the red tide seen in Southwest Florida — are measured in microns, Birch pointed out. A micron is one-millionth of a meter, she added. “They’re really, really teeny things,” she added of the Karenia brevis organisms.

They become a problem only after they have begun to reproduce rapidly, Birch continued. The result is a “bloom,” she noted, “and that’s when we start to be very interested …”

Karenia brevis is named for Karen Steidinger, a scientist at the Florida Fish and Wildlife Conservation Commission Research Institute in St. Petersburg, Birch noted, adding, “I don’t know that I’d want to have a nasty little thing like that named after me.”

And while members of the public often think Karenia brevis is a recent phenomenon, Birch continued, that is not the case at all. “It’s been around, we know, for about 10,000 years,” based on fossils found in Southwest Florida. Seventy years ago — in 1947 — Birch continued, in Venice, “people woke up and they were coughing and their eyes were burning.” Their first thought was that poison gas left over from the World Wars had been released, she said. Instead, the source of their discomfort was a red tide bloom offshore.

In collaboration many years ago with the National Oceanic and Atmospheric Administration (NOAA), Birch said, Mote found blooms are initiated 10 to 40 miles out in the Gulf.

Karenia brevis is measured in terms of cells per liter, she explained. When 1,000 or fewer of the cells are found per liter of water, that is considered a “background” presence, she pointed out. If the accumulation reaches the level of 5,000 cells per liter, shell fishing in the immediate area is halted, Birch noted, because of the nine neurotoxins the organism releases. Oysters and clams, for example, will accumulate those toxins in their bodies; eating the shellfish can cause illness and even death, she said.

When Karenia brevis reaches the level of 100,000 or more cells per liter of water, Birch noted, “you’re definitely going to have respiratory problems and fish kills.”

If anyone has to be out in an area near such a high concentration of red tide, she said, the person should wear a mask or dampen a bandana and tie it around the face. “People who have compromised respiratory systems really need to avoid red tide,” she cautioned. Anyone with asthma, emphysema and Chronic Obstructive Pulmonary Disease (COPD), especially, she said, should stay in air conditioning and away from the beach.

As for other effects on other creatures: Karenia brevis causes fish to die by paralyzing their gills, she continued. Its neurotoxins also can kill birds, she pointed out. Prolonged outbreaks can harm turtles and dolphins, too Birch said; the dinoflagellate affects their immune systems, making them vulnerable to illnesses.

“We don’t understand the mechanisms” that produce a bloom, Birch explained. Researchers have learned that the organism needs the right temperature and salinity, and they know it feeds on about 12 types of nutrients, including phosphorus and nitrogen. “Let’s just say it’s not a picky eater.”

Runoff from agriculture, for example, does not initiate a bloom, Birch said, but that “can help it persist.”

She reminded the audience members that Sarasota County has an ordinance that prohibits the use of fertilizers containing nitrogen and/or phosphorus from June 1 through Sept. 30 in an effort to prevent runoff during the summer, which typically is the rainy season.

Five different divisions at Mote are participating in research with other entities — such as NOAA and NASA — to try to learn as much about Karenia brevis as possible, she explained.

One Mote scientist is hoping to secure about $75,000 to pay for small drones that could be flown over the water, where they would use “hyper-spectral imaging,” she said. That would enable researchers in the lab to know immediately whether a red tide bloom had begun, Birch added. Among ongoing research at Mote, she continued, Jordan Beckler, who heads up the Ocean Technology Research Program, is working on the identification of the neurotoxins in the algae, and Kellie Dixon, the chief of Mote’s Chemical & Physical Ecology Program, and her team are researching how Karenia brevis responds to various nutrients.

Birch also reminded the audience that Mote has a Beach Conditions Report — which is available through an app as well as on Mote’s website — that provides a wealth of information about what is happening at 30 beaches on the west coast of Florida. Mote staff is working with NOAA and NASA to develop a new app that will allow anyone to take a water sample at the beach and determine right away the concentration of Karenia brevis, Birch pointed out.