Storm Plan was put in place during Irma

Now, after the storm, Landings Management Association makes tweaks to its Storm Procedures

Publishers Note; The Landings is one of Sarasota's most beautiful communities and is ideally situated just minutes south of downtown in the desirable west-of-the-trail (Route 41) location, located between the two Siesta Key bridges on the mainland.

It is a gated and deed-restricted community with a unique selection of estate homes, luxury condos, villas and townhomes. Housing styles vary widely and include Key West, Mediterranean and traditional.

The Landings is a lush setting with homes nestled among stately oaks and pines, and is designed to provide premium views of tranquil lakes and the beauty of nature. Our residents are a mix of families, professionals, retirees, snowbirds and second-home owners. 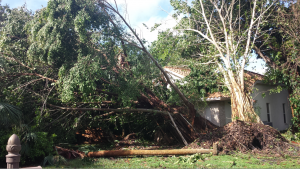 As Irma made its approach to the Florida peninsula, Landings Management Association President Dick Bayles realized that one aspect of the community’s storm plan was a failure.

The LMA had sent the first of several planned robocalls out to update residents on the Hurricane Irma and operations to prepare for the storm within the Landings; yet the calls proved ineffective. “It failed for two reasons,” Bayles told Siesta Sand during an interview a week after the storm. “The robocall was limited to 30 seconds, and I was very rushed to get all the information into [the call]. And only 40 percent of calls hit someone. The rest went either to voicemail or were sent to a bad number.”

The good news is Bayles immediately shifted to a substitute approach — email. The LMA president used the Landings’ internal web site e-mail server to send emails to residents. Another note was then sent immediately after the storm left the area.  “We reached 624 of 700 residents,” Bayles said. Smart phones likely aided in residents’ ability to see the messages. That will now be the default mode of communication leading up to and following a storm occurrence, Bayles said.

Bayles is now working to contact the small portion of Landings residents who did not provide a working email address to the Landings Management Association. He notes that residents need not have their own email; they can provide the address of a relative or neighbor they trust to convey the information to them.

Most of the rest of the Storm Procedures, besides the robocalls, “went well,” Bayles added. As the storm approached the area, the community’s gates were left open so residents could evacuate. Because of the storm, 404 Landings residents, living in Flood Zone A, were part of the county’s ordered evacuation. Another 296 residents were not impacted by the evacuation.

“I believe most people impacted by the mandatory evacuation did [evacuate],” Bayles said.

Landings security returned immediately after Sarasota County gave it’s all clear — as specified in the Landings storm procedures — and residents who left began returning. Bayles sent an email letting residents know there was little major damage, and it was safe to return.

Tweaks, however, in the way the community responds to storm events will be made in regards to two additional changes.

The LMA is working on investigating which of the community’s lift station serve which residences in the Landings. In the event of a shut-down lift station, due to a power failure, residents impacted can be notified to use water sparingly to avoid wastewater spills. The project was spurned by one consequence of Irma.

“About 60 private homes in the Landings north, lost power for about two days,” Bayles said. “One consequence of that was sewer lift station was impacted by that, and of course it backed up. Once the power came back on, it was fine.

“If we know power is out at a certain lift station we can send an email to impacted residents notifying them to use water sparingly,” including not flushing toilets.

The LMA also worked to implement a plan to arrange for storm debris pickup for single-family residences. Sarasota County does not collect storm debris from private roads. After Irma, the Landings Homeowners Association arranged for a contractor to collect the storm debris for its owners, as lawn maintenance contractors generally aren’t equipped to remove that quantity of material.

Storm debris for condos and townhomes within the Landings was arranged by their specific associations.

One of the procedures, in the two page Landings Storm Procedures will be changed to substitute email in place of bulk phone calls, which proved ineffective during Irma.

g. LMA2 will use a bulk outgoing call service to call residents’ cell or “away” numbers prepared from emergency information provided to LMA with a message saying security measures are suspended and to listen to local radio stations for information regarding possible evacuation3. If neither number has been provided, the calls are made to the local number, if known.