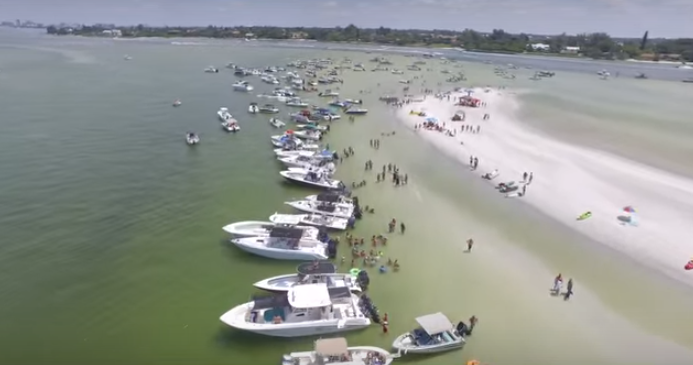 During the July SKA meeting, audience members voiced frustration that insufficient public attention is being paid to the potential dredging of Big Pass to renourish about 1.6 miles of South Lido Key.

One man told the directors it was his first time attending an SKA meeting, and he was present because of seeing the nonprofit’s full-page advertisement in the July issue of Siesta Sand.

The headline is, “Boaters/Businesses: Will this recreational area be destroyed?” The ad features photos of boats and people on the sandbar in Big Pass and explains facets of the U.S. Army Corps of Engineers/City of Sarasota proposal for removing about 1.2 million cubic yards of sand from the pass. (See the related story in this issue.)

There is nothing in the ad “that is not factually based,” SKA Vice President Catherine Luckner told the approximately 35 attendees of the meeting.

Bob Spicer, who recently became an SKA director, explained that the SKA board members have a strategy for more extensive advertising. “This board just needs to agree when and where [to place those ads].”

“People think this is a sand war between Lido and Siesta,” Lorna Nagler said. “This affects everybody. How do we get the word out?” Nagler continued, “It’s not an environmental issue. It’s an everybody issue.” She suggested more use of social media, perhaps with the hashtag #savebigpass.

Luckner pointed out that Spicer — who has an extensive professional marketing background — worked on the Siesta Sand ad with fellow SKA Director Joe Volpe and Dave Thomas, a longtime member of the SKA’s Environmental Committee.

Then Luckner explained to new members that the original Save Our Sand group was an SKA committee that fought to prevent the City of Venice from dredging Big Pass for a beach renourishment project more than 20 years ago, in the early 1990s. (The nonprofit Save Our Siesta Sand 2 — SOSS2 — is chaired by Peter van Roekens, who served as an SKA director for many years before his retirement from the board in 2014.)

The SKA and SOS won that fight in 1994, Luckner continued. In fact, she said, the same law firm that represented SOS in that legal challenge is the firm that the SKA hired for the current challenge: Hopping Green & Sams of Tallahassee.

SOSS2’s members “essentially are partners with us now,” she explained, as the two nonprofits are sharing resources for the upcoming Florida Division of Administrative Hearings proceeding in late August. That will be the first forum for the legal challenges to be fully heard, she added.