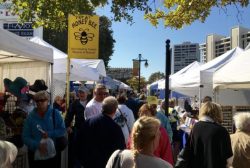 Some business owners have made known their displeasure that vendors during the 39th Annual Siesta Fiesta were not placed north of the four-way intersection on Ocean Boulevard.

Views about the quality of the show’s offerings are mixed, too, based on several interviews conducted.

Produced by Howard Alan & American Craft Endeavors, the event traditionally follows the end of high tourist season. As Mark Smith, chair of the Siesta Key Chamber of Commerce, pointed out, “The whole reason [we created the festival] … was to bring visitors to the Village and Siesta Key during the slow period.”

Yet, the event has had its critics over the years, with some restaurant and bar owners complaining that the closure of part of Ocean Boulevard has reduced their business over Siesta Fiesta weekend. The decision to keep the road open last year resulted in a smaller show, which organizers agreed was not as successful.

This year, Kay Kouvatsos, co-owner of Village Café, told SNL she felt the show was “essentially half the size, if you ask me,” of its installments prior to 2016. “There was nothing from the [four-way] stop sign all the way up to the Old Salty Dog.” She felt that was a disappointment to visitors.

Rick Lizotte, co-owner of Comfort Shoes in Davidson Village, was even more adamant about his distress over the vendor layout. “I was quite upset with the festival.” When he drove into the Village on April 29, he continued, he was surprised to see no booths standing on the north end of Ocean Boulevard.

He has been the co-owner of his shop for about a decade, he pointed out. Up until this year, he added, Siesta Fiesta meant “the two single largest days of the year” for visitors in Siesta Village.

In years past, he added, the SunTrust bank parking lot next to the Old Salty Dog restaurant was filled with vendor tents, for example. Plenty of food vendors added to the festive atmosphere, too, he said. This year, he saw only one booth offering food and two lemonade stands.

Moreover, Lizotte continued, he felt the items for sale were of lesser quality than he has seen in the past. “I remember five or six years ago when there was bona fide artwork” — one-of-a-kind items going for $5,000 to $6,000, he pointed out.

“I would not call it a quality show” this year, Lizotte added. “Way too much jewelry.”

One resident who has lived on Siesta for almost 20 years, she, too, found the offerings to pale in comparison to those she had seen in the past. “I wasn’t thrilled with a lot of it [this time],” Harriet Cuthbert said of Siesta Fiesta.

She walked the entire length of the show — covering both sides of the street, she pointed out. “I was very surprised to see not as many booths.”

Yet, Cuthbert said she was awed by one vendor from St. Augustine, Andrew Mosedale, who was selling photographic works. “I thought he was spectacular. … His work really stood out.” Because of that, she noted, he drew lots of people to his booth.

When she was in Davidson’s early this week, Cuthbert said, she heard several people chatting who shared her assessment about the smaller number of interesting vendors.

Smith of the Siesta Chamber had a different view, as did his friend, Esther Quiles, who is an artist.

“I think [Siesta Fiesta] was much better [this year].” “We had some real artists, not just the crafts. … [Quiles] had the same opinion I had” Smith said.

Although he had heard some comments about the smaller number of vendors, he said he personally would prefer fewer booths with artists of superior caliber.

In past years, members of the Siesta Key Village Association — which used to sponsor the show — pointed out that Howard Alan often has more than one event on a given weekend, and the firm handles the responsibility of choosing which vendors participate in which show. A check of the Howard Alan calendar for the weekend of April 29-30 found the firm was producing a show in Fairfax, Va., at the same time.

As for the Siesta Fiesta set-up this time, Smith explained, “We don’t have any control over where [Howard Alan representatives] put [the booths].” Still, he continued, he had talked with Ann Frescura, executive director of the Siesta Chamber, about working with the firm to ensure vendors are situated along the northern part of Ocean Boulevard in the future. “It would be a good thing to bring ’em further down.”

One other person who was pleased with the event was Peter van Roekens, who lives in the Terrace East building in Siesta Village. For a number of years, Van Roekens has managed the sales of the annual Siesta Fiesta T-shirts; the proceeds went to the Siesta Key Village Association (SKVA). (At the end of 2016, the Chamber absorbed the SKVA.) “People seemed happy,” van Roekens said .

He and his team of volunteers sold about 200 shirts, he pointed out, so they talked to quite a few visitors.

Frescura had sent an email to the Howard Alan firm in early May, seeking its representatives’ assessment of the event.

The Chamber will work to address the concerns of business owners, she added, noting that she, too, had heard some of the concerns voiced to SNL. “With any event,” she pointed out, “there is always room for improvement.”