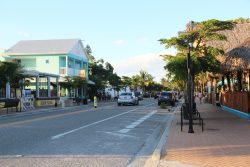 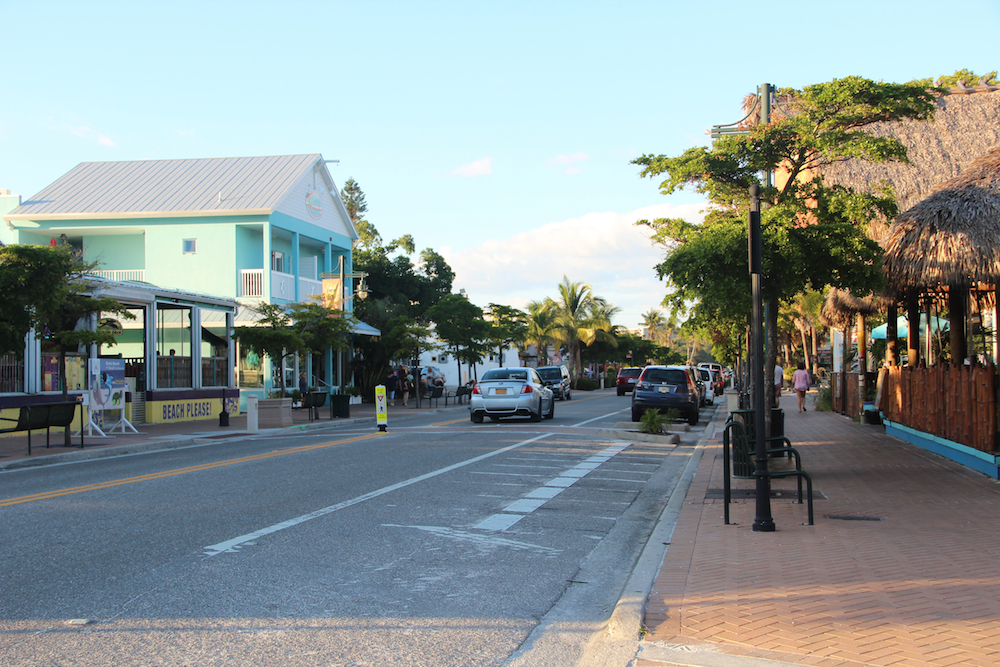 When the Siesta Key Chamber of Commerce held its quarterly meeting in August, Chair Mark Smith talked of a request by Gilligan’s Island Bar to have the motorcycle parking spots moved away from their Ocean Boulevard location in front of the restaurant.

When the Village Beautification Project was undertaken by Sarasota County in 2007 and 2008, he explained, the goal was to create parking spaces specifically for motorcycles, so people who ride them would stop parking on the sidewalks.

He told SNL that because the majority of the motorcyclists seemed to be patrons of Gilligan’s, the Daiquiri Deck and the Siesta Key Oyster Bar, Village leaders asked for the new slots to be painted on the street at that end of the Village. “Basically, [they] take up two [motor vehicle] parking spaces,” Smith said during the Chamber meeting.

Michael Shay, manager of the Siesta Key Village Maintenance Corp. pointed out because the motorcyclists back into the spaces, “exhaust is going right into the restaurant” when they leave.

The Maintenance Corp. asked that the spaces be relocated to the area in front of Siesta Beach Plaza, Smith added at that August meeting, just a little north of Gilligan’s.

Fast forward to Dec. 6: Smith reported that the project still had not been completed. The Maintenance Corp. did not have any funds left in its 2017 fiscal year budget for the work, he pointed out, so county staff had to wait until the new fiscal year began on Oct. 1. “We’re talking about painting,” Smith pointed out, though the work also would include moving kickstand plates in the Gilligan’s spaces.

“It’s going to get there,” he added of the project. “Inch by inch, we’re getting there,” he joked.

Finally, the move has taken place. In a Dec. 14 email, Shay reported that the parking spots were relocated the previous night. The final touches were expected to be completed that day, Shay added.

A memo provided to the board in advance of that meeting pointed out that on Feb. 21, 2012, the County Commission amended the ordinance governing oversight of Village maintenance “to reflect changes regarding procurement of maintenance contracts, determination of tax levy [and] cost sharing between the County and the SKVMC [Siesta Key Village Maintenance Corp.] … relating to distribution of maintenance.” Then, on Sept. 25, 2012, the commission further amended the ordinance to reflect how payments related to Village upkeep would be handled, the memo continued.

The September 2012 amendment specified that invoices for services in the Village, with appropriate documentation, would be submitted to the county. Then, upon county approval of those invoices, the county would pay the third-party vendors for their work.

Cece reminded the paper that in 2012, the Maintenance Corp. asked for the amendment to the ordinance to ensure that county staff would procure all goods and services needed for Village upkeep, so the Maintenance Corp. would not have to handle any of the funds that are raised by a special assessment of Village property owners. The proceeds from the assessments make up the annual budget that pays for the upkeep.

For some reason, Cece stated, the changes the group requested never were made to the ordinance. Therefore, Cece had worked to get that formality taken care of on Nov. 28. She called the process a matter of “cleaning house a little bit.”

Mark Smith of Smith Architects, chair of the Maintenance Corp., concurred in a separate telephone interview that the procurement process would not be changing as a result of the Nov. 28 commission vote. It is “the same thing we’ve been doing.”

He had to sign a document on behalf of the Maintenance Corp., in conjunction with the Nov. 28 board action, he added.

“We’re hopeful that [the Village] will continue to look good,” Smith said. Siesta resident Michael Shay, who manages the Maintenance Corp., and Cece “continue to do a wonderful job.” 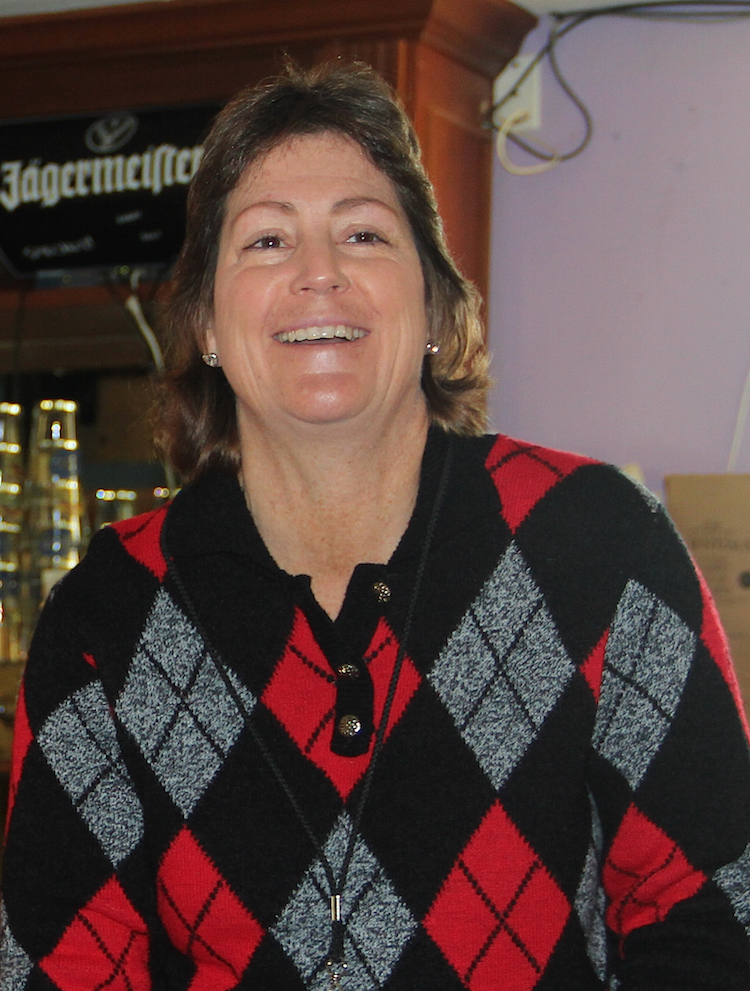 The letter’s dissemination followed Cece’s efforts to oversee a quick response to damage at Terrace East as a result of the MCI fiber optic cable installation project.

The main part of Van Roekens’ email was a commendation from Doug Lambert, manager of Terrace East. Lambert wrote the following:

“Lisa has been a huge help to me through the years whenever the need arises, whether it’s about illegal parking, downed trees, etc. Recently, with the break of the sewer line, and the storm water line directly in front of our building, Lisa has been a godsend as far as communication as to what happened, and the county’s plan, timing wise, on rectifying the problem. I’m confident, with Lisa behind us, that our sidewalk and parking lot, both affected during the break, will be in as good [as] or better shape than before the incident occurred.

“County workers are rarely acknowledged for their efforts, but Lisa continues to go above and beyond for not only us at Terrace East, but for everyone she comes in contact with through her position with the county. Please pass this on to her supervisors. She deserves praise for her continued efforts.”

Plans proposed in the spring to transform the parcel at 5160 Calle Minorga into a private parking lot remain on hold.

On Dec. 5, Jim Ready, a partner with the Sarasota engineering firm of John F. Cavoli, responded, “No, ma’am,” when SNL asked whether he and Cavoli had any update about improvements to the parcel. “Not at this moment,” he added.

As noted in August, the property was on the market for a period of time. A check of county Property Appraiser Office records on Dec. 7 found that a limited liability company called 5160 Calle Minorga still owns the land, which it bought for $450,000 in September 2011. Sentinel Management LLC of Sarasota is the registered agent for the company; the people behind Sentinel Management are Barry Silverstein and Dennis J. McGillicuddy, according to state records.

The conceptual design for the Calle Minorga parking lot, submitted to Sarasota County in late April, showed the potential for 35 spaces on the 0.241 acres.

Bigger news for the Village

In early August, Buccaneer Landscape Management walked off the job, so to speak, in Siesta Village. Since 2014, the firm had been handling all the custodial and landscaping work for which the Siesta Key Village Maintenance Corp. (SKVMC) pays. The money comes from assessments of Village property owners.

Lisa Cece, the special district coordinator for Sarasota County, who oversees the upkeep of the Village, reported to Siesta Key Chamber of Commerce leaders in August that she had secured a firm on a temporary basis while the county’s Procurement Department worked on re-advertising the bid for the maintenance.

As it turned out, the decision was made to take a new approach with the Village upkeep: One bid would be advertised for the custodial work, while a second would cover the landscaping responsibilities. That stemmed from the realization that most companies qualified to do the work did not want to handle all of it, Cece and Michael Shay, manager of the Maintenance Corp., explained.

One other change with the splitting of the contracts, Cece said, is that the bids are low enough that the County Commission does not have to approve the contracts.

In August, Cece told Chamber leaders she was optimistic that a new custodial contract would be in place by Oct. 1. That proved a bit too optimistic, however, given the thorough and methodical processes that take place in the county Procurement Department.

The custodial contract was executed on Nov. 30, county Media Relations Officer Drew Winchester reported. That contract went to Greenscape Enterprises Inc., which does business as Boro Building and Property Maintenance. Boro began work on Dec. 10, Winchester added. It will receive $91,050 for the initial three-year term of the contract; the contract may be renewed for two additional one-year terms.

Among the scope of services Boro is handling are the emptying of all the trash and recycling containers; cleaning of water fountains; “general housekeeping of the gazebo area”; removal of gum, stickers and graffiti; and exterior touch-up painting as needed for the benches, bike racks, water fountains, trash cans and lids.

The bid to which Boro responded was advertised on Aug. 23, the contract says.

The bid for the landscaping work closed on Nov. 22, Winchester noted, but no contract had been awarded by Dec. 11.

While corresponding with Michael Shay about the new Village custodial contract, it took the opportunity to ask whether Florida Power & Light Co. (FPL) ever had managed to get all the streetlights shining again in the vicinity of the Village. A few were affected by Hurricane Irma.

Shay has worked valiantly with an FPL representative in Sarasota to resolve the situation.

On Dec. 11, he reported that the light at the intersection of Ocean Boulevard and Givens Street, which has been out since before Irma arrived, is still out.

A lovely Light Up Siesta Key

Another signature event the Siesta Chamber produces in November is Light Up Siesta Key, formerly Light Up the Village. During the December SKA meeting, Chamber Chair Mark Smith also reported that that event went very well, with attendance estimated between 4,000 and 5,000 for the parade. He called the figure “pretty darn incredible.”

“I’m literally the guy in the back with the sweeper,” Smith explained: He organizes the parade and wraps it up.

During an earlier telephone interview, Smith noted that the parade was only about 10 minutes behind schedule. “I try to get everybody out in time,” he added.

However, the difficulty a big boat had negotiating the turn onto Ocean Boulevard from Beach Road delayed Santa’s appearance, Smith said. “It’s always something.”

During the SKA meeting, Smith commended Bob Kirscher, former co-owner of The Broken Egg restaurant, for serving as Santa Claus again this year. “What an incredible amount of patience that man has,” Smith pointed out. “If you see Bob, thank him.”

As for the SKA’s appearance in the parade: Vice President Catherine Luckner explained that the nonprofit’s participation used to be “a community effort.” Because the fire truck directors rode broke down so regularly, she said, parade-goers would push it along Ocean Boulevard. “Everybody remembers that and laughs.”

The owner of that truck finally sold it, she continued. Last year, the nonprofit’s insurance agent provided it with a fire truck for the parade, Luckner said, but no one was available to drive that truck this year.

Although the SKA had filed an application with the Siesta Chamber to be in the parade, Luckner added, it did not appear that that would work out.

Then on the day of the parade — the Saturday after Thanksgiving — Luckner said she received a call from County Commissioner Alan Maio, who was trying to track down a truck. It turned out that the Sarasota Fire Fighter’s Benevolent Fund was willing to help out, she told the audience.

“Awesome truck; the best we’ve ever had. It purrs.” It also was easy for people to climb aboard, Luckner noted. The vehicle was a 1945 Mack fire truck, she said, “which is a classic.”

The president of the Fire Fighters Benevolent Fund is Paul Kurtz, who works at Fire Station No. 1 in downtown Sarasota, Luckner explained. “I had to give him the shirt off my back to thank him.”

To explain that last remark, Luckner pointed out that she likes to wear an SKA T-shirt over her other clothes, like a tunic. Kurtz, she continued, is “a muscular big guy.” When she asked him what size shirt he wears, he told her he needed a 2X. The SKA had none available, she added. Then she remembered that was the size she was wearing. “I said, ‘There you go!’” and gave him her shirt.

The group did not charge the SKA, she noted, and it plans to provide the truck again in 2018. Luckner extended her appreciation to Maio on behalf of the SKA.