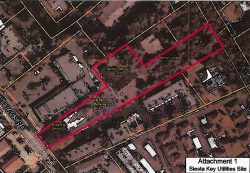 Publishers Note: This property had the promise of adding close to 160 needed parking spots for this part of the Key. With the notation, the east end of the property is wetland and hammock, along with retaining the old SKUA building, the parking spots are now reduced to 50 plus.

Based on comments from Sarasota County commissioners on Oct. 11, the county’s interim director of the Public Works Department raised a few eyebrows with the estimates he provided them for transforming the county parcel at 6647 S. Midnight Pass Road into a parking lot.

The cost of using shell, Spencer Anderson wrote in a memo, would be about $507,000, while asphalt would raise that to approximately $530,000.

With either price, Anderson’s memo pointed out that only 39 new spaces would be created.

With no changes, the memo noted, the site in its current configuration could “accommodate 14 vehicles with minimal cost.”

That parking area, as envisioned by staff, would not include any provisions for a pull-off for the Siesta Key Breeze trolley, a shelter, signage, lighting or security enhancements, the memo pointed out.

Why the half-a-million dollar-plus expense for a lot with just extra 39 parking spaces?

First, Anderson provided details about the size of the parcel, which actually is property of the county’s Public Utilities Department. The Sarasota County Sheriff’s Office has been using part of it as a training area, commissioners have mentioned, but Sheriff Tom Knight has told staff his office no longer will have any interest in the site by the end of this year.

The parcel is about 1.84 acres, Anderson’s memo said, with 60 feet of frontage on Midnight Pass Road; the property is 732 feet deep. The far eastern end abuts Peacock Road, the memo noted.

The front area — with the building the Sheriff’s Office has used — is 315 feet deep, and it is 88 feet wide at the rear. The structure is about 70 feet by 40 feet, the memo said.

If the 39-vehicle lot were created, the memo explained, the Public Utilities Department could continue to use a groundwater tank on the site. That tank is about 100 feet by 100 feet, the memo noted.

The cost estimates for the larger new parking area incorporate a wooden shelter for a trolley stop, a turnaround for the Breeze, LED lighting, wayfinding signs and the preservation of “large trees,” the memo said.

The budget estimates include the standard county project management and internal service charges; design, engineering and permitting work; and construction, in-house inspection of that work and a contingency fee, the memo pointed out.

“Please note that these estimates are for planning level purposes only and subject to [final project details],” the memo concluded.

Another page of the Oct. 5 paid parking options report that the Sarasota County Parks, Recreation and Natural Resources Department staff provided to the County Commission showed a map with 16 parcels staff had researched for possible park-and-ride lot locations to supplement spaces at Siesta Public Beach. The map showing those parcels also noted the county property at 6647 S. Midnight Pass Road and county-owned land on Oakmont Place that will be available after the Siesta Key Wastewater Treatment Plant has been decommissioned.

The potential park-and-ride lots were all within 7 miles of the beach park, the memo pointed out. Staff had found them on the Realtor’s Multiple Listing Service. Most of them were vacant, the memo added.

Of the 16 privately owned parcels, four had been withdrawn from the market after staff began its research, the memo said. Additionally, the time set aside for offers had expired on another four, the memo explained.

Of those still available, the map’s legend said the highest price was $2.8 million for a 0.79-acre lot on Ocean Bouelvard.

The next highest figure was $2.6 million. That was the asking price for both a parcel in downtown Sarasota and one on Central Sarasota Parkway, south of Sarasota Square Mall. The former is 1.68 acres, the map noted, while the other is 1.06 acres.

Staff offered no other details about those properties, though the memo said further investigation would ensue if the board asked staff to take that step. The board did not.