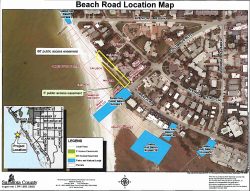 However, the court made it clear that the appeal could be re-filed at a more appropriate time, based on Florida’s rules for litigation. The appeal dealt with one specific count in the amended complaint Mike Cosentino filed against the county in February.

“It had the potential of being great for us,” Cosentino said of the appeal in a Dec. 13 telephone interview. Still, he said, “It’s no big deal, one way or the other.”

Cosentino explained that the appeal was a necessary step in his and his supporters’ fight, which they christened Reopen Beach Road in 2016.

As his attorneys had pointed out to him, Cosentino continued, if the appeal had not been filed, he would have lost his ability to file an appeal of the full case, if he ends up losing in 12th Judicial Circuit Court.

“We basically filed that appeal as a ‘just in case,’” Cosentino said.

In Cosentino’s Nov. 1 Notice of Appeal, his attorneys, Ralf Brookes of Cape Coral and Elizabeth Gomez-Mayo of Winter Park, noted that, according to the Florida Rules of Appellate Procedure, any appeal of a partial final judgment in a case must be undertaken within 30 days of the judge’s rendition of his decision. Twelfth Judicial Circuit Court Judge Frederick Mercurio had issued an Oct. 2 order granting the county’s motion to dismiss Count II of Cosentino’s amended complaint.

However, in a Motion to Dismiss, filed on Nov. 17, Assistant County Attorney David Pearce wrote, “An appeal of a partial final judgment relating to a single count of a multicounty complaint may be taken only if that count constitutes a separate and distinct cause of action that is not interdependent with other pleaded claims.”

In this case, Pearce pointed out, Mercurio already had dismissed Count I of Cosentino’s Second Amended Complaint. (Cosentino did not appeal that action.)

Yet, one issue has yet to be settled in the case, Pearce added:  “Cosentino still seeks a declaration that [a related County Commission action, approving a Coastal Setback Variance] is inconsistent with the Sarasota County Comprehensive Plan.” Pearce continued, “[B]oth the County and the [one set of Intervenors in the case] have pending motions for summary judgment as to this remaining consistency issue.”

“It was kind of a wing and a prayer and a stretch,” Cosentino said of the appeal. “The county’s going to take the opposite tack of any argument we make,” no matter what argument we make.”

On Nov. 7, the appeals court notified the parties in the case that it would accept Cosentino’s challenge of Mercurio’s Oct. 2 order.

That partial summary judgment order focused on Cosentino’s assertion that Sarasota County failed to provide adequate public notice of the County Commission’s 4-1 vote on May 11, 2016 to vacate a 357-foot-long segment of North Beach Road. In the same count of his amended complaint, Cosentino further argued that the Sarasota County Zoning Code requires disclosure of all owners of property involved in a petition for a Coastal Setback Variance. 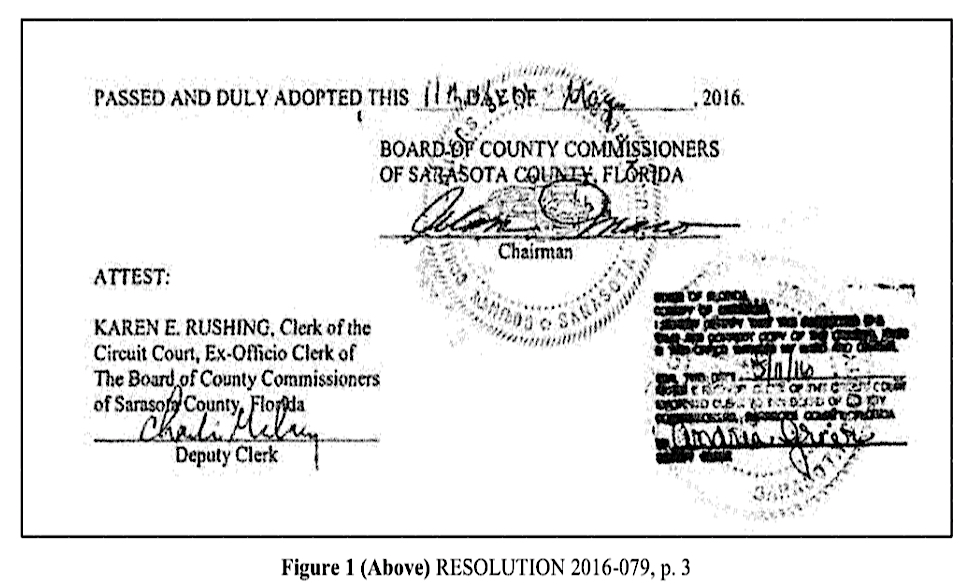 On May 11, 2016, the commission also granted a Coastal Setback Variance to one set of the property owners seeking the road vacation. Dennis and Wendy Madden had applied for the variance so they could tear down 12 dwelling units — some of which date to 1935 — and erect fewer new ones that would meet modern building code standards. Their attorney, Charles D. Bailey III of the Williams Parker firm in Sarasota, pointed out that they needed the unity of title of the vacated road segment in conjunction with property they also owned seaward of the road to have sufficient square footage to comply with zoning regulations regarding the new construction.

Assistant County Attorney Pearce argued during a Sept. 27 hearing on the county’s motion to dismiss Cosentino’s Count II that the county had complied with the statutory requirement for publishing legal notice of the road vacation. He further convinced Mercurio that nothing in the County Code requires full ownership disclosure in regard to a petition for a Coastal Setback Variance.

During his Dec. 13 telephone interview, Cosentino reasserted his belief in the validity of one part of his attorneys’ arguments regarding Count II. He says that his understanding of state law is that the county has 30 days within which to publish a legal notice of adoption of a resolution, stressing the word “adoption.”

The County Commission road vacation resolution was approved on May 11, 2016, Cosentino attorney Brookes told Mercurio in the Sept. 27 hearing, but it was not published until July 2, 2016.

However, Pearce explained to Mercurio that Pearce’s reading of the state law is that a resolution does not become final until it has been rendered and filed with the Clerk of the Circuit Court. In this case, Perce continued, the commissioners sought an extra 5-foot wide pedestrian easement from the vacated road segment across private property seaward of the road, as extra insurance that the public would continue to be able to access the beach. The petitioners had agreed to add that as a stipulation.

It took time to get the legal description written and incorporated into the resolution approving the road vacation, Pearce told Mercurio. Nonetheless, because the resolution was rendered and filed with the Clerk of Court’s Office on June 27, and it was published in the Sarasota Herald-Tribune on July 2, Pearce said, the county still met the 30-day statutory deadline.