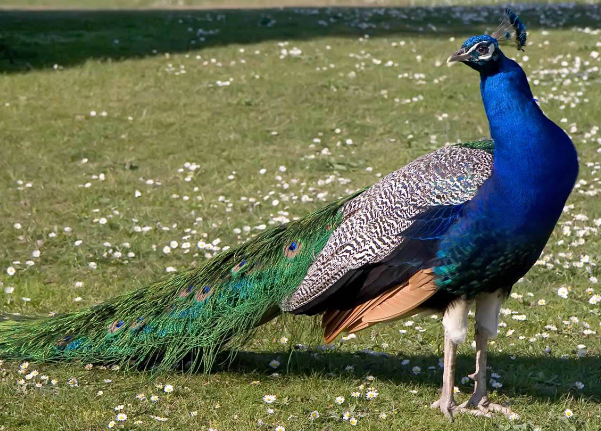 Residents on the key are upset with the shrill, raucous sounds of peacocks making their mating sounds and with the tourists who are drawn to the (admittedly beautiful) plumage of the male peafowl – the peacocks. So what do they do? They want to do away with the females, the peahens. Isn’t that just typical.

If you’ve been following the controversy about these dirty birds (excuse me, but if 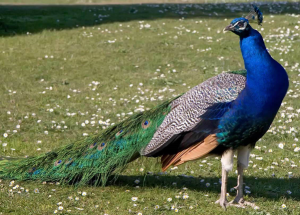 they do their business on your front porch, you have a right to call them dirty) you will know why people living in Longbeach Village are upset. Too many birds mean too much fertilizer dumped in the wrong place, too much noise when you are trying to take a nap while watching reruns of Little House On The Prairie, too much click-clacking on your roof so that you think your spouse’s dentures are misaligned, too many off-key tourists taking photos of Mother Nature’s pride – a pride of peacocks. But this is an old story, one which the Village has been trying to finish for years. Turns out this short story has morphed into a serial running longer than one by Charles Dickens.

The Village has tried to reduce the wandering flock of peafowl numerous times and has paid invoices to prove it. Well, they’re at it again. Now they are enlisting the aid of the Town of Longboat Key, and the idea is to kill…. well, “to kill” is kind of harsh, let’s just say …..“to remove” or “trap” all of the peahens in Longboat Village. At a recent Longboat Key Town meeting Village resident Kip O’Neill said “They all have to go.” The Town, perhaps to appear politically correct, countered and suggested reducing the number of peacocks down to twelve.

No one is exactly sure how they arrived at the number 12 for the males that would be allowed to remain. If just a few peahens are inadvertently left they will be found. Not by the “trappers” hired by the Village, but by one or all twelve of the peacocks. If the commission would leave all of the peacocks un-trapped any remaining peahens would die of exhaustion and the Village would save on the cost of trapping the peacocks.

They probably settled on twelve so they wouldn’t be accused of peafowlocide. But with 12 lonely peacocks wandering around looking for mates there will be lots of squawking, resulting in lots of frustration – on the part of the peacocks. That frustration will draw the ire of PETA which will descend on Longboat Village like a lot of angry ….. peahens. And they will be worse than all those tourists with cameras.

Town Manager Dave Bullock will seek bids from trappers to reduce 150 peafowl down to that magic number 12. In the Fall we’ll see if the incoming bids will be equal to, or higher than, the $10,000 that the town estimates. Some time later we will see the next installment of The NeverEnding Story.

Leash me alone Longboat Key Town Attorney Maggie Mooney-Portale recently tried to relax the town’s leash law because…….? She said at a LBK Town Commission meeting that she was modifying the current law’s language to make it comparable to the regulations of Sarasota and Manatee counties.

Well, the town commission wasn’t having any of that. Commissioner Pat Zunz said, “It’s absurd” and other commissioners agreed. BUT, rather than leave the existing leash law alone, the commission had to tweak it. Why, to not seem as if they were totally rejecting Ms. Mooney-Portale’s suggestion? They approved language that will read: “….must have physical control of such animals at all times, i.e. leash or other tangible physical constraint.” If an owner, whose dog jumps out of his/her arms, says “I was holding it tightly, really physically constraining it” are they off the hook when it bites one of Longboat Village’s treasured peahens? Or do they get paid $75 for helping to “remove” one of the peafowl?

All of this on the heels of a similar change made in February. Because most owners of Longboat Key’s cats and dogs don’t have licenses for them, the commission voted to eliminate the license requirement that had been there for as long as people could remember. Or, apparently, not remember. Perhaps the commission, in this instance, was just trying to be fair to snowbirds that had licensed their pets in states to our north. There is nothing worse than double taxation.

How to increase LBK revenue and/or employment We are always trying to do the right thing, but doing something always has consequences. Leave the beach furniture down near the water and kill (probably not) a turtle hatchling, or take the trouble to bring it further back out of the way (what, every day during turtle season, give me a break)? Decisions, decisions, decisions. There is a voluntary ordinance (if it’s voluntary it isn’t an order, is it?) requiring chairs and equipment to be pulled back each night to avoid trapping turtles but, for some strange reason, “voluntary” doesn’t work. As a result Longboat Key Commissioner Lynn Larson wrote Town Manager Dave Bullock “…we must mandate compliance with a stronger ordinance requiring nightly removal of these obstacles.” This may be added to a future workshop agenda. ++

Perhaps if these “lost” items were collected by the town and the owners were permitted to retrieve them after paying a storage charge, the question for those owners might be “Should I leave them near the water or should I pay someone to move them up each night and then back in the morning?”