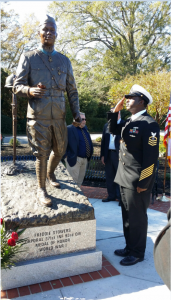 The long way home
Many people come to live here or to spend the winter months along the Gulf Coast of Florida, but few pass through on the way from one place to another. Last month one person did as part of a ninety-seven year journey home. Yes, he was born a long time ago, one hundred and nineteen years ago to be precise, back in 1896. And he died in France in 1918 but came to Sarasota to be re-born before continuing on his journey.

Freddie Stowers, the grandson of a slave, was born in South Carolina and, at the age of 21, was drafted into the US Army during World War I, serving in the 93rd Infantry Division (Colored). Because of the institutional racism of that time, colored units were placed under French command so that white American officers would not have to consort with black soldiers. During an assault on Hill 188 in the Ardennes region of France, his platoon was decimated by German machine gun fire. Corporal Stowers, a squad leader, took command of the battered and demoralized platoon and successfully led it to take multiple German positions. He died while doing so. He is buried, along with 133 fellow soldiers, east of the village of Romagne-sous-Montfaucon.

After his death Corporal Stowers was recommended for the Congressional Medal of Honor but his recommendation was not processed at that time as it had been “misplaced”. In April of 1991 his surviving sisters finally received the medal at the White House. As a tribute to his valor, renowned South Carolina artist Maria Kirby-Smith was recently commissioned to create a sculpture of Corporal Stowers. She did so and the completed work was cast at the Bronzart Foundry on Ashton Court, in Sarasota. The Bronzart Foundry, while casting sculptures the likes of Robert Rauschenberg and Jack Dowd, has done a number of works by Ms. Kirby-Smith.

After his re-birth, the stature of Corporal Stowers took a slow route out of Sarasota on a flatbed truck: over the Ringling Bridge, up the length of Gulf of Mexico Drive on Longboat Key, and back onto the mainland via the Cortez Bridge. Ms. Kirby-Smith said, “After his long journey, he deserved to see a bit of beauty on his way home.” The dedication of the statue took place on November 11th on the campus of Anderson University in South Carolina.

Trump Mayor of Bradenton Beach
Yes, Bill Shearon can be called the “Trump Mayor” of Bradenton Beach, as that is how he became mayor – again. A strange story, indeed. Mr. Shearon had been elected, in the normal fashion, four years ago but the Vice-Mayor, Jack Clarke took exception to Bill Shearon’s style and tried to have him removed from office. After that failed Vice-Mayor Clarke called for a recall election and that way finally succeeded in ousting Shearon and getting himself elected to the then vacant office. All this just 6 months before the next regular election.

In the new election just completed, the two adversaries tied at 195 votes each, forcing a state sanctioned tie-breaker. Rather than flip a coin, toss the dice or have a duel in the sun, they chose to see who could pick the highest card from a new deck. Jack Clarke picked the 10 of Clubs – a good pick. However Bill Shearon picked the Ace of Clubs, trumping Clarke and again becoming mayor. At least Clarke can’t accuse Shearon of cheating by reading a marked deck, as Shearon is legally blind.

Flashing in public to become legal on Longboat Key
Public safety is on everyone’s wish list and Longboat Key is going to have a safer Christmas this year. The Florida Department of Transportation has begun constructing four crosswalks along Gulf of Mexico Drive. Pedestrians wishing to cross this thoroughfare will simply press a button to set off flashing lights, alerting motorists that they must slow down or stop. Two of the crosswalks will be at the north end of the key at both ends of the Centre shops. The other two will be at the south end – at Bay Isles Road and at the northern entrance to Longboat Club Road. So, if you see someone flashing you on Gulf of Mexico Drive feel free to slow down – or even stop.

They just keep coming
The snowbirds are coming and some are already here, but we are referring to something even more important. Yes, the awards that make the snowbirds want to flock to our beaches (and restaurants, real estate offices and shops). Condé Nast Traveler magazine has picked Longboat Key as the 9th most attractive island in the United States. Not bad for a sand pile that nature wants to move south towards Key West. It is said that you are known by the company you keep. LBK is in very good company with the top four on the list being Maui, Kauai, Oahu and Hawaii. A glance at a photo of each island on the list shows that they are all beautiful. Of course only one of these islands is near Sarasota so that really should move it up a few notches.

Remember the Air Force and the $600 toilet seat and the $100 hammer?
Longboat Key residents have just voted to bury $25,250,000 along Gulf of Mexico Drive with residents paying off a bond issue for that amount over the next 30 years. This is the cost to put all the phone and power cables underground in an attempt to beautify that stretch of the gulf. While one might not think power poles are that unattractive, the new concrete ones proposed by Florida Power & Light are “tall and thick and ugly” rather than “tall and tan and lovely” so there was no way that residents of Longboat would accept them. Divide that amount of money by the length of the roadway and it comes to $478 per foot.