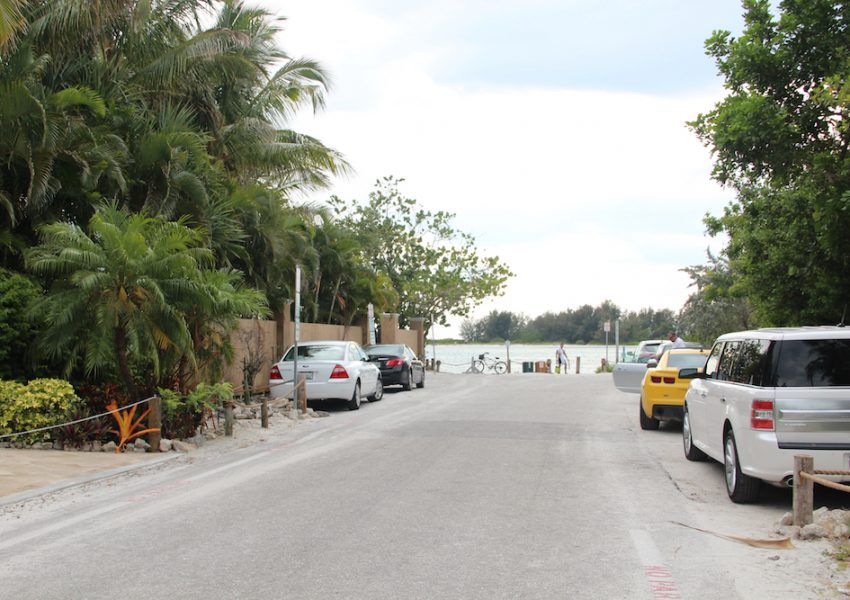 On April 9, 2014, the Sarasota County Commission voted 3-2 to approve a plan for 16 public parking spaces on North Shell Road, to enhance public enjoyment of Beach Access 1.

Spots were to be carved out on both sides of the road, the board agreed.

During the public hearing that day, a Solymar resident, Paul Eklund, complained about cars parked all over the road during the height of tourist season. He counted 44 on March 1 and 42 on April 6, he told the commissioners, adding, “And these are not unusual numbers.”

Almost five-and-a-half years later, a couple living on North Shell Road — with support from six of their neighbors — formally will ask the county’s Traffic Advisory Council to eliminate many of the 16 spots. Greg and Michelle Olson cite not only illegal parking issues but also alleged offenses such as drug use, excessive drinking, and drinking and driving among visitors to Shell Beach at Access 1.

Their petition was scheduled to have been heard on June 3; however, a lack of quorum that day has pushed back the hearing to Sept. 9, county spokeswoman Brianne Grant told SNL.

Once, people could drive along a stretch of Shell Road, enjoying the vistas of Big Pass and the Gulf of Mexico. An October 1978 article by Anne Johnson in the Siesta Key Pelican said Shell Road was “[c]onsidered by many the most scenic view on Siesta Key.” A person started that drive on the segment that leads these days to Beach Access 1. From there, the road formed a rough U-shape, eventually rejoining Higel about half-a-mile south, Johnson wrote.

Yet, homeowner complaints resulting from storm damage to part of the road and a subsequent County Commission vote to vacate the affected area left Beach Access 1 as the sole remnant of water access for the public on Shell Road.

Almost exactly four years after the County Commission approved the 16 parking spaces on North Shell Road, a new pair of residents began complaining at a Siesta Key Association meeting (SKA) about dogs on the beach at Access 1.

The woman in the couple told then-Sgt. Jason Mruczek, the Sheriff’s Office substation leader, that people had turned Access 1 into a “dog beach,” in spite of the county ordinance prohibiting dogs on the public beach.

“We’re left with the trash and the urine, and it’s really getting out of hand,” the woman told Mruczek.

Additionally, she said, parking has “gotten out of hand at night.”

When Mruczek asked whether she meant people were remaining in the area after 9 p.m., she replied, “Oh, yeah. Yeah. I’ve got you guys on speed dial.”

Both the woman and the man with her declined to identify themselves to SNL, citing concerns about backlash for their comments.

At the next SKA meeting, in May 2018, Mruczek reported that he believed the Sheriff’s Office “had a lot of success with enforcement” on North Shell Road.

Eight months later, though, the residents of N. Shell Road — Greg and Michelle Olson — filed an application with the Sarasota County Traffic Advisory Council (TAC), requesting the removal of all the parking spaces on both sides of the road between their house and Higel Avenue.

The TAC advises the County Commission and makes recommendations “on matters pertaining to traffic, parking, speed regulations, safety, and the placing of traffic control devices within unincorporated Sarasota County,” its webpage says

Generally, the County Commission takes final action on petitions to the TAC.

Details about their request

In their Jan. 24 petition to the TAC, the Olsons included multiple reasons for seeking the parking space reduction on North Shell Road. Many of their points reprised issues raised at the April 2018 SKA meeting.

Foremost, however, they wrote, has been consistent difficulty “entering and exiting our driveway due to cars repeatedly parking beyond the [‘No Parking’] areas of the cul-de-sac …”

That is “of grave concern,” they stressed, because Greg Olson has health issues. In fact, they continued, their driveway was blocked once when they needed to go to the emergency room. They cited that situation as the impetus for their decision to petition the TAC.

As for the alleged drug and alcohol incidents: The couple wrote that they and their neighbors “fear for our safety. The team of Sheriffs that respond to our constant calls are … incredibly supportive,” the couple continued. Nonetheless, the Sheriff’s Office does not have sufficient staffing to be able to “dedicate an officer 24/7 to Shell Beach,” they added.”

To support their allegations, they pointed out that they and their neighbors “continually find illegal drug paraphernalia (crack pipes, bongs, etc.) all along the street.”

In addition,” they wrote, “we have patrons [of the beach access] who regularly urinate and defecate alongside their parked cars in the aforementioned spaces. We have beer cans tossed over our privacy wall daily

several neighbors have documented vandalism at their homes which was the result of constant attempts to trespass (jump our privacy walls), again by high and intoxicated individuals.”

Further, they cited “a blatant disregard for the posted beach hours” prohibiting people with vehicles in the area between 9 p.m. and 6 a.m. daily.

Then they noted that Access 1 has “become known as the ‘dog beach.’”

“This regularly causes a health hazard,” they wrote, as the dogs “urinate and defecate, without their owners properly removing the pet waste …”

The Olsons concluded their email, “We are hopeful that you would give thoughtful consideration to our request. … We trust that this is not how you would want a beach within your jurisdiction to be operating.”