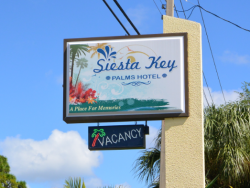 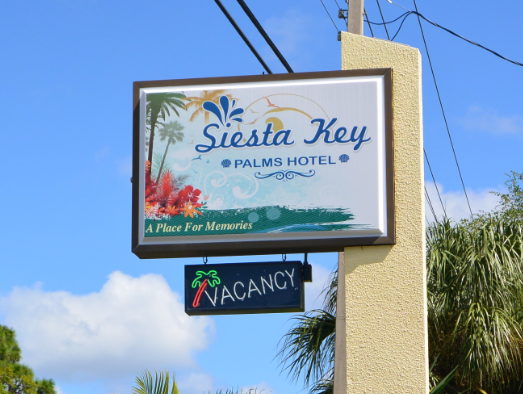 After winning plaudits from the neighbors and from Sarasota County Planning Commission members, a proposal to redevelop an old hotel property on Stickney Point Road near Siesta Key will undergo final review by the County Commission.

With a unanimous vote on April 5, the Planning Commission recommended the County Commission first approve the addition of a new zoning district — Boutique Resort Redevelopment/Planned Development (BRR/PD) — and then the rezoning of an acre of property between Stickney Point Road and Dawn Street, so the owner can redevelop the historic Siesta Key Palms Hotel at 1802 Stickney Point Road.

Sarasota developer Henry Rodriguez explained to the Planning Commission on April 5 that he bought the property in 2016. He has become familiar, he said, with “a trend throughout the travel industry [that] encourages rehabilitation of old … hotels into chic, mid-century … experiences.”

The travel industry is going through a bit of an evolution, he continued, moving away from brands such as Marriott and Holiday Inn. His hotel, he added, “provides an “Old Florida experience.”

Since he has been renovating the property, Rodriguez said, it has been winning rave reviews on internet sites. In fact, he added, those comments “have been just phenomenal.”

However, he told the commissioners, when he broached the idea of making further changes to the property, given the existing zoning of the site as Office, Professional and Institutional (OPI) and Residential Multi-Family (RMF) 4, he found no way to proceed with the vision he had. “To my amazement,” he said, the only option was to use the RMF zoning to build a new structure that would be about 110 feet high — 85 feet over parking — and that was not desirable. “I wanted to keep the integrity of the Old Florida experience.”

The structures date to the 1950s, Robert “Bo” Medred of Genesis Planning & Development in Bradenton — who has worked on the project on behalf of Rodriguez — told the Planning Commission. “These had gone into a rundown condition.”

“Henry has developed a relationship with the neighbors,” Medred noted, with a number of them having provided letters of support for the redevelopment. “They love what he has done” with the landscaping and hotel units on Dawson Street since he bought the property, Medred added.

Three of those neighbors who addressed the board during the public hearing praised Rodriguez. “It was a dead property that he brought back to life,” said Bob Spinelli, speaking on behalf of the adjacent Key Point Village Condominium Association. Key Point Village is located at 1754 Stickney Point Road.

Judith Winslow, who has lived in the neighborhood for 20 years, she said, found the property “quite undesirable” before Rodriguez bought it. “He’s not looking to over-develop,” she told the Planning Commission. “He’s looking to truly revitalize [it] and be a value add in the area, which very few developers have in mind these days.

Trying to find the best approach

County staff had worked with him and Medred on a proposal to modify a zoning district known as Tourist Resort that was made inactive during a 2003 Zoning Ordinance revision, Rodriguez said. With new the BRR/PD zoning district, he added, he would be able to keep the atmosphere of the hotel and enlarge it without any high-rise structures.

As Medred explained it to the board, he and county zoning staff incorporated elements from the Tourist Resort district into the new BRR/PD, making the requirements so narrow that they would apply only to specific older properties on the mainland. The zoning could not be used on any of the barrier islands, Medred stressed. It would allow no more than 75 rooms and no height above 35 feet in the redevelopment of older resort properties.

The staff report prepared for the Planning Commission meeting explained that, in searching the records of the Sarasota County Property Appraiser’s Office, staff found 62 properties being used as hotels, motels or other lodging with no more than 40 units. Of those, 54 were either in jurisdictions outside county control or on the barrier islands. Thus, the report said, only eight properties are eligible for rezoning to the BRR/PD district.

County Planner Kirk Crane, who made the staff presentation to the Planning Commission, explained that the property has six multi-family units and eight hotel/motel units on adjoining properties between Stickney Point Road and Dawn Street, near Siesta Key. Rodriguez owns a hotel adjacent to the site, Crane noted, but that was not a factor in the issues before the board that night.

Rodriguez plans to construct one new, three-story building, Crane said, which would be located at the intersection of Avenue B and Dawn Street. Eventually, Crane pointed out, plans call for the demolition of the two-story building on the property so a new pool and spa area can be constructed in that space.

The total number of units in the redeveloped hotel would be 30, he said, and the parking area would be expanded to include 30 spaces.

Further, Crane pointed out, Rodriguez plans to extend the existing 6-foot fence that separates the property from Stickney Point Road. It would go all the way down to the Avenue B and C intersection, Crane said.

One of the stipulations Rodriguez has agreed to as part of the binding site plan, Crane added, is the donation of the space needed for a new Sarasota County Area Transit (SCAT) bus stop that will be compliant with the Americans with Disabilities Act.

Medred also noted that the five current access points to the property would be closed, with a new entrance from Stickney Point Road at Avenue B. As part of that process, he continued, Rodriguez had agreed to a staff stipulation calling for the widening of Avenue B in that area to the standard street width, along with the repaving of that part of the road.