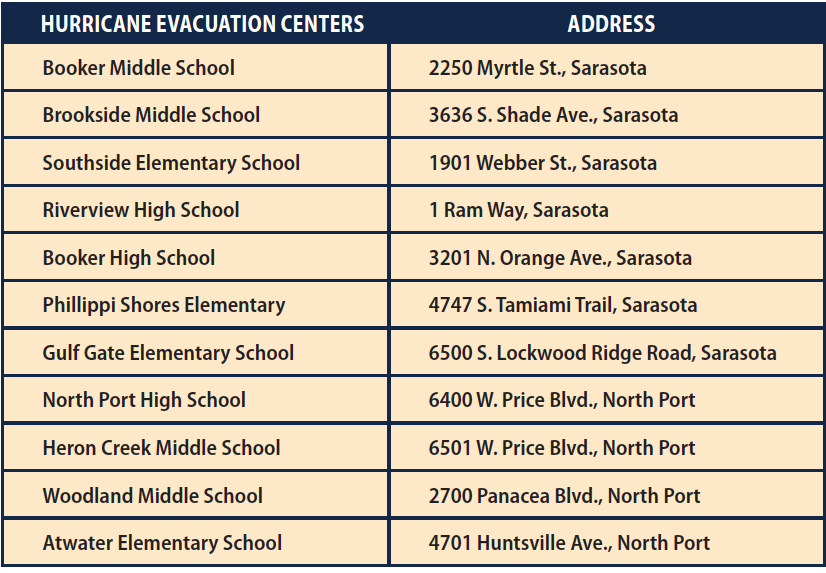 Along with significant changes in how Sarasota County will order evacuations in advance of an approaching hurricane, staff also has established a list of 17 “rally points” to aid people who cannot drive themselves to an evacuation center.

“We discovered that a lot of people don’t drive anymore,” McCrane pointed out as he discussed the county’s response to Hurricane Irma in September 2017. Many older residents, especially, who live well away from designated evacuation centers, he said, need some means of reaching those places.

As a result, McCrane continued, staff has created a series of rally points where people will be able to leave their vehicles and catch a ride to a center. Emergency Services staff has worked with Sarasota County Area Transit (SCAT) and the Sarasota County School District to implement this new system, McCrane explained.

Those who cannot drive at all will be picked up and transported to the evacuation centers, he pointed out.

After the emergency is over and people are ready to return to their homes, he said, those who needed the rides will be returned to the rally points or to their homes.

Members of the public will be able to register in advance if they do not drive or feel they will need help, McCrane added.

The Sarasota County Government website (www.scgov.net) has details about the new transportation plan on its Emergency Management webpages. A menu on the left side of the pages includes the link, “Transportation Plan (Hurricane Evacuation Centers).”

The transportation plan lists rally points from Englewood to Longboat Key. One of them will be Siesta Public Beach.

Collins explained during the May SKA meeting that Sarasota County is among the few counties in Florida that have undertaken engineering studies to determine the safest buildings among their schools to use as centers.

(McCrane stressed that staff no longer will use the term “shelter.”)

The registration form, the page notes, “will include guidance for those who cannot drive or walk to a designated rally point.” It also explains, “Rally points may change depending on the severity of a storm. Residents who pre-register will receive an automated telephone message with information about the location of rally points and when they will be picked up.”

The webpage further notes that the online registration process will cease when landfall of a hurricane is expected within 60 hours.

Additionally, the webpage reminds the public that space on the buses will be limited, so no one will be allowed more than “two carry-on sized bags” that can be stored under a seat or held in a lap.

Evacuation levels instead of zones

During the period when Irma was expected to strike, Collins told the approximately 40 SKA members in attendance on May 3, the county and the Sarasota County School District had about 20,000 people and about 2,200 pets spread among its shelters. People with special needs because of health conditions were in three shelters, he added.

Following Irma’s strike, Collins said, the County Commission agreed to staff’s proposal for an in-depth “after action” report to determine what went well among all the plans and operations and what needed tweaking.

McCrane then talked of the changes being implemented in regard to evacuation centers. In the past, he pointed out, the county used zones — with A including all the barrier islands — to alert people if they should leave in advance of a storm. However, he said, one problem staff encountered during Irma was a misunderstanding on the part of mobile home residents. Some thought that if they were in Zone C — well away from the shoreline — they did not need to evacuate. As a result McCrane said, the county will use evacuation levels, and it will provide more details about who should evacuate. For example, he said, a Level A evacuation would mean all persons living on the barrier islands, as well as those in mobile homes and in the county’s lowest-lying areas, would need to seek another place to ride out the storm.

Emergency Services staff will use street grids, too, when at all possible, McCrane noted, to try to make it clearer to the public about the areas that should be evacuated.

Additionally, McCrane continued, staff no longer will reference “mandatory” or “voluntary” evacuations. Instead, staff will say, for example, “We are evacuating Level A …”

McCrane also stressed that the evacuation centers are designed to house people for 24 to 48 hours. Everyone planning to go to a center should bring his or her own bedding and personal items to occupy the time, he pointed out. “They’re very, very rough conditions.”

Additionally, he emphasized, not all of the centers will have generators. Staff will explain what procedures will be followed if the power is lost, he said, adding the suggestion that people include flashlights among the materials they take with them.

All centers will be pet-friendly, he continued.

McCrane also advised the SKA audience members that if they have friends who live outside Florida who visit them during season, they should consider “returning the favor” and asking to stay with those friends if a hurricane is approaching the state.

Moreover, he said, people who are not in evacuation areas who live in newer homes constructed to meet up-to-date building code standards, with storm shutters and plenty of supplies, should consider staying at home.

McCrane stressed that people who live in areas designated for evacuation should leave. “Don’t ride it out,” he said of an approaching storm.