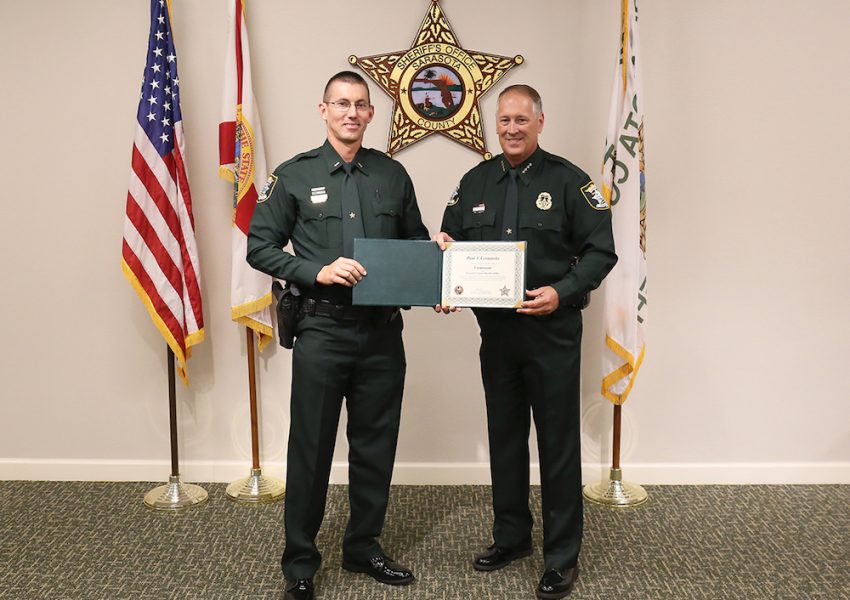 Last October, newly promoted Lt. Jason Mruczek told reported that he would be leaving Siesta Key, where he had served as the Sheriff’s Office substation leader for a number of years. Sgt. Paul Cernansky, who previously served with the department’s Tactical Unit, would be taking his place, Mruczek added.

As it turns out, Cernansky also has received a promotion to lieutenant. That meant that he, too, would be moving to another assignment. In Mruczek’s case, it was a position with Animal Services. In Cernansky’s case, it is the Law Enforcement Division, the Sheriff’s Office announced on April 18, after Cernansky’s promotion became official.

Cernansky first addressed SKA members during their regular meeting in November 2018. Then, Deputy Chris McGregor, a long-time officer on the island, had the honor of making the introduction. McGregor and Cernansky laughed about the fact that Cernansky had ended up having to use one of McGregor’s uniform shirts that day, which, obviously, misidentified Cernansky, just as he was trying to get acquainted with the nonprofit’s board and members.

On April 4, a deputy who was one of Cernansky’s colleagues with the Tactical Unit during Cernansky’s five-year stint with that division — Zack Lewis — accompanied Cernansky to the Siesta Key Association meeting.

Cernansky joked that Lewis has complained that Cernansky never has anything good to say about him.

Lewis began working on the Key a couple of months ago, Cernansky continued. “Zack is one of the most talented, if not the most talented cop I’ve ever worked with,” Cernansky said. “You guys are all very fortunate to have him out here.”

The Sheriff’s Office website says, “[The] Tactical Unit functions as part of patrol and is tasked with the identification, disruption and displacement of prolific offenders throughout the county. The Unit works closely with the Special Investigations and Criminal Investigations Sections, the Intelligence Unit, Fugitive Apprehension Unit and other local, state and federal agencies. The Tactical Unit also augments patrol by focusing on especially problematic areas, conducting surveillance and apprehending offenders where necessary to reduce the incidence of crime.”

As of the Siesta Sand publication date for this issue, no word was available on who the new Siesta substation leader will be.