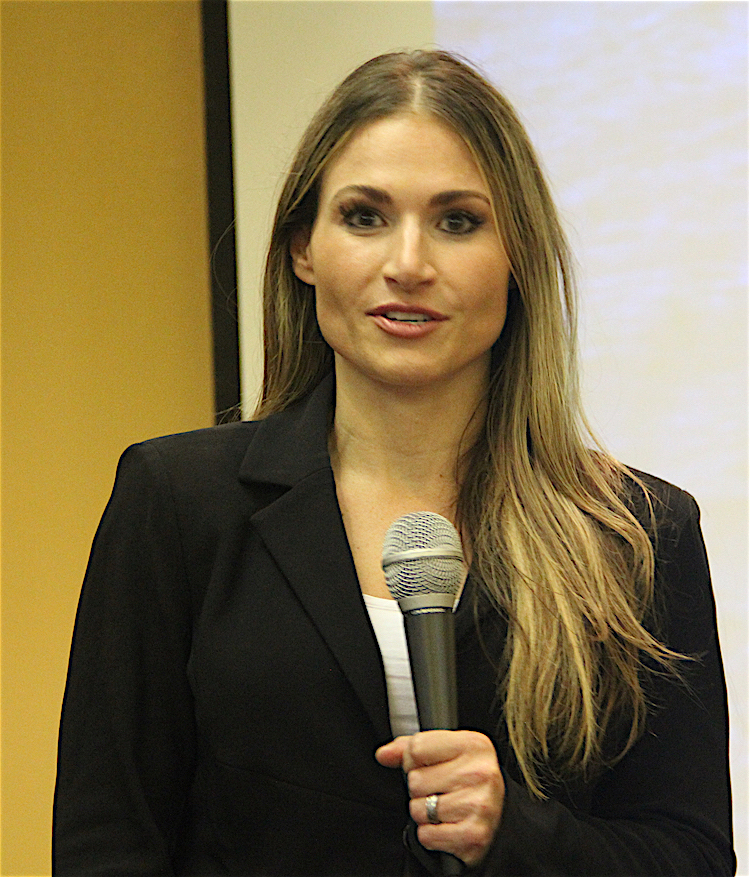 Researchers have been waiting for this red tide bloom — which actually began in October 2017 — either to be disrupted by a weather event or to run out of nutrients or otherwise come to the end of its lifecycle, Tracy Fanara, Mote Marine Laboratory’s Environmental Health Program manager, told Siesta Key Association (SKA) members on Sept. 6.

The offshore winds that were prevailing prior to Tropical Storm Gordon’s development could have helped the bloom disperse, Fanara explained. “Our cell counts have been low throughout Sarasota County for the past two weeks.”

Fanara emphasized that nitrogen is the big feeder for red tide. Although audience members asked whether phosphorous has had an impact on this long-lived bloom, Fanara explained that excess phosphorous can cause the freshwater algae blooms that also have been in the news, as a result of the U.S. Army Corps of Engineers’ release of water from Lake Okeechobee.

“When it comes to red tide,” she said, “we’re more concerned with nitrogen, [which] is coming from natural processes,” such as decaying wildlife and excrement, “but also from fertilizer.” She told the audience that researchers have put their focus on determining the sources of all the nitrogen.

“In Florida, we have a lot of problems,” Fanara noted. Because of all the development, she explained, instead of rainfall sinking into the ground, it flows across asphalt and concrete, picking up pollutants before it flows into bodies of water. That leads to algae blooms, Fanara pointed out.

Additionally, climate change is raising the minimum temperature of the Gulf of Mexico faster than it is increasing the maximum temperature in the Gulf, she said. “Karenia brevis is happiest,” she pointed out, when the water temperature is between 60 and 86 degrees. “Well, we used to hit 60 degrees,” she noted; “we’re slowly creeping up with climate change. Therefore, the warming Gulf could be one reason the current red tide bloom has lasted so long.

Another possibility, she said, is that Hurricane Irma — which struck Florida on Sept. 10, 2017 — could have stirred up a big supply of nutrients for Karenia brevis, feeding the bloom.

“It could be a combination,” she said of climate change and the hurricane. “It could be one or the other. … These are all hypotheses. However, we have enough data for me to say that out loud.”

In response to audience questions, Fanara explained that the algae blocks pathways for sodium uptake. Essentially, she said, it suffocates organisms.

Mote Marine Laboratory has received the results of the necropsies performed on the first groups of turtles and dolphins whose deaths were suspected to have been caused by Karenia brevis, Fanara noted. The wildlife had “very high levels” of the toxin from red tide, she said. “Most of it was from ingesting the toxin.”

Anecdotal reports indicate red tide has been around at least since the 1500s, she pointed out. Officially, it has been documented since the 1800s.

As scientists work to learn more about how it thrives and what might be able to control it, Fanara said, the best anyone can do is to alert the public to current conditions. Mote’s Beach Conditions Reporting System (BCRS) was developed by her predecessor in 2006, she noted. That system provides a lot of information to the public. To access it, she told the audience, just go online to www.visitbeaches.org.

Furthermore, Fanara continued, the University of South Florida issues forecasts for water currents for the next 3.5 days. Those projections, plus weather predictions for wind, have led to five-day forecasts for respiratory conditions. “We are making big strides, and citizen science is a big reason for that,” she added.

In response to audience members’ concerns about the number of deceased fish and wildlife, Fanara talked about Richard Pierce, senior scientist and associate vice president for research at Mote, who has been undertaking research into red tide for many years. He has found that shrimp and clams “grow really, really rapidly,” she pointed out, after a bloom subsides.

She also discussed her idea about the potential of using clam and oyster beds to try to keep red tide blooms from becoming so toxic. Such “filter feeders,” she said, accumulate the toxin “and take it out of the water column.”

She worked briefly this year with a fellow researcher in Key West, Fanara continued, who was looking into use of “living docks” to remove detritus from the water. She described that method as providing structures to which the filter feeders could attach. However, she said, the experiment did not work because the levels of the red tide toxin were too high.

When she and the Key West researcher took preliminary samples, she explained, they found cell counts of 30 million to 40 million per liter. “One million cells per liter is high,” she emphasized. “So [the red tide] killed almost everything in our living dock.”

They will have to wait until this bloom ends, Fanara said, before they can try again. People already have volunteered to put out living docks, she added.

When asked what other creatures eat Karenia brevis, Fanara said scientists are studying parasites. “We’re looking at how we can use the natural ecosystem” to control the red tide blooms.