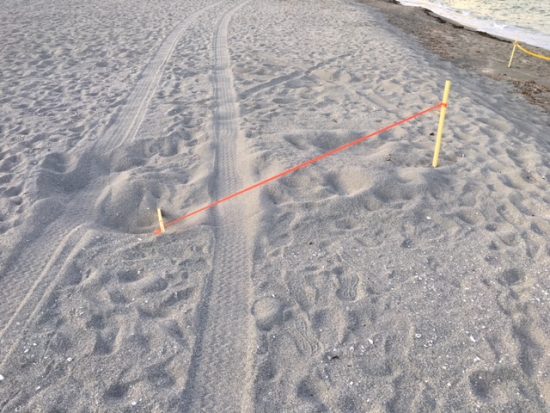 The Florida Wildlife Conservation Commission (FWC) and Mote Marine Laboratory are asking the public for help in determining who drove over eight sea turtle nests near Turtle Beach on Siesta Key on June 22, including a newly laid, unmarked nest.

Anyone with information about the incident is asked to call FWC’s wildlife alert hotline at 888-404-FWCC (3922).

“Upon Mote’s initial inspection, there was no obvious damage to eggs,” a Mote news release said, “but it is difficult to assess the damage done to each nest without disturbing the nest further.” Thus, Mote scientists may not know the potential impacts on each nest until they hatch, the release added.

“Sea turtles are protected under federal and state laws as well as local ordinances,” the Mote release emphasized. “Harming sea turtles, their nests or eggs is illegal and can result in serious fines or even jail time,” it added.

“We are disappointed to see this kind of destruction — especially to know that it likely took place at night, when the perpetrators could have easily driven over hatchlings or hit a nesting sea turtle,” said Coquina Homer, a Mote biological technician, in the release. “We go to a lot of effort to protect sea turtles, which are threatened species. We hope that members of the public learn from this incident and help to ensure that it doesn’t happen again.”

Homer reported the incident to the Sarasota County Sheriff’s Office on the morning of June 22. The Mote news release said that a small vehicle dislodged the stakes around the seven nests that had been discovered prior to the incident.

The Sheriff’s Office report noted that the vehicle that drove over the nests started its path at Turtle Beach Park and returned there.

“Mote’s Sea Turtle Patrol found the damage and tracks from a golf cart or all-terrain vehicle (ATV),” the Mote release pointed out.

“FWC officers conducted an initial investigation,” the release explained, but it was inconclusive because so little additional evidence was found.

Brian Norris an FWC officer who handles public information requests for the agency, said in a July 11 email, “Unfortunately, we have not received any additional information or tips that may help us further this case.”

In an earlier telephone interview, he said it was difficult to determine with certainty the type of vehicle that was involved. Golf carts and ATVs use similar types of tires, he noted.