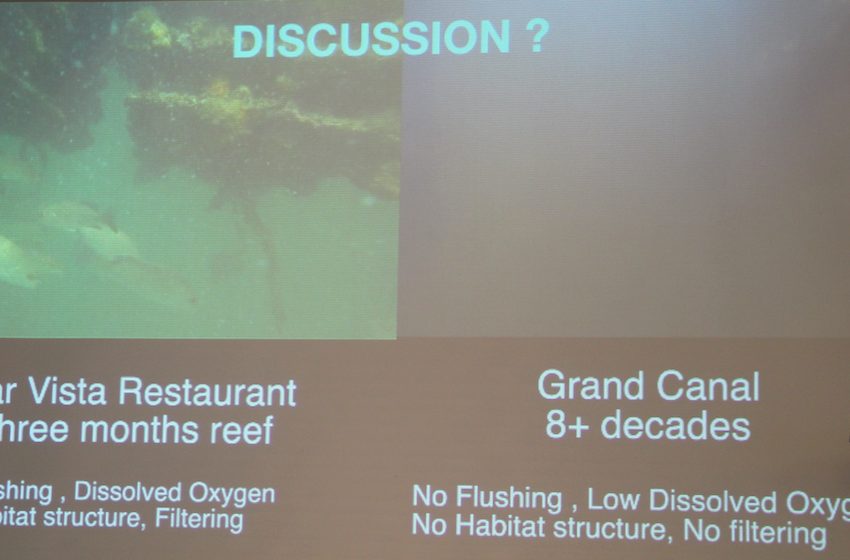 The Sarasota Bay Fisheries Forum is working on a number of ideas to improve the degraded quality of Siesta Key’s Grand Canal so the water once again will support an abundance of fish.

A member of the forum, Phil Chiocchio of Sarasota, especially is advocating for the use of “mini reefs” under docks along the canal, which he says would filter out pollutants.

In May, three mini reefs were installed under the dock at the Mar Vista Dockside Restaurant on Longboat Key, he told about 30 members of the Siesta Key Association (SKA) during their October meeting. In the ensuing months, he pointed out, crabs have been hiding their offspring in the reefs, and mangrove snapper are coming into the area, in turn, drawing dolphins that feed on the fish. He showed the SKA members a video of fish swimming around the mini reefs.

“We’re going back in November to do our next follow-up to see how this is working,” Chiocchio added.

In the meantime, he said, the forum members plan to install 10 mini reefs at the Holmes Beach Pier.

In introducing Chiocchio, SKA President Catherine Luckner said he has been a program content creator for the University of Florida’s Center for Aquatic and Invasive Plants since 1986, having made more than 800 scientific videos. Earlier this year, Chiocchio initiated a water quality project at Indian Beach Park in the northern part of the city of Sarasota, Luckner added.

In making his case for a mini reef project in the Grand Canal, Chiocchio offered a history lesson about that island feature.

Archibald went on to dig the 9-mile-long Grand Canal in 1925, Chiocchio indicated. It only has one outlet, into Roberts Bay, he said. Yet, a shoal in Roberts Bay blocks 50% of the flow, he added, leading to “extremely low dissolved oxygen. On the bottom is a dead zone.”

Water quality in the canal has continued to decline over the 80-plus years it has been in existence, he told the SKA members. “At some point in the near future,” he added, the canal “will become a greater health hazard.”

“The Grand Canal is not happy,” he said. “It wants to be a productive estuary.” If its water quality were improved significantly, he added, the canal could be come a healthful environment for blue crabs, snook and tarpon, which are popular catches for recreational fishermen in the area.

First, Chiocchio said, the shoal should be removed from the mouth of the Grand Canal at Roberts Bay. “It has been there as long as anyone can remember, and no one seems to know how it was formed.”

Another shoal blocks water flow near the bridge over the canal on Midnight Pass Road, he noted. That shoal also should be removed, he added.

Then, in offering more details about the mini reefs, he showed the SKA members several slides depicting the structures.

The mini reefs are made of polypropylene, a plastic that is considered to have a life of 500 years — quite different, he stressed from “a garbage bag or a milk jug.” After barnacles have encased a mini reef, Chiocchio explained, the structure does not break down, as other plastics do, into micro particles. “It’s almost like a glue,” he said of the effect of the barnacles.

With two mini reefs at every dock on the Grand Canal, Chiocchio pointed out, “You’ve added some filtration” and are able to remove nutrients from the water that feed organisms such as the red tide algae.

Yet, the concern is whether agencies will allow mini reefs to be used, Chiocchio said.

The Florida Department of Environmental Protection (FDEP) does not require a permit if a person just wants to tie a bait bucket to the person’s dock, for example, he noted.

However, Howard Berna, director of the Environmental Permitting Division of Sarasota County, told Chiocchio that he was awaiting guidance from FDEP before making a recommendation on how county staff should handle mini reefs, Chiocchio pointed out during his presentation to the SKA members.

In response to a request for follow-up on Chiocchio’s comments, Berna wrote in an Oct. 7 email that county Planning and Development Services Department (PDS) “staff attended a demonstration installation earlier this year with the owner of Ocean Habitats at a location in Manatee County. Ocean Habitats designed floating ‘reef’ systems that can be installed under docks and [company representatives] are working with the Florida Department of Environmental Protection to determine how the state might permit or exempt these devices. PDS is waiting to hear the outcome from the state. Currently these structures are not exempt in Sarasota County and those interested in these devices are encouraged to wait until we have received input from the state.”

The prospect of grant funds

The mission of WCIND, its website explains, is “To preserve and enhance the commercial, recreational, and ecological values of waterways within the District we serve.” The district, the website adds, encompasses Sarasota, Manatee, Charlotte and Lee counties.

SKA directors expressed their support for the Fisheries Forum to apply for one of the annual WCIND grants, which are funded by property tax revenue dedicated to the work of the district.