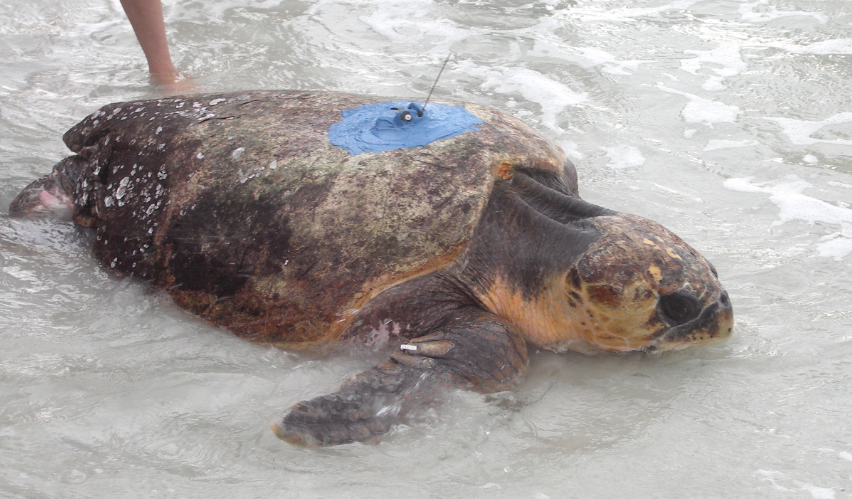 Murph is happily wending his way through the depths of the Gulf after a near-death experience off Turtle Beach.

According to Mote Marine Laboratory’s Turtle Stranding Team, “a large loggerhead appeared to be tethered to something underwater off Turtle Beach on Siesta Key. While the turtle could surface for air, it couldn’t get free. Mote Stranding Investigations Program Manager Gretchen Lovewell and Biologist Rebeccah Hazelkorn went to safely rescue the turtle, and enlisted the help of the Florida Fish and Wildlife Conservation Commission Law Enforcement Marine Patrol and helicopter, Sarasota County, and Longboat Key marine patrols to help.

“With the helicopter hovering above and providing a much-needed set of eyes to spot the turtle, the rest of the team motored out to the right spot and found a whopping 300-pound adult male loggerhead — one of the largest turtles ever rescued by Mote.

“‘Once we cut the line, we quickly realized that he had to come back to Mote’s Sea Turtle Rehabilitation Hospital,’ Hazelkorn said.

“At the hospital, Rehabilitation and Medical Care Coordinator Lynne Byrd assessed the situation, finding that the turtle had fishing and crab trap line tangled around his neck and flippers and even had two large shark hooks caught in his shell. ‘His entanglement was pretty severe and we know he was stuck in one place for nearly a week,’ Byrd said. ‘But he’s made a great recovery and we’re ready to send this big guy home.’”

The nickname comes in honor of Navy Lt. Michael Murphy, who was killed in Afghanistan in 2005. According to Mote, “Every Memorial

Day, Crossfit gyms nationwide host a ‘Murph’ workout — which Hazelkorn had done the morning of the rescue and so thought the name was a fitting tribute to a fallen officer.”

Murph was rescued on Memorial Day.

The large male is also a record setter. Murph was outfitted with a satellite transmitter that will provide scientists with data on his location as well as water temperature and the depth of his dives. He’s the first such male loggerhead to have such equipment in the Gulf. You can follow Murph’s travels at sea at seaturtle.org/tracking. Murph should appear under the Mote Marine Laboratory Sea Turtle Rehabilitation Hospital page.

The 2013 sea turtle nesting season is over.

Total nests in the region were down slightly from last year. Female loggerhead sea turtles laid 2,239 nests from the north end of Longboat Key south to Venice this year; last year’s total was 2,384, a 146-nest difference.

There were 30 rare green turtle nests this year, though, compared to seven last year.

Female turtles lumber ashore in the dead of night, crawl up the beach, scratch out a deep nest and lay up to 100 golf-ball-size eggs. Momma then crawls back to the Gulf of Mexico and heads out.

Females usually return to the place of their birth to nest.

Baby turtle hatchlings burrow out of the nests about 60 days after the nest was dug. Again at the dead of night, the babies scamper to the Gulf and swim like crazy or three days, reaching floating Sargasso seaweed offshore where they eat, rest, and grow.

Perhaps to bring the numbers into perspective — or to confuse the issue further — is another number: there were a total of 1,011 nests in the region in 2005.

Turtle experts speculate that the huge spike in nests of late may be due to better protection of adult turtles from shrimp net fatalities, resulting in greater numbers of egg-bearing females coming ashore.

Kudos to the hundreds of volunteers who get up at dawn to walk the beach, spot the nests, stake them out, then monitor the eggs until the hatchlings make their way to the Gulf.