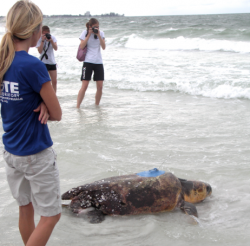 From now through the end of October, three different species of sea turtle will land on Florida’s Gulf coast beaches to lay their eggs.

People can help sea turtles that nest on Florida’s beaches at night by leaving the beach as natural as possible. To do this, beachgoers should remove beach furniture and other obstacles before sunset each day.

“Anyone spending time on Florida’s beaches can do something to help save Florida’s threatened and endangered sea turtles. People’s actions on the beach can have a positive impact on whether our loggerhead, leatherback and green sea turtles nest successfully,” said Dr. Robbin Trindell, who leads the Florida Fish and Wildlife Conservation Commission (FWC) sea turtle management program.

“Whether you are a resident or a visitor, remember to take beach furniture, boats and canopies off Florida’s sandy beaches at night so these items won’t block sea turtles attempting to nest,” Trindell said. “When departing at the end of the day, beach visitors should fill any holes dug in the sand so nesting and hatchling turtles don’t become trapped. Please be careful not to disturb nesting sea turtles by getting too close, shining lights on them or taking flash photos.”

Sea turtle nesting season runs from May 1 to Oct. 31 on all Southwest Florida beaches.

Using ID tags, Mote has identified 5,873 individual nesting females during more than 10,000 encounters, and has even fitted some sea turtles with satellite transmitter tags to track their migrations through the ocean.

Sea turtles are protected under federal law and any harassment or interference with a sea turtle, living or dead, is subject to penalty. If you witness anyone disturbing a turtle or find an injured or disoriented hatchling or adult, please notify agents with the Florida Fish and Wildlife Conservation Commission at 1-888-404-FWCC (3922), the local sheriff’s department, and/or Mote Marine Laboratory’s Sea Turtle Conservation & Research Program at 941-388-4331. If you find a dead or injured sea turtle, contact Mote’s Stranding Investigations Program at 941-988-0212.