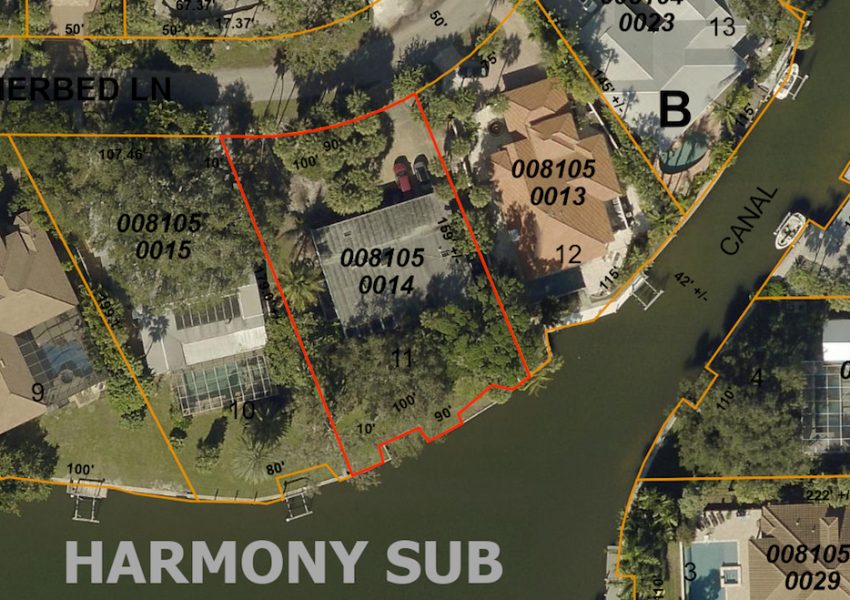 A fire reported in the early morning hours of Aug. 7 resulted in an estimated $475,750 in damages to the home at 4839 Featherbed Lane on the northern part of Siesta Key, the SNL has learned.

No injuries were reported; however, Sarasota County firefighters noted in the incident narrative that they were able to put eyes on only three of the 12 cats the homeowner told them were inside the residence. Additionally, the Fire Department report pointed out, “There was a large bird in a cage that did not survive the smoke conditions in the house.”

Sarasota County Property Appraiser’s Office records and the Fire Department report both named the owner of the single-story home as Barbara Martin of North Port.

Property Appraiser’s Office records indicate that she took over ownership of the house from a relative in December 2010.

The structure was built in 1960 with a total of 4,411 square feet, the Property Appraiser’s Office record shows. The main floor encompasses about 2,600 square feet, the Fire Department report noted.

The source of the fire was not determined, the report pointed out; “Unintentional” was marked as the cause of ignition.

Details in the report indicate that the home did not have smoke detectors.

Firefighters noted heavy smoke upon their arrival; the narrative said that weather conditions at the time were clear, still and dry.

Along with the fire engine and rescue unit from Station 13 on Siesta, the fire engines from Stations 11 and 12 assisted in fighting the blaze, according to the report. The other equipment was called to enable the rotation of manpower “throughout the incident,” the report said.

The fire was contained to the house, the report noted. Interior wall coverings — excluding drapes — and the wood used in construction of the house contributed the most to the spread of the flames, the report pointed out.

In late March, as Sarasota County Administrator Jonathan Lewis ordered the closure of all county-operated beaches and accesses, he also called for a halt on the Siesta Key Breeze’s operations.

County documents indicated that the step was taken to deter members of the public from trying to go to the beach.

And while the beaches fully reopened to the public in early May, the Breeze did not begin operating again until June 16.

During the June 17 quarterly meeting of members of the Siesta Key Chamber of Commerce — conducted via Zoom — Nathan Reid, general manager of the Breeze, reported that drivers received warm greetings from the public as they once more navigated between Turtle Beach Park and Morton’s Siesta Market in Siesta Village. “The reception was wonderful,” Reid said. “The constant waves and the thumbs up … It was awesome.”

About every other seat has been blocked off to ensure social distancing on the trolley, he pointed out. Thus, the Breeze has been able to ferry a maximum of 12 passengers at a time.

Further, Reid continued, Plexiglas had been installed to separate the driver from the passengers, and the drivers must wear masks.

At the end of every loop, he noted, passengers remaining on the trolley are asked to disembark at Turtle Beach Park, so staff can undertake “an additional wipe-down on the vehicle.” Riders have not complained about that at all, Reid said. “They appreciate knowing we’re going the extra mile for safety.”

Ann Frescura, executive director of the Chamber, told him that she and her staff at the Visitors Center handled numerous inquiries about when the trolley would be back in operation, after the service was halted.

In response to a question from Chamber Director Mike Gatz, manager of Gilligan’s Island Bar & Grill, Reid said that, just as in season, a driver with a full trolley will stop briefly when he or she sees passengers waiting at a stop, so the driver can tell them another trolley will be coming by soon.

“Good,” Gatz replied, adding that business owners and managers were really happy to have the Breeze back on the road. “It’s very busy on the Key right now.”

Reid said he believes most people are understanding about the circumstances resulting from the pandemic.

Then, asked if it would be better for the driver to just put a sign in a trolley window, indicating when the Breeze is full, instead of having to stop, Reid explained that that would take a lot more time. The driver almost constantly would be taking the sign down and putting it back up, he added. A quick stop with an explanation to waiting people is more efficient, Reid said.

Finally, Reid pointed out that he and his staff used the trolley’s down time to work on rewiring vehicles to effect significant improvements to the reliability of the Breeze app, which riders can use to track its progress when they are at one of its stops. Other improvements were in the works, Reid added.

In response to a SNL request for ridership totals for the Breeze in June and July, Media Relations Officer Brianne Grant said the total from June 16 through June 30 was 5,162. For the month of July, she added, the figure was 8,051.

The Siesta Key Chamber of Commerce routinely promotes the Breeze in its monthly newsletters. This month, for example, a flyer included in the newsletter notes, “Safety precautions and social distancing in place,” along with stating that the hours of operation are 8 a.m. to 8 p.m. Sunday through Thursday and 8 a.m. to 10 p.m. Fridays and Saturdays.

Update on a trolley shelter at Siesta Public Beach

A Siesta resident recently contacted the SNL about a new bus shelter installed on Beach Road in front of the Fire Station No. 13 site, where the new building is under construction.

While appreciative of the feature for riders of the Siesta Key Breeze and Sarasota County Area Transit (SCAT) buses that operate on the island, the resident nonetheless wondered why the structure was placed about 550 yards south of the “busy entrance to the beach.”

It would make more sense, the gentleman added, to have a shelter where, he suspects, demand is far greater for it.

Regular readers will recall that Commissioner Christian Ziegler has been a staunch advocate for a bus shelter at Siesta Public Beach — especially after he and his young daughters spent about 20 minutes on a spring day last year, waiting for the trolley to arrive.

On May 8, 2019, when Ziegler asked staff about creating shade structures for trolley passengers, Nicole Rissler, director of the Parks, Recreation and Natural Resources Department, explained that she and her staff would be working with SCAT and Public Works Department staff members to determine funding sources for such a project.

Whatever can be done to improve the situation, Ziegler responded, “would significantly improve the trolley experience …”

In checking county Capital Improvement Program (CIP) records for the current fiscal year — which ends Sept. 30 — the SNL was reminded that SCAT had designated several stops on the Key for new bus shelters. One of those was planned for the intersection of Beach Road and Midnight Pass Road, which is close to the Fire Station 13 site.

The SNL also asked county staff for an update about a shelter at the public beach.

In an Aug. 13 response, county Media Relations Officer Drew Winchester explained that planning indeed is underway for a bus shelter near the main entrance to the beach park. That structure likely will be will be “a bit larger” than the one near the Fire Station 13 property, he noted in his email. That will necessitate the traditional design and construction process staff pursues, Winchester added.

He had no further details at that point, he continued, “but SCAT personnel indicated [the shelter] was forthcoming.”

On Aug. 6, Gov. Ron DeSantis signed a new Executive Order that rescinded travel restrictions for visitors from the Tri-State Area of New York, New Jersey and Connecticut, the Siesta Key Chamber of Commerce announced to its members in an email blast.

On March 24, DeSantis implemented those restrictions after New York, especially, became a major center where spread of the novel coronavirus was documented. That order said, “Florida is experiencing an increase in individuals fleeing to Florida from states where ‘shelter-in-place’ orders are being implemented …” Therefore, DeSantis called for all persons entering Florida from the Tri-State Area “to isolate or quarantine for a period of 14 days from the time of entry into the State of Florida or the duration of the person’s presence in the State of Florida, [whichever] is shorter.”

That did not apply to airline employees or “those performing military, emergency or health response.”

Additionally, the new Executive Order rescinded the previous COVID-19 screening requirements for restaurant employees, the Chamber email blast said. Staff members who previously tested positive for the virus “do not need to receive two negative tests before they can come back to work,” the Chamber pointed out. “Employers are required only to implement screening protocols pursuant to CDC [U.S. Centers for Disease Control and Prevention] guidance.”

The CDC website says a person can end home isolation as follows:

• “10 days since symptoms first appeared and

• “COVID-19 symptoms have improved (for example, cough, shortness of breath).”

However, the website does add, “Note that these recommendations do not apply to persons with severe COVID-19 or with severely weakened immune systems (immunocompromised).”

Further, DeSantis’ new Executive Order eliminated the requirement that employees who have traveled through an airport in the past 14 days be prohibited from working in a restaurant.

Pamela A. Garvin, trustee of the Pamela A. Garvin Survivors Trust of West End Avenue in New York City, paid $4,050,000 for Unit 101. Garvin is an attorney, the SNL found in an online search.

The highest price for a solitary condominium in the project — Unit 201 — was $4,250,000, based on the Clerk of Court’s records. That was paid by trusts established by a couple listing a Chicago address.

A county initiative to improve drainage, as well as the sidewalk and shoulder, on Higel Avenue from Little Pond Lane to Somerset Drive has begun, county staff reported in the Aug. 10-16 Construction — One Week Look Ahead report produced by the county’s Capital Projects Division.

The roadway also will be resurfaced in that area, the report noted. Weather permitting, that undertaking will be completed in the fall.

Crews have begun clearing the drainage easement and have started the shoulder work, the report said.