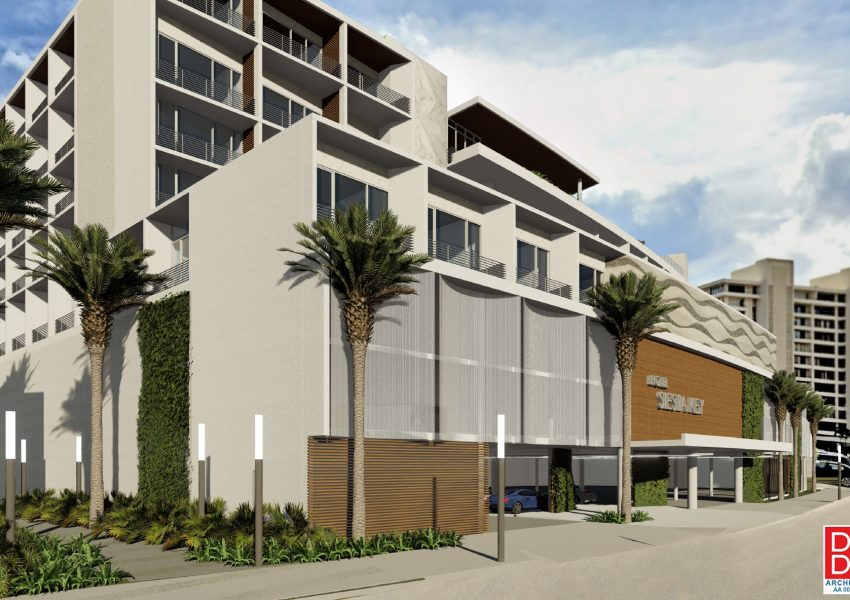 Plans for the Hotel Siesta Key, a new boutique hotel in Siesta Key Village are moving ahead. As the Siesta Sand reported in July, a Pre-Application Development Review Request was submitted to the Sarasota County Planning Department in May. As described in the Pre-Application, the proposed hotel would be an eight-story, 80-foot high, 170 room structure. “We will submit a formal application to the Planning Department in approximately 60-90 days,” Robert T. Anderson, one of four owners of the venture told the Siesta Sand. “That application,” Anderson advised, “will be preceded by neighborhood meetings and continued personal interactions with business and community groups.”

As of late July, Anderson told the Siesta Sand, his group has completed “about 42 individual presentations.” Meetings have been held with local area organizations such as the Siesta Key Chamber of Commerce, the Siesta Key Association and the Conservation Foundation. “We’ve been very pro-active with community involvement,” he stated, noting that “the majority of the feedback has been very positive and we have been applauded on the look and style of the structure.” Anderson went on to say that “we’re trying to get as many eyes on the project as possible.”

In discussing design, construction and other future plans for the project that he noted, is still at a very early stage, Anderson said that the group is committed to working with local Sarasota businesses to build and manage the project. “We are keenly in-tune with supporting local businesses on the Key and in the Sarasota area.” Although reviews of potential construction firms, as well as the many other supporting businesses that go along with the development of a large new hotel have yet to be finalized, Anderson spoke enthusiastically of the project’s architect, Sarasota based architect Mark Sultana, of DSDG Architecture.

Sultana, Anderson said, “understands what fits Siesta Key. He has impeccable attention to detail and a good eye for placing the right products in the right places.” The hotel’s initial design plans reflect the Sarasota School of Architecture’s modern style, which Sultana’s own design embraces. The award-winning DSDG architectural firm has been creating commercial and residential properties in Sarasota, Long Boat Key and Siesta Key for close to 20 years. A graduate of the New York Institute of Technology, Sultana is a past president of the Gulf Coast Chapter of the American Institute of Architects. He is active in the National Council of Registration Boards and the Florida Green Building Coalition. Sultana founded DSDG Architects in 2001.

“We have been working on this project for 10 years,” Anderson told the Siesta Sand. “It’s not a recent happening. We all live here and have a vested interest in the community.” He noted that “in 2005-2006 we started looking at all 44 available commercial lands on the Key.” Leading factors in the selection process of the site where the future Hotel Siesta Key is planned included easy beach access, a location where hotel guests would not need a car, as well as walking distance to restaurants, shops and other amenities in Siesta Key Village. The hotel, he pointed out, is not intended to be for long-term stays. “We want this hotel to be a one-and-a-half to a two-night stay location,” he said. To avoid traffic congestion, Anderson said that the planned entrance will be on Calle Miramar, steps away from Ocean Boulevard and Beach Road. “We don’t want to be an interrupter to the commercial district.”

Managing a real estate project of this scope in the age of Covid-19 presents challenges. “Our first neighborhood workshop may have to be virtual,” said Anderson. As with other efforts that would normally be held in person and around conference room tables, Anderson noted that many meetings and presentations have had to be held on-line.

In discussing the next steps for the anticipated Hotel Siesta Key, Anderson said that the group is currently working to meet requests from the Sarasota County Development Review Committee. “Taking a very broad look at the recent matrix of time lines shows that it will be 18-24 months before we have shovels in the ground,” said Anderson. He anticipates “another 15 months to finish the hotel interior.” When asked to estimate a long-range completion date and future opening, at this time, Anderson explained, the new Hotel Siesta Key is “two to four years away.”