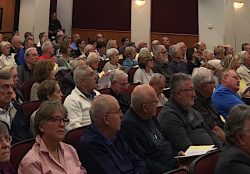 The majority of the Sarasota County commissioners made it clear in late January that they were uncomfortable with the language of a proposed zoning text amendment regarding commercial building setbacks on Siesta Key. As a result, they voted unanimously to continue a public hearing on the issue until April 11.

“Put very simply,” Commissioner Paul Caragiulo said on Jan. 30, “there’s just a lot of question marks here. … I’d just like to have our staff dive a little more into the planning piece of this.” Thirty years from now, he indicated, he did not want to see unwelcome changes on Siesta Key and reflect on the Jan. 30 hearing with the realization, “That’s kind of what did it, right there.”

Many of the 19 Siesta residents opposed to the project who addressed the board during an almost three-hour-long public hearing focused on similar concerns.

“One of the primary worries … is the fact that one chip away at [the Siesta zoning regulations] is going to open Pandora’s box,” Catherine Luckner, vice president of the Siesta Key Association, told the board. “It’s not unrealistic to be afraid of this.”

In the meantime, the commissioners suggested Charles D. Bailey III, the attorney for Clayton and Diane Thompson — owners of Clayton’s Siesta Grille on Old Stickney Point Road — work with their Planning and Development Services Department staff on a more detailed version of the amendment’s language. Bailey had filed the petition for the zoning modification on the Thompsons’ behalf.

After a 4-1 vote on reopening the public hearing at one point, so Bailey could come back to the podium, Commissioner Alan Maio asked whether Bailey would like the board to continue the hearing, “so that you can work with staff.”

(Chair Nancy Detert had opposed reopening the hearing, stressing her view that staff, not an attorney working for paying clients, should be charged with writing any proposal for amended language in the Siesta Key Overlay District (SKOD) zoning regulations.)

During the hearing, both Caragiulo and Commissioner Charles Hines focused on the lack of clarity in the amendment Bailey had provided.

Hines noted that the language called for the County Commission to have final say on any commercial setback, through a special exception process. “The burden’s got to be shifted … to the petitioner,” Hines said, “and it’s got to be some pretty extensive criteria,” so the majority of the residents of Siesta Key would feel comfortable with the process.

“I’m not voting for a 50-foot-plus building 2 feet from the front setback,” Maio told Bailey.

Although he does not live on Siesta Key, Maio acknowledged, it is in his district. “I spend more time with you [residents] than any other group,” he told the audience members filling the Commission Chambers in downtown Sarasota.

Even though the island’s residents represent only about 3% of the total population in the county, Maio told the hearing attendees, “You are the engine that drives our visitors,” with Key accommodations annually accounting for about a third of the county’s “bed tax” revenue.

In early 2017, Bailey worked on behalf of Siesta Acquisitions LLC, whose principal is Dr. Gary Kompothecras of Siesta Key, to gain a determination from county Zoning Administrator Donna Thompson that a 2-foot street setback was allowed for any commercial building in the SKOD. (Kompothecras is known for his 1-800-ASK-GARY advertising for his chiropractic clinics.)

In response to Bailey’s 2017 request, Thompson issued the opinion that the zoning regulations call for a minimum street setback of 25 feet for any building over 35 feet in height, up to a distance equal to half the height of the structure. Because 85 feet is the maximum height allowed for any structure on the barrier islands, the maximum setback would be 42.5 feet, based on Thompson’s written determination.

When Bailey appealed Thompson’s assertion to the county’s Board of Zoning Appeals in June 2017, that board voted to uphold Thompson’s position.

Bailey has stressed since late 2016 that Kompothecras has not submitted any application to the county for a specific project. Nonetheless, Bailey acknowledged during the Jan. 30 public hearing, “There would be the desire to bring a quality boutique hotel [to the island that] would need to be taller than 35 feet and could not be built with a 25-foot setback.” The focus of the hotel plan, he continued, is Old Stickney Point Road, “which has some blighted old empty buildings.”

Through limited liability companies, Kompothecras owns the Old Stickney Point Road parcel where the former Fandango Café stands, as well as the adjacent site of a self-storage business.

Debating a course of action

After listening to the testimony during the hearing, Detert pointed out to her colleagues that because there is “no particular project … there’s no emergency going on here.”

She added, “We have great paid staff. … Let’s turn down this project. Let’s let our staff to work on [the amendment and hopefully come up with something rather than … compromise at [the dais] …”

Both Commissioners Michael Moran and Maio pointed out, however, that the special exception process entails a thorough vetting of a project, including a neighborhood workshop for people in the area surrounding the proposed site. A project “might be very, very different” at the end of that process, Moran said, compared to what it was at the beginning.

On the other hand, Hines noted, “Siesta Key is unique. It’s a village; it’s not a downtown.” Therefore, if the potential opens up for commercial buildings to be constructed much taller than two stories close to the sidewalk, he added, “you lose that village feel.”

An abundance of opposition

The first person who addressed the board during the public comments was Paul Nicholson, a Midnight Pass Road resident and a professional developer. “Zoning is there to protect communities,” he said. On Siesta Key, a one- or two-story building next to the sidewalk is fine, he added. “An 8- or 10-story building by the sidewalk is ridiculous.”

Lourdes Ramirez, president of the Siesta Key Community, told the commissioners that if they approved the proposed language, they would be addressing proposals “all the time” for 8-story commercial buildings on the island.

Moreover, the two primary Siesta roads on which commercial zoning districts are located are narrow, she added. An 85-foot structure 2 feet from the sidewalk is “going to overwhelm Ocean Boulevard and Old Stickney Point Road.”